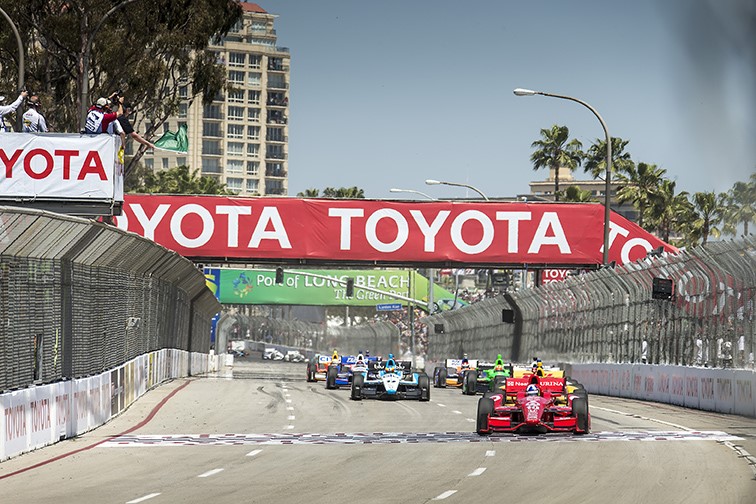 With a variety of entertaining activities for the entire family, the 2014 Grand Prix will feature the second round of the 2014 IndyCar Series, according to the schedule announced by INDYCAR officials today. The 2014 IndyCar Series is expected to include celebrated drivers such as Juan Pablo Montoya, the Indy 500 winner and former CART champion who is returning to the series after 13 years competing in Formula 1 and NASCAR; three-time series champ Dario Franchitti; Long Beach winners Helio Castroneves, Ryan Hunter-Reay and Will Power, along with Scott Dixon, Marco Andretti and defending Long Beach winner Takuma Sato battling wheel-to-wheel on the famed 1.97-mile, 11-turn circuit through downtown Long Beach.

In addition to the IndyCar Series, the 2014 Toyota Grand Prix of Long Beach will showcase continuous on-track action from other racing series including the TUDOR United SportsCar Championship, featuring the top sports cars in North America; the Super Drift Challenge under the lights; the Pirelli World Challenge, and Indy Lights.

“We have just concluded our highest ticket renewal for the past five years, and now all the remaining seats are available to the public for sale," said Jim Michaelian, president and CEO of the Grand Prix Association of Long Beach. “As the number one street race in America combined with all that the City of Long Beach has to offer, the Toyota Grand Prix of Long Beach continues to be the best family entertainment value in Southern California."

Ticket prices for the three-day event range from $28 for a Friday General Admission ticket to $135 for a three-day ticket that includes Sat./Sun. reserved seating in grandstand upper levels. Pre-paid parking packages are also available, along with handicapped seating, IndyCar Paddock passes, Super Photo tickets and a wide variety of Hospitality Club packages.

Fans can select and pay for their 2014 Toyota Grand Prix of Long Beach seats, parking and paddock passes online at gplb.com. Ticket orders can also be placed by calling the toll-free ticket hotline, (888) 82-SPEED. A printed ticket brochure that includes a circuit map, ticket prices, order form and other information can be obtained by calling the hotline.