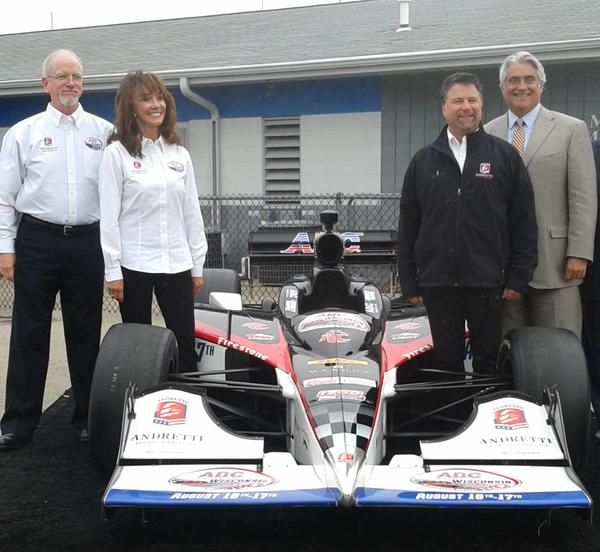 Andretti Sports Marketing announced today that they have teamed with ABC Supply Co. Inc. to bring INDYCAR racing excitement back to the Milwaukee Mile at Wisconsin State Fair Park on August 16 and 17. ABC Supply Co. Inc. will serve as the title sponsor for the IndyCar Series race at Milwaukee IndyFest for the 2014 and 2015 seasons.

In 2012, Michael Andretti committed to the Milwaukee market to rebuild the event and keep INDYCAR racing in the state of Wisconsin, by reviving the open-wheel event at the historic Milwaukee Mile. Andretti Sports Marketing worked diligently in the market and has now set out a two-year plan to build on the success of Milwaukee IndyFest with its partner ABC Supply Co. Inc.

"We're very excited to sponsor the race in our home state of Wisconsin at the historic Milwaukee Mile," said Diane Hendricks, ABC Supply Founder and Chairman of the Board. "We have a large number of associates and customers in the Wisconsin area and are happy for the opportunity to support the oldest and longest operating motor speedway in the world. As a sponsor of A.J. Foyt Racing for almost 10 years, we're thrilled to play a small part in open-wheel racing in Wisconsin."

ABC Supply Co. Inc. is the largest wholesale distributor of roofing in the United States and one of the nation's largest distributors of siding, windows and other select exterior building products. Having celebrated its 30th anniversary in 2012, ABC Supply Co. Inc. has more than 400 branches in 45 states, employing approximately 7,000 associates nationwide.

"Racing at the Milwaukee Mile, the world's longest running race track, is always exciting. We're thrilled to announce the ABC Supply Wisconsin 250 at Milwaukee IndyFest, a new title sponsor and a new date to continue the tradition of IndyCar racing at the Mile," said Kevin Healy, Managing Director for Andretti Sports Marketing. "We appreciate the leadership of Diane Hendricks and ABC Supply Co, Inc. has provided to ensure that an international motorsports event remains in Wisconsin."

In addition to the IndyCar Series, open-wheel feeder series Indy Lights and the Pro Mazda Championship will return for the Aug. 16-17 Festival of Speed that will once again boast an infield midway, beer garden and live music. Tickets to the two-day, family-friendly event go on sale Nov. 13 and will be available online at www.milwaukeeindyfest.com.