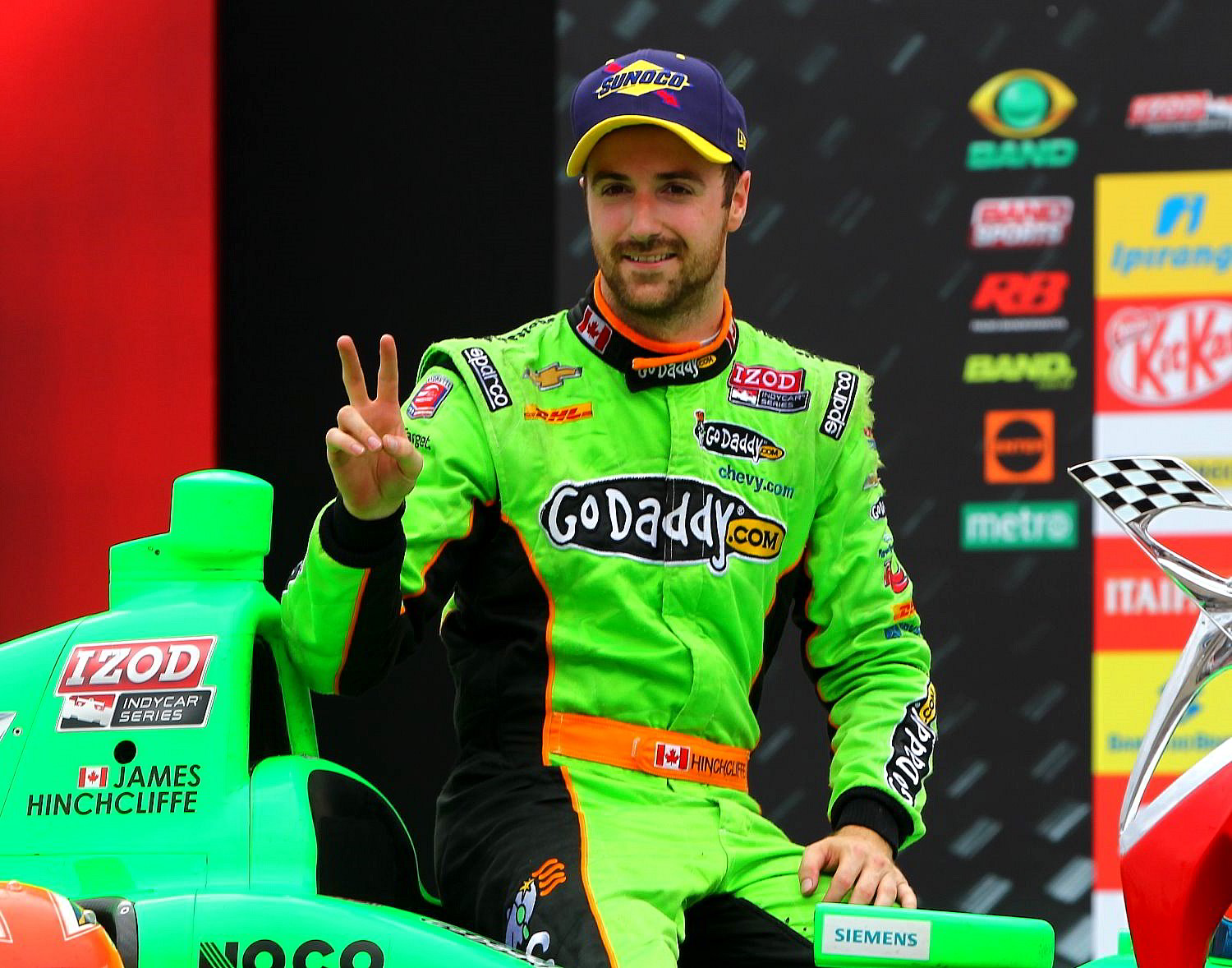 For sure, James Hinchcliffe will drive in Saturday’s IndyCar Series season-finale MAVTV 500 at Auto Club Speedway for Andretti Autosport and will wear red gloves in honor of his childhood hero.

Beyond that, it’s anybody’s guess as to what the future holds for the 26-year-old Canadian from Toronto. He’s the hottest free-agent in sports this side of the Yankees’ Robinson Cano as his two-year contract will expire at the end of the 250-lap race in Fontana.

It’s quite unusual for an IndyCar Series driver to be in a position where several teams are interested in his services. There’s always the possibility that Michael Andretti will re-sign him. Chip Ganassi has been reported to be interested in Hinchcliffe, as is KV Racing, looking to replace Indianapolis 500 winner Tony Kanaan.

It could also be the very last race for the self-styled mayor of Hinchtown (his website) in a car sponsored by Go Daddy.com. There’s quite a bit at stake for Hinchcliffe besides the race.

“We’ve had a great year and have strong momentum, and for a guy needing to solidify his future, it’s nice to have some options," said Hinchcliffe, who’s ninth in the points race with three victories. “It’s a nice change from knocking on everyone else’s door seeing if they’d even be willing to throw you in their car.

“That’s what I’ve had to do throughout my career, so this is a welcome change of pace."

Hinchcliffe, who replaced Danica Patrick in the Go Daddy car, is seen in IndyCar circles as a high-profile driver who can attract a major sponsor. His goal is to win a championship.

“We all get into this sport to win races and championships. It’s not about anything else," said Hinchcliffe, who has a pair of road course wins and an oval triumph in Iowa. “When you’re in a position where there are multiple opportunities, you have to judge what’s best for you in your pursuit of those goals.

“I’m sure a lot of drivers have lost a lot of sleep trying to decide what to do. You can’t predict what’s going to happen."

It’s not going to be easy for Hinchcliffe to decide on his next step.

“Obviously, the team I’m with is an incredible team. They gave me a chance to prove myself as a winner at this level," he said about the Andretti team he joined in 2012. “The chemistry within the team has been well-documented, so there’s nothing wrong on the human side of it. There’s a lot of things that are right."

Hinchcliffe comes into Fontana with a bit of momentum. He was third in the series’ last event in Houston.

“This is one of the toughest tracks we race on all year. The low downforce configuration and the seams wreak havoc for us. It’s so easy to be caught off guard, and so 500 miles there feels like 1,000 anywhere else," he said about the two-mile superspeedway. “That said, the team had a strong test there a few weeks ago, and hopefully that translates into a good package on the GoDaddy car .

“It would be great to end the year with a podium and head into the off-season with some momentum."

He’ll be making his second start at ACS. In 2012, he was three laps behind winner Ed Carpenter and finished 13th. Racing ovals, he said, “takes a different type of skill-set. It’s cool."

That wasn’t his initial reaction.

“I hated it in first year," he said the 2011 season with Newman/Haas Racing, “because I didn’t understand them." Regardless, Hinchcliffe won rookie of the year honors for finishing 12 in the series with seven top-10 finishes.

The year before stepping up to the IndyCar level, Hinchcliffe finished second in the Indy Lights points racer for Team Moore with three wins. More importantly, he was also named winner of the Greg Moore Legacy Award.

“He was my hero growing up," Hinchcliffe said of the fellow Canadian who died in a 1999 CART accident at ACS. As a tribute to his countryman, Hinchcliffe wears red gloves as did Moore.

“He was a big part of my life," he said, noting he was 12 years old and driving go-karts at the time of the accident. “I was at a very influential age and he had a big impact on me."

Hinchcliffe will be in a similar position Moore was in 1999. While Hinch is pondering his future, Moore was in his last race before joining Penske Racing, a ride that eventually went to Helio Castroneves.

“It’s not the most complex thing," Hinchcliffe said about his upcoming decision. “I’m in no rush. You have to weigh all the pros and the cons, and the decision, at the end of the day, has to be about who you think will give you the best shot to be a winner and a champion.

“There are other aspects that are involved, but those things will take care of themselves if you’re in the right situation. For me, the primary choice has to be about where you can have the most amount of success. The rest are all the small details to be sorted out afterward." Dailynews.com