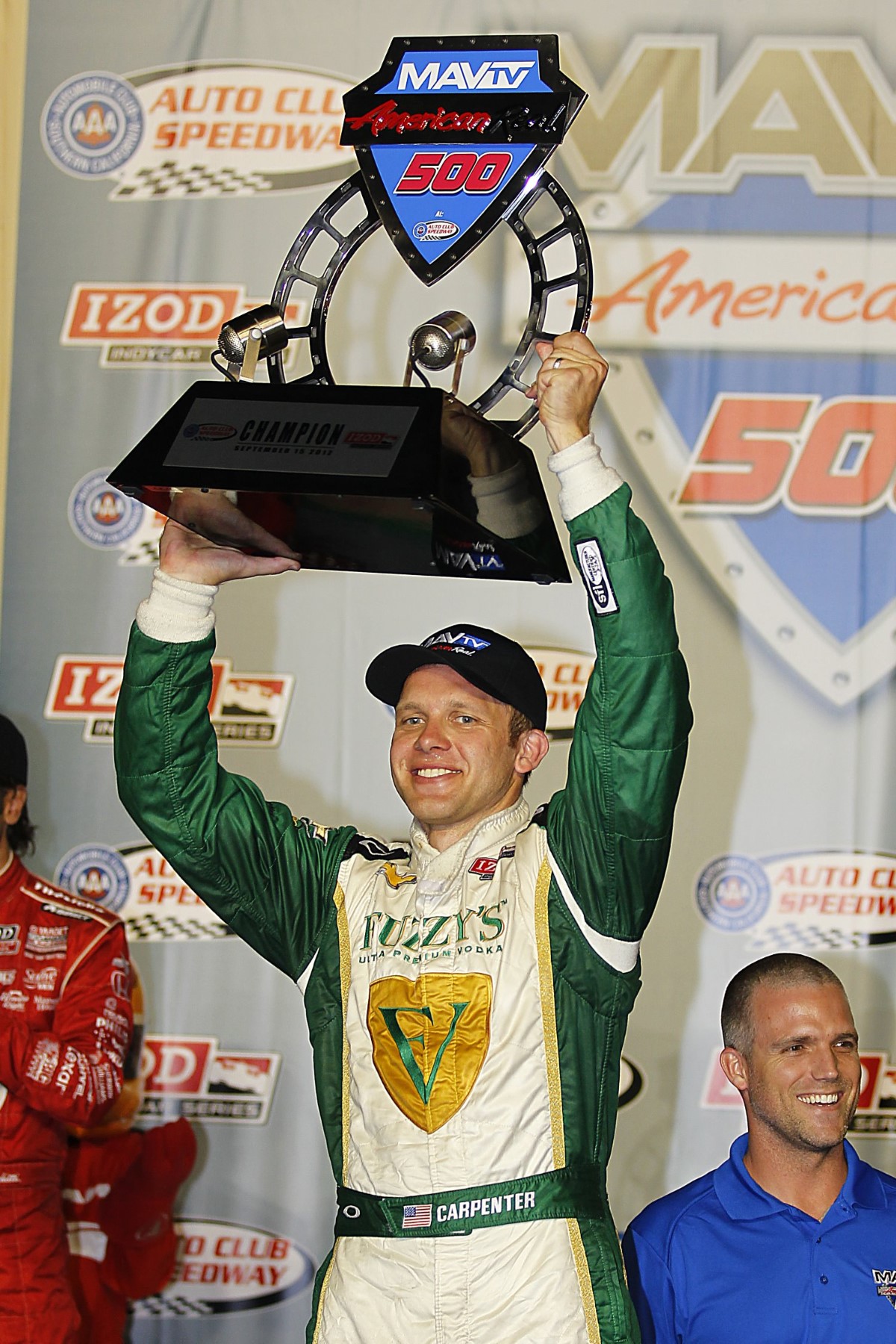 A funny thing happened on the way to Ed Carpenter’s last victory.

Carpenter won last year’s season-ending Mav TV 500 at Auto Club Speedway for his second career IndyCar victory. He won on a last-lap pass, during which he went by Dario Franchitti.

It’s easy to understand why all but Carpenter and his team might have been distracted en route to the victory. Ryan Hunter-Reay and Will Power were in the middle of an epic championship race. Power crashed early in the race but miraculously returned. All eyes seemed to be on the points race between the two drivers, which Hunter-Reay eventually won.

It’s as if one of Carpenter’s victory was all but forgotten.

“That’s the way it goes," Carpenter recalled. “There was a great championship battle between Will and Ryan and it was good to see two Chevys going at it.

“It would have been nice if I got a little more air time, but at the same time I still won the race. That’s fine. I won’t be upset if this year with the championship going on and we dominate the race and not get a bunch of air time. How can you not show that?

“There’s not enough ways to show that many cars when they are on different parts of the track."

Carpenter, who has been racing for his own team for two years, will be trying to accomplish an IndyCar first when he seeks a third consecutive season-ending victory. He won the 2011 finale at Kentucky Speedway, when he raced for Sarah Fisher’s team.

Only one other driver — Sam Hornish Jr. in 2001-2002 at Texas Motor Speedway — has won the two consecutive series finales.

But it will not be an easy task. The 32-year-old has had difficulty replicating anything close to a podium finish this season. His best finishes this season have been fourth-place finishes at Texas and Iowa. He is 18th in series points and has only two other top 10 finishes, a 10th in the Indianapolis 500 and ninth at Pocono.

Carpenter said an exceptional test session led to last year’s victory. But that might have changed this season.

“More people have figured out where high lines need to be," he said. “I feel like I have to be somewhere else (on the track) to be better. That’s the beauty of this race track. There are a lot of options.

“It’s up to us teams to figure out how to make the car work, where we want it to work."

During a test session last month, Carpenter’s car was the ninth-fastest car of 23 that ran on the 2-mile oval. He ran at 215.7 mph.

“I wish I could use all four grooves," he said. “That is one thing we’re working on, using more of the track."

There were other cars on the track, but the tests were without drafts and difficult, he said.

“It’s always challenging if you’re out running by yourself," he said. “The track can make you feel like you’re not very good at all. You look around and no one else is looking that hot either. It can be confusing. You have to pay attention to what others are doing.

“If you look at yourself, it’s hard to tell if you’re good or bad."

Before last season, Carpenter’s best finish at Fontana was 13th in 2003. dailybreeze.com