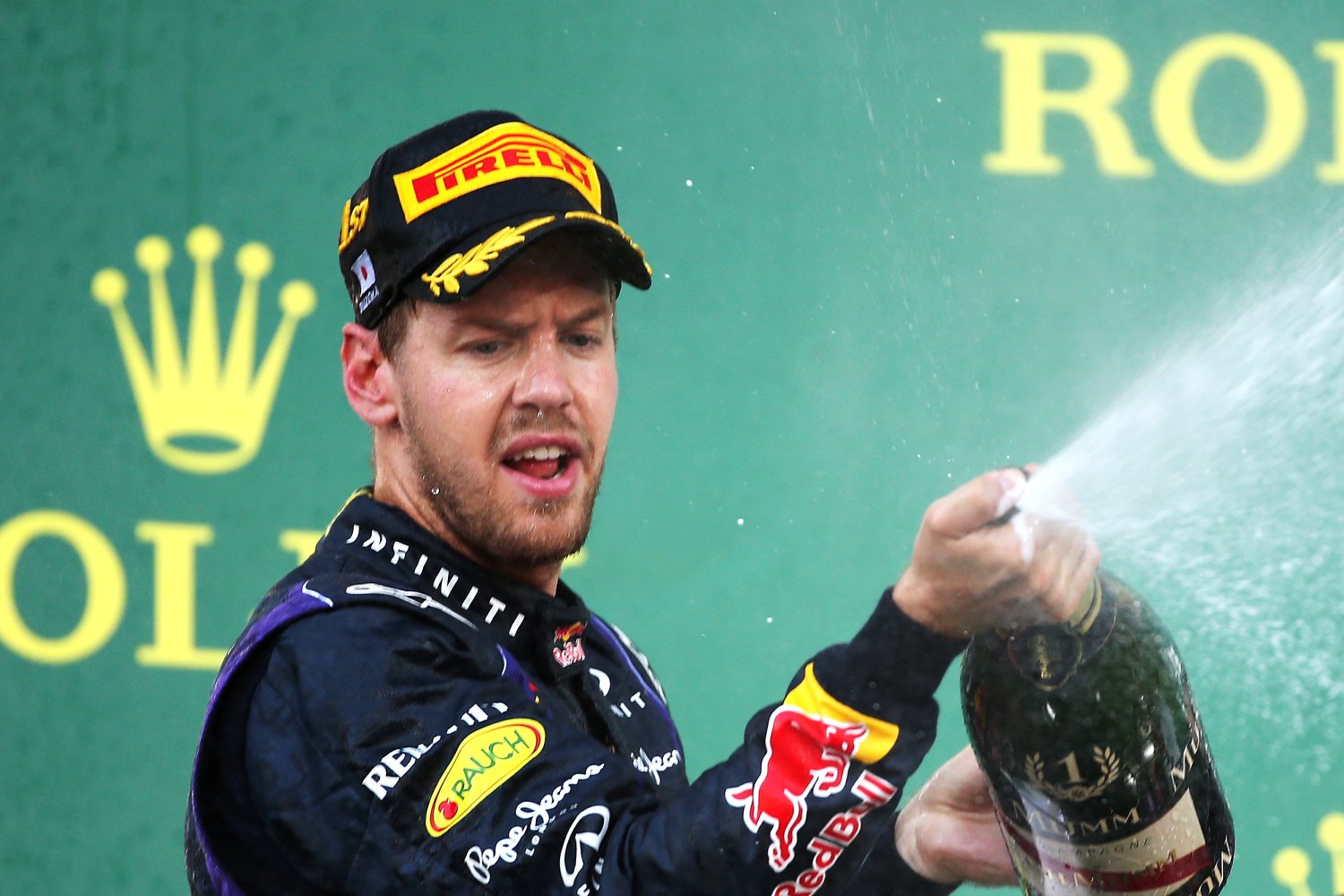 "I hope it (the championship) is still exciting when formula one comes to America," former world champion Mario Andretti is quoted by Germany's Welt newspaper.

The Austin race takes place in mid November, a week before the season finale in Brazil.

No one in the paddock thinks the title race will still be alive by then. Not even Sebastian Vettel's championship challenger, Fernando Alonso.

"It doesn't matter if Vettel wins (the title) here or not," the Spaniard said on Saturday in Japan.

If Alonso is ninth or lower on Sunday, Vettel needs to win at Suzuka to seal his fourth drivers' crown. Alonso qualified eighth, and Vettel is behind his teammate Mark Webber on the front row.

In the race, Vettel may still not have use of his KERS system, after Saturday's problems.

"We have to find the issue and solve it," the German had said after qualifying.

"That's plan A. If that doesn't work we have to race without KERS," added Vettel.

Alonso, whose frustration with his situation at Ferrari has been clear for some time, said he is now used to being beaten by a Red Bull.

"For four years they've been ahead by a second a lap," the Spaniard, outqualified by his departing teammate Felipe Massa, said at Suzuka.

Marussia crash led to de Villota death – family
(GMM) Maria de Villota's family have confirmed the testing crash at the wheel of a Marussia last July led to her death on Friday.

"Maria left us while she was sleeping as a consequence of the neurological injuries that she suffered in July of 2012," sister Isabel said.

De Villota's family added that the "forensic doctor" had come to that conclusion after an autopsy.

Investigations into the incident at Duxford airfield last July are still taking place.

A spokesperson for the UK's health and safety executive said the organization "would expect to be kept informed of any new evidence".

De Villota was cremated in Seville on Saturday before a private ceremony, the Spanish news agency EFE said.

F1 drivers will mark the death of their female colleague before the drivers' parade on Sunday at Suzuka, the Grand Prix Drivers' Association announced.

Honda 'would like Alonso at McLaren' – Whitmarsh
(GMM) Martin Whitmarsh has admitted Honda would like Fernando Alonso to be powered by its Japanese engines in 2015.

The McLaren boss had triggered the Alonso-to-Woking rumors recently in Singapore, amid suggestions the Spaniard is increasingly unhappy at Ferrari.

"He has a contract with Ferrari," Whitmarsh told the Spanish sports newspaper AS at Suzuka. "In the future, who knows."

He admitted letting Alonso leave McLaren after just one season in 2007 was a mistake.

"I've always regretting losing him in 2007," said Whitmarsh. "He is now a mature and very strong driver. Yes, it was (a mistake)."

Undoubtedly, Whitmarsh is trying to right the wrong now. He also says Honda, the Woking based team's new V6 engine supplier for 2015 and beyond, is keen.

"But to be clear, we have not had any negotiations with him. Fernando has a contract with Ferrari."

Whitmarsh, however, said Alonso has been targeted because he is perhaps the best driver in F1.

"Although this may seem unfair to Ferrari, he gets more from what the car deserves.

"Sebastian (Vettel) is also doing a great job. They are both top drivers. But Sebastian has always been in a stronger car."

Asked his opinion about why Red Bull has dominated so much in recent years, Whitmarsh answered: "First you would have to say that Red Bull spends a lot of money. It's a very important factor.

"Besides that, they are doing a great job. Adrian (Newey) is key, but Sebastian is very consistent and I think he should get a bit more credit."

Britain's Mirror newspaper on Sunday said Jenson Button has agreed just a one-year deal to stay at McLaren in 2014.

It leaves the door slightly ajar for Alonso to join the Briton next year, in Mexican Sergio Perez's place.

"This year was not as good as Sergio wanted it to be. But beating Jenson Button is not so easy.

"Unfortunately the car hasn't been as good as we would like, so we shouldn't be too hard on the drivers. Has Jenson done a good job this year? Yes. Has Sergio done a good job? Yes.

"At the moment, I don't think so," said the Briton when asked if Brawn is heading to Woking.

"He is very experienced and is a major asset for any team, but right now I don't think he is thinking of coming to McLaren," added Whitmarsh.

McLaren boss Martin Whitmarsh would not entirely agree with that statement.

As the F1 paddock weighs up Vettel's place among the sport's greats on the eve of his fourth world title, Whitmarsh thinks the German's biggest problem has been Fernando Alonso.

"I think generally it is thought that Vettel gets the points the car deserves, while Fernando has gone a step further than that in the past couple of seasons," he told the Spanish sports newspaper AS.

"Alonso is the reason Vettel doesn't get the recognition he deserves," Whitmarsh added.

But 1997 world champion Jacques Villeneuve, once a fierce critic of Vettel's, fiercely disagrees.

"Whoever says that the car is better than Vettel needs to look at how he has destroyed Mark Webber, year after year," Villeneuve told Bild am Sonntag newspaper.

Even Red Bull's own Dr Helmut Marko would agree with that.

"We give both drivers the same car," he insisted. "But how often has Mark won against Vettel?" he asked rhetorically.

That, however, may be entirely the cause of Vettel's image problem. He now beats the retiring Australian veteran Webber consistently, but – at the wheel of an Adrian Newey-penned car – is that enough?

Eddie Irvine told the British broadcaster Sky recently: "If you don't have a good car, you can't win it (the championship) unless you're Michael Schumacher; unless you're Ayrton Senna.

Nico Rosberg would agree that the 'Newey' and 'Webber' factors do not help how people perceive Vettel's achievements.

"For sure it would help his perception if he had – and nothing against Mark who is a fantastic driver and a great person – if he had a Fernando-caliber driver next to him," he told the Telegraph.

Another German, Nico Hulkenberg, agrees: "I think if he had a Kimi next to him, or Fernando at Ferrari, and still came out on top then it's fair to say he would be regarded even more highly."

Magic number is '5' for Vettel
(GMM) The magic number for Sebastian Vettel is five.

Winning at Suzuka on Sunday extended the German's winning streak to five races.

But winning on Sunday was not quite enough to seal Vettel's fourth world title.

Because Fernando Alonso finished fourth, not ninth, the Spaniard's mathematical chances remain alive for at least another race, in India in two weeks.

But all Vettel has to do in India is revert to the magic number 5, even if Ferrari's Alonso wins that race, and also the following races in Abu Dhabi, Austin and Brazil.

Fifth place for the dominant Red Bull will mean Alonso can no longer chase down Vettel, 26, in the points standings.

"It looks very good at this stage," Vettel admitted on the Suzuka podium, "but it's not over until it's over."

Alonso, however, has conceded defeat.

"We have different goals now," said the Spaniard.

"Today they told me I have the record for the most amount of points in F1 history, so it's a happy day," added Alonso, referring to the record formerly held by Michael Schumacher.

If it was possible to rub some sheen off Vettel's winning streak, it was suggestions Red Bull deliberately disadvantaged pole sitter Mark Webber by putting him on a different three-stop strategy in Japan.

Mercedes driver Rosberg came up behind Perez's McLaren in a battle for eighth late on.

As Rosberg completed a pass, contact between them left Perez with a puncture, dropping him to 15th while the German came home eighth.

Rosberg was adamant Perez brought the incident upon himself with unfair defensive driving.

"Perez was not right with what he did. Definitely dangerous," said Rosberg.

"The rules are clear: if you brake and you close the door then you have to move out again. I was there and he didn't leave space.

"So it was good he punctured his tire, which got him out of the way."

Perez preferred not to apportion blame for the clash.

"It was a tough afternoon," he said. "Everything that could go wrong did. The pitlane, puncture, Nico…"

Rosberg was fighting back having earlier picked up a drive-through penalty for another incident with Perez, in that case for an unsafe release into the McLaren's path at the first pitstops.

The German had no qualms about that punishment.

"It was well deserved and I knew it was coming, too," Rosberg said.

"It was a dangerous release and it was a pity that it happened." Yahoo Eurosport UK

The McLaren driver, who rectified the situation during the second pit-stop phase, ultimately recovered to claim the final point on offer, but feels more could have been possible if he had refrained from making a last-minute alteration to his car.

"The first two stints were pretty difficult as I had massive understeer," explained Button. "That was my fault: on the lap-to-grid, it felt like I had too much front-end, so I took some wing out of the car. It was the wrong thing to do – it left me with too much understeer, and I kept locking up the fronts, which destroyed the front tires.

"For the third set, we added some front-wing, and the balance came back to me. In the end, the car was really good to drive – especially my final stint on the Option, which was a lot of fun, especially as I chased down and passed a couple of other cars."

Team-mate Sergio Perez finished the Grand Prix one lap down in 15th position.