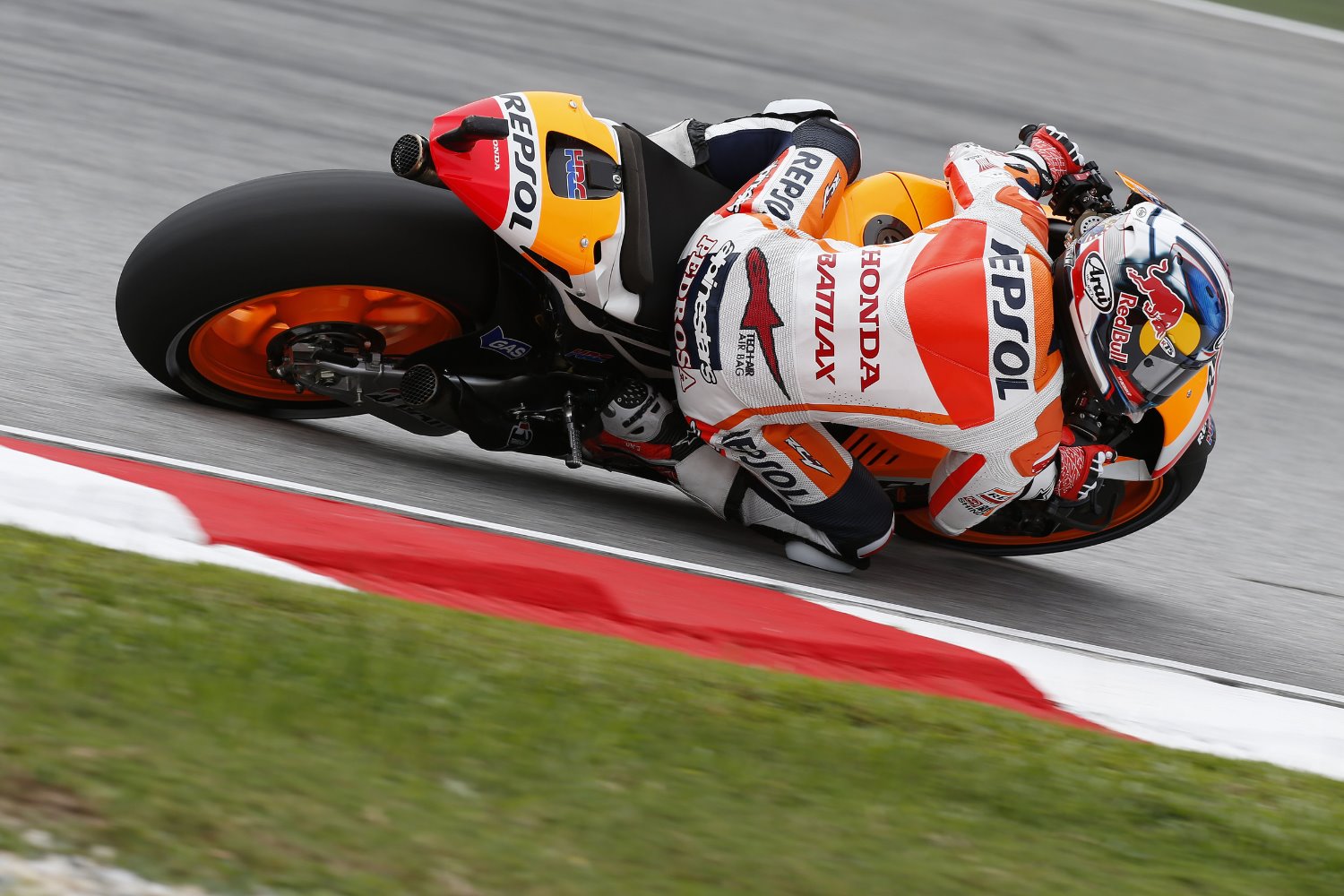 The Malaysian Grand Prix got underway in mixed conditions today, as Repsol Honda's Dani Pedrosa laid down the marker with a blisteringly fast time in this afternoon's FP2 session. Teammate, and Championship leader, Marc Marquez finished the day in second place.

2012 race winner Dani was already fastest in the morning, but in the afternoon he improved his time by 0.675s with a lap time of 2'00.554 (just 0.22 off Lorenzo's record pole time in 2012) on lap 12 of 17. This was all the more impressive considering there was a torrential downpour in-between the sessions, washing away the rubber from the track. Teammate Marc, also second in FP1 this morning, shaved half a second off his morning lap time with 2.01.087 on lap 8 of 17.

Our thoughts are with the family and friends of Marco Simoncelli this weekend, as it marks the second anniversary of the HRC rider's premature passing during the Malaysian Grand Prix in 2011, he will be forever missed.

Defending world champion Jorge Lorenzo had a tougher first day in Sepang. The Mallorcan struggled to find an optimum set up for the Malaysian circuit with mid-corner grip issues affecting his final times. He completed the first day in fifth overall, 0.085 seconds behind his teammate Rossi.

Dani Pedrosa 1st 2'00.554
“Today went well; we had two good practice sessions and were able to ride in dry conditions in both the morning and afternoon. In the second session it looked like the track was going to be wet after a brief rain shower in-between FP1 and FP2, but it dried out quickly and we were able to continue working on our setups. When sitting on the bike I have quite a lot of pain, as the seat is very hard, so we shall see if a few more anti-inflammatories can help to alleviate the issue. We might also add a small cushion underneath my leathers, in order to absorb the bumps that we get when riding"

Marc Marquez 2nd 2'01.087
“We came here before in pre-season, when I had barely ridden a MotoGP bike so it was interesting to compare things again so many laps and miles later! I felt comfortable and this is important when trying to be more consistent every lap. On the single lap we are half a second off Dani who was very fast, as he always is at Sepang, but our pace in general isn't too far off. We have to push hard because if he can do it, that means that the Honda is capable of those times. I was hoping to be more consistent but I had some problems with braking, which we were able to solve in the opening practice session. We still need to improve a few things, but I have realized that we are already fast, straight out of the box"

Valentino Rossi 4th / 2'01.538 / 18 laps
“For me personally, especially this afternoon, it was a good practice because we improved the setting of the bike a lot. We improved with the new tire and with the old tire I can stay with a good pace so I feel better on the bike. For sure we have to improve, but this afternoon I feel good. It seems our competitors are a little faster than us but I will try 100% because in the last races Jorge is always there fighting at the front. It will be hard but we have to concentrate on the bike. We are not very far but we have a small gap to recover."

Jorge Lorenzo 5th / 2'01.623 / 14 laps
“We are investigating what happened today because I didn't have confidence in the middle of the corners and also with acceleration. I had a lot of spinning and the bike is very aggressive so we have to see what we can change for tomorrow to try to get back a good feeling with the bike again."