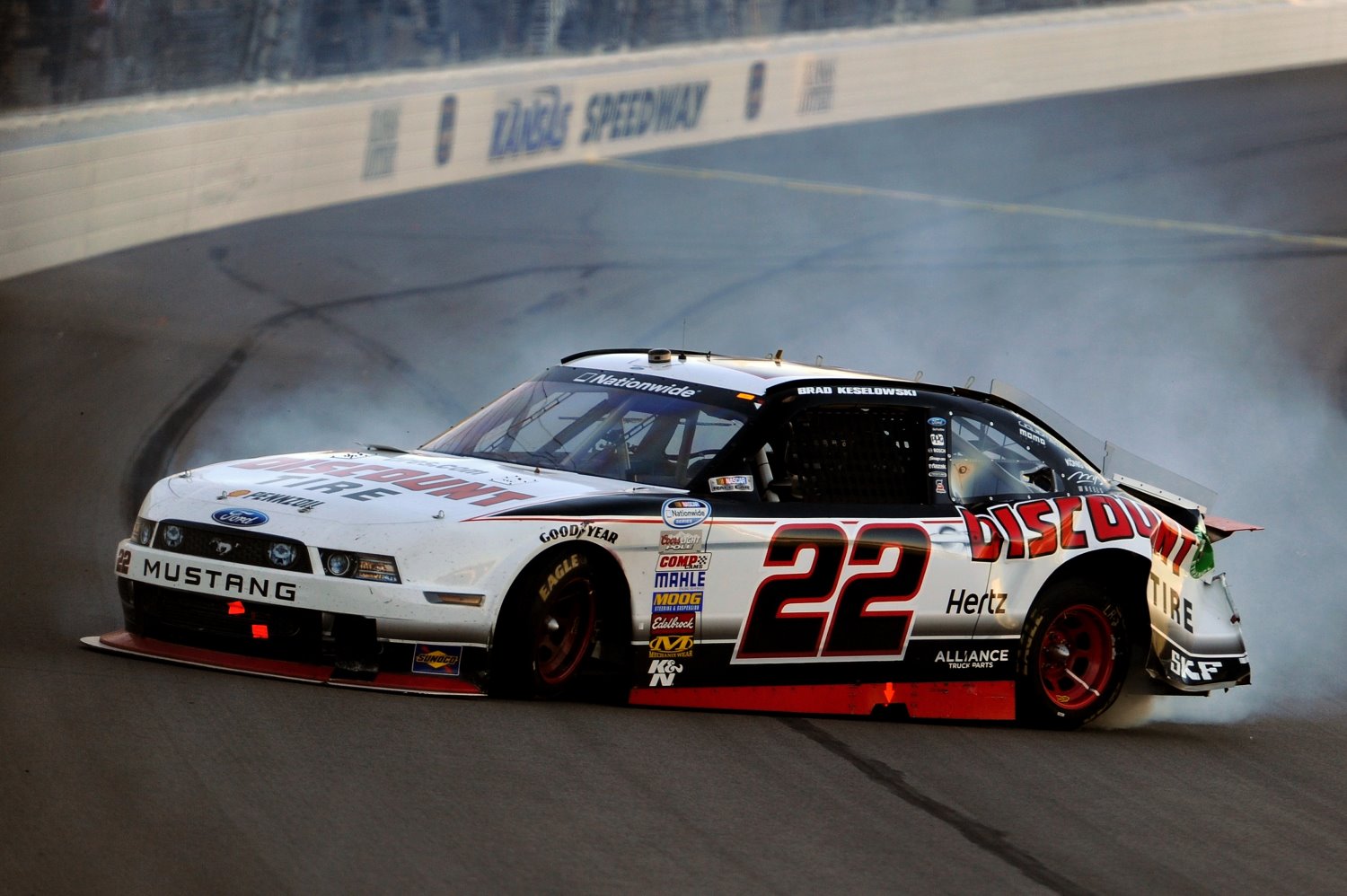 Brad Keselowski vowed to retaliate against rival Kyle Busch over a wreck with 13 laps remaining in the Nationwide Series race Saturday at Kansas Speedway. Whether that means on the Sprint Cup side, where Busch is competing for a Cup title, remains to be seen.

Busch took blame for the accident Saturday, which occurred as they battled for second on the frontstretch.

"Brad Keselowski knows what dirty drivers are because he's done it plenty of times," Busch said. "But I have yet to wreck a person on purpose."

When asked if this will carry over into the future, Keselowski said "(Expletive) yeah."

Keselowski and Busch have had a long feud, including incidents at Bristol and Watkins Glen. On an oil-slicked track, Keselowski ran into the back of Busch on the final lap as they battled for the win at The Glen a year ago. That wreck was one of the reasons Busch missed the Chase.

This year at The Glen, they raced clean and Busch won, but any good feelings between Joe Gibbs Racing's Busch and Penske Racing's Keselowski are now probably bygones.

"He's got a lot more to lose than I do," said the defending Cup champion Keselowski, who has missed the Chase this year. "I guess that's the only good thing of not being in the Chase. … We've had a solid year of racing each other and now we got war. He started it and he can have fun with the results."

Busch said he could have retaliated last year against Keselowski at Texas Motor Speedway, the eighth race of the 10-race Chase where Keselowski eventually triumphed over Jimmie Johnson.

This year, the roles would be reversed as Busch is in the Chase and just 12 points behind series points leader Matt Kenseth.

'That just goes to show you the kind of person Brad Keselowski is and the class he doesn't have," Busch said on Keselowski indicating he could retaliate on the Cup side. "I got wrecked for the Chase spot at Watkins Glen (last year) by Brad Keselowski and then had an opportunity to wreck him a few times throughout the Chase and didn't, let him and Jimmie battle it out on their own and ultimately they won the deal.

"If I wanted to, I could have cost Brad Keselowski a championship but I'm a bigger person than that."

Keselowski said Busch has not raced cleanly in the Camping World Truck Series, where both drivers also are team owners.

"I've raced him really cool over the last year to be respectful to him and trying to repair our relationship," Keselowski said. "I've watched him wreck our trucks, cost them from winning races.

"He put me in the fence at Chicago in the truck race and in the Nationwide races he's been pulling this crap. It's not going to last, I'm going to tell you that."

Busch said it was his fault Saturday, but it was an accident.

"I just got too tight up off the corner underneath the 22 (of Keselowski) there and got too close to him, got inside of his wake and I couldn't get the car to turn so I ultimately got into him and spun him out," Busch said.

There likely won't be any phone conversations between the two rivals.

"I don't have Brad Keselowski's phone number," Busch said. "I don't need it. I don't want it. He didn't call me after Watkins Glen."

Keselowski said he will have some regret when he wrecks Busch.

"I feel bad for the guys (on his crew) that are going to have to fix his (expletive)," Keselowski said. "That's going to be part of racing and they're going to have to deal with it." Sporting news http://www.sportingnews.com/nascar/story/2013-10-05/brad-keselowski-kyle-busch-feud-wreck-exchange-comments-nationwide-series-nascar-crash-sprint-cup-chase