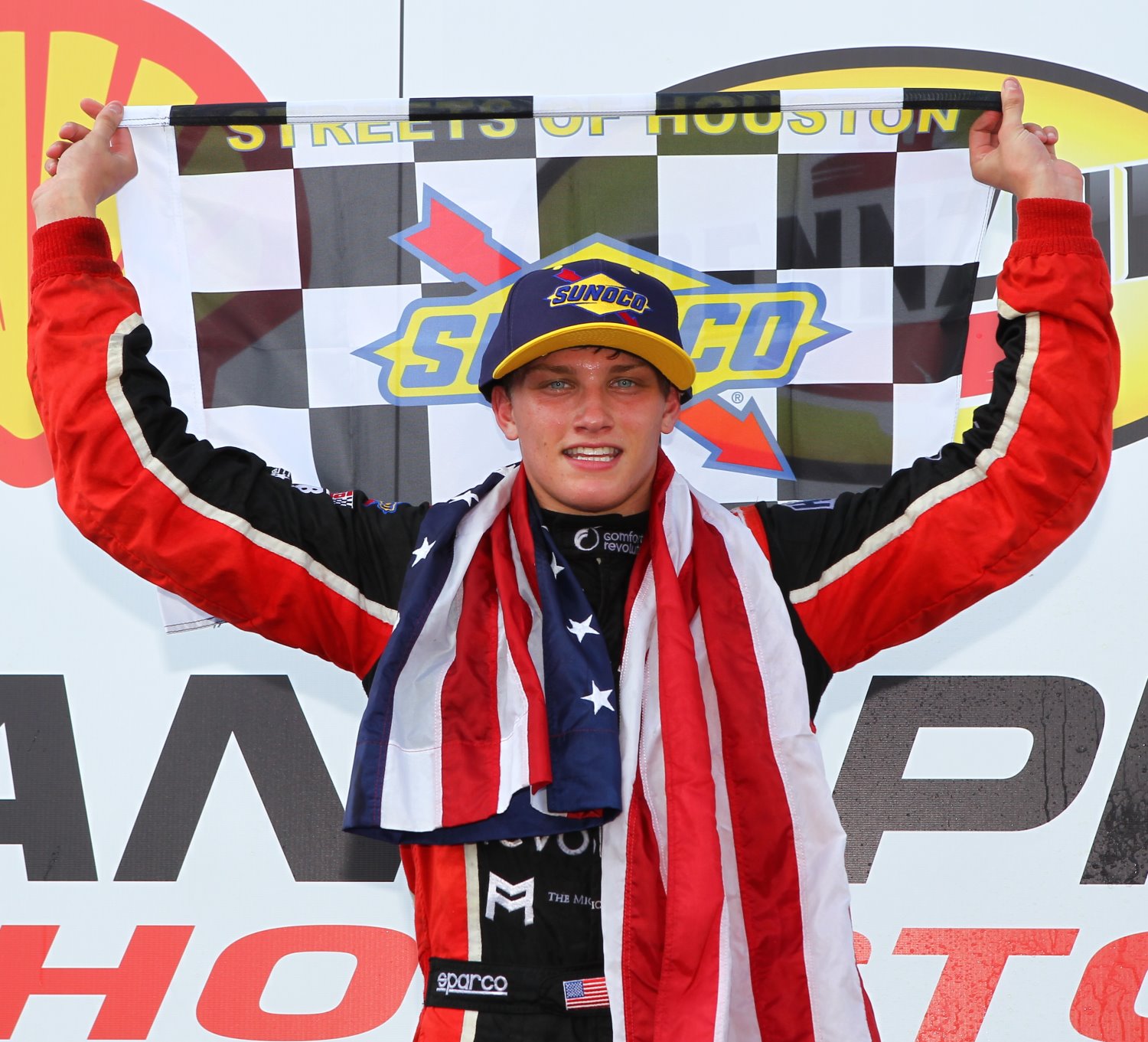 No one is talking about 18-year old Sage Karam and what might happen if he wins the Indy Lights title. Everyone was assuming that Andretti Autosport driver Carlos Munoz was going to win the title, but going into today's race in Houston Karam held a 2-point lead. But Karam led all the way while Munoz made contact and finished last.

As a result Karam now has 425 points and Gabby Chaves is now 2nd with 409 points. Munoz has dropped to fourth with 389 points with one race to go in Fontana meaning the champion could very well be Karam and the prize money that goes with it if he decides to move up to IndyCar.

Conor Daly finished third. Given his success in Europe, Karam's win takes on added significance. It was his third win of the season for Karam.

SAGE KARAM (No. 8 Schmidt Peterson c/w Curb-Agajanian, winner): “I can’t be happy enough with the team, Schmidt Peterson Motorsports. They give an awesome car to me every week. To get this opportunity to go for the championship, I’m so thrilled about it, this being my first year in the series." (About racing teammate Gabby Chaves for the championship): “I know a couple of the guys that had been running up front for the championship had some bad luck today. I just have to focus on what I was doing, stay consistent, like I said, and bring the thing home. We brought it home and got maximum points going into Fontana. It’s good to know that I’m racing my teammate now for the championship because I’ve got all his data, and I can see everything he’s doing. I’ve got the same car as him. Let’s just let the best man win."

GABBY CHAVES (No. 7 Schmidt Peterson Motorsports c/w Curb-Agajanian, second): “We were definitely way quicker than Sage (Karam). Even running in the dirty air, we could catch up to him and stay with him. It was just a bit of an unlucky thing that we had to start on the grid based on championship points and not with who’s the fastest driver out there. We take it as it is, and we’ll keep pushing for the next weekend at Fontana." (About battling his teammate for the Firestone Indy Lights championship): “Hats off to the whole SPM crew. They always put out the best cars that they can, and more than often, they are the best cars on the grid. Congrats to them. It’s great that we’re two teammates fighting for the title. Today could have been different had we qualified, but it is what it is. We’ll keep pushing to take the fight to him at Fontana."

CONOR DALY (No. 22 TMR-RUS Industrial-ALS Association, third): “I just had to be patient, really. I’m still learning the track and the car. When I went by (Jorge) Goncalvez, I finally figured out that I can trust this thing a little bit more on the brakes. But when I got around him, there was a mile-and-half gap. I have to thank Team Moore and all of our sponsors – RUS Industrial and the ALS Association. We got screwed by not qualifying. Me and Peter (Dempsey) both proved we were fast. It’s unfortunate that we didn’t get to qualify."

Results Saturday of the Grand Prix of Houston Firestone Indy Lights event on the 1.634 mile Reliant Park Stadium Circuit, with order of finish, starting position in parentheses, driver, laps completed and reason out (if any):