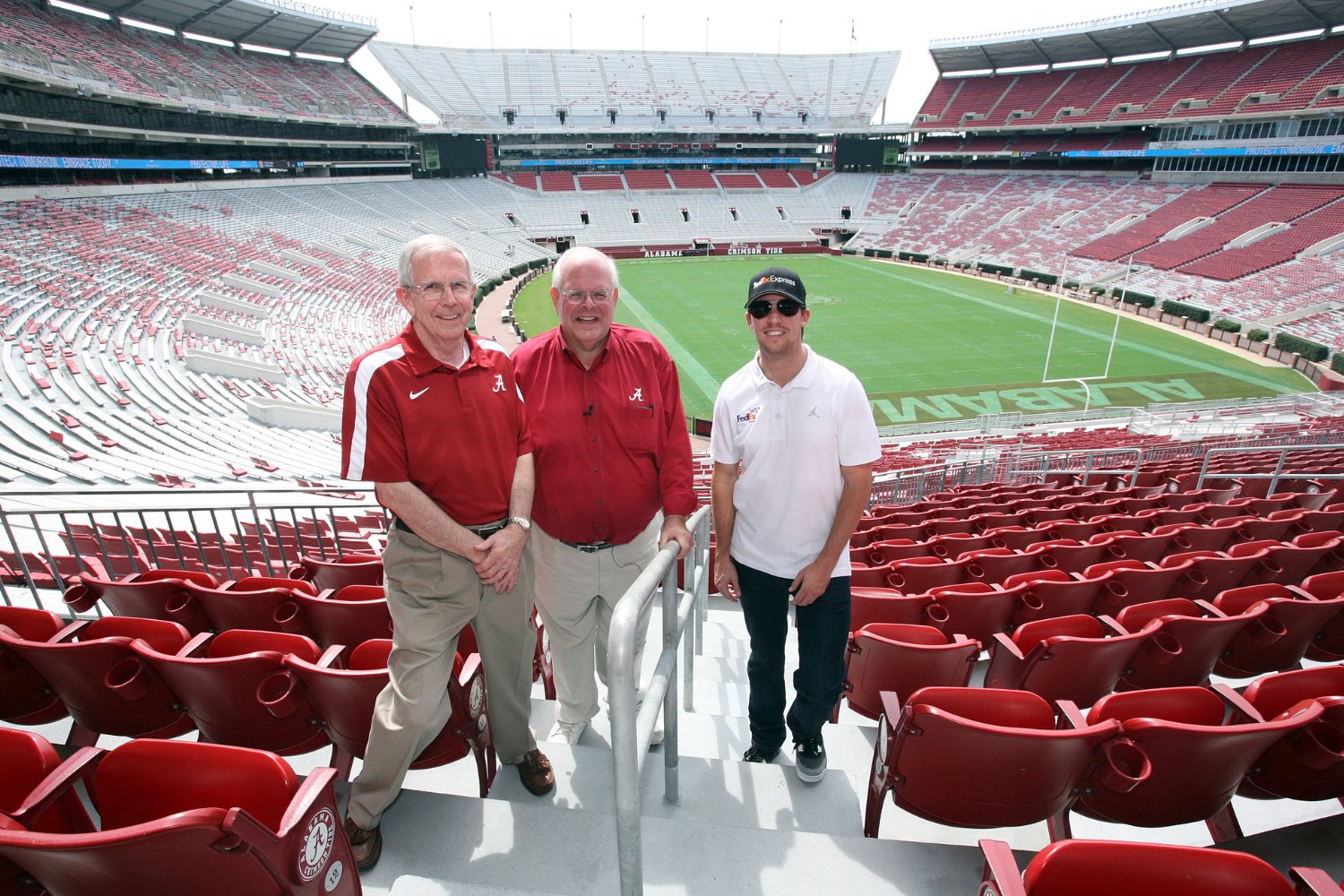 Talladega Superspeedway was on campus today at both the University of Alabama and Auburn University with NASCAR Sprint Cup driver Denny Hamlin and NASCAR Camping World Truck Series driver Darrell Wallace Jr. to launch a NASCAR College Program that seeks to promote the sport and its events among young people. During the day’s events at both campuses students were treated to games, prizes and even rides to class, with the first 100 participants receiving free tickets and infield admission to the Oct. 20 Camping World RV Sales 500 NASCAR Sprint Cup Series race at Talladega Superspeedway.

Fun was the name of the game for the day as tailgate-like areas were set up near Alabama’s campus at The Locker Room clothing store in Tuscaloosa, where 22-time Sprint Cup race winner Hamlin hung out; and at the Auburn University Student Center in Auburn, where Mobile, AL native and graduate of NASCAR’s Diversity Program Wallace Jr. was stationed. Both areas were outfitted with your typical game-day activities like corn hole and “Coke" pong, and students were handed out koozies, posters, pizza and college t-shirts.

After the first 100 students received their “party passes" for the upcoming Talladega race they were given the opportunity to pose Victory Lane-style holding trophies with the drivers. Later in the day both drivers showed off their skills by giving students rides to class in golf carts stickered up like stock cars.

“It was great being on campus and hanging out with the students here at Auburn today," said Darrell Wallace Jr. “I met a lot of great people and I can’t wait to see them again in a few weeks at Talladega Superspeedway. It was a whole lot of fun being here as a part of NASCAR’s College Program and getting to do something I love–driving!"

The passes the students received today, which are available to any college student through Talladega’s $19 College Ticket Offer, give them access to the College Infield Hospitality Tailgate Area at the track for Saturday and Sunday (Oct. 19-20), with free food and drinks provided on Sunday. The tailgate area is brand new for the Camping World RV Sales 500 weekend and should show college students that Talladega throws the biggest party in NASCAR. All info on Talladega’s college program can be found at www.talladegasuperspeedway.com/college.

To make it even easier for students to make it out to ‘Dega, Talladega Superspeedway announced it would be sending charter buses to Alabama and Auburn’s campuses on the Sunday of the Camping World RV Sales 500 to pick up and drop off any students wanting to experience Talladega’s infamous infield during one of the biggest races of the NASCAR season.

The Camping World RV Sales 500 is the sixth race is the NASCAR Chase for the sprint Cup Championship. The unpredictability of races on the high banks of Talladega gives the track the distinction of the “Wild Card" race in the ten race Chase. Matt Kenseth, who’s racked up two wins already in the Chase and seven wins on the season, is the defending champion of the Camping World RV Sales 500, and eyes will be on him to see if he can repeat last year’s success.

The most competitive racing in NASCAR combined with a mix of southern hospitality returns to Talladega Superspeedway October 18-20, 2013 for the Camping World RV Sales 500 Weekend, which also features the fred’s 250 Powered by Coca-Cola NASCAR Camping World Truck Series race. For tickets and information visit www.talladegasuperspeedway.com or call 1-877-Go2-DEGA. This is more than a race…This is Talladega!