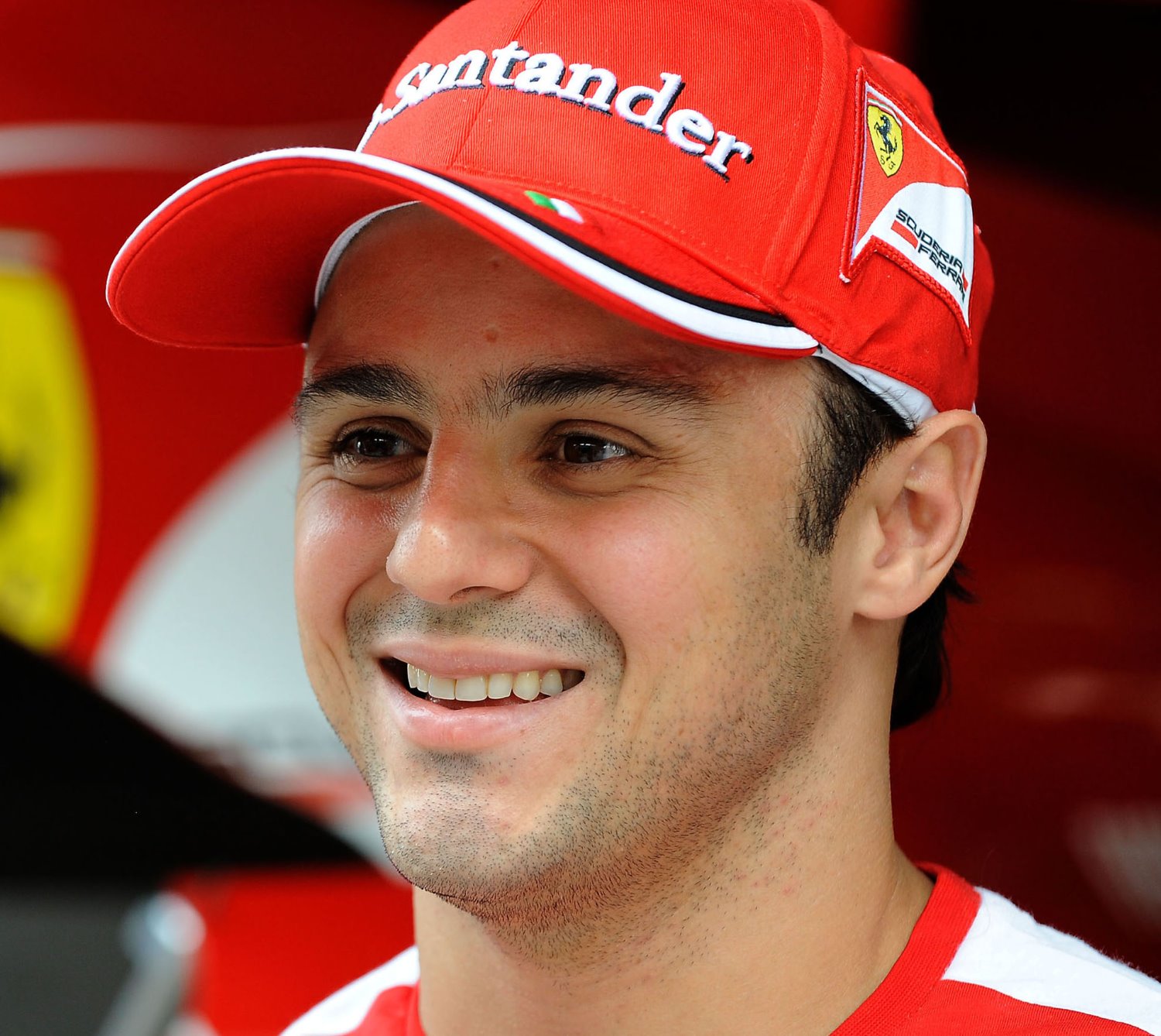 Ferrari 'knows Massa's potential' – Domenicali
(GMM) Monza has traditionally been a venue at which Ferrari likes to announce its full driver lineup for the following season.

But it seems that, amid F1's 'silliest' silly-season for years, the famous Italian team is not ready yet.

"I am laughing and thinking about the poor people who are reading these kinds of things," he told F1's official website.

"If they really knew the truth they would never read such absurd things again."

The real question, then, is about the seat currently occupied by Felipe Massa.

Ferrari is not hiding the fact it is considering its options.

"I know it's hard for people to believe," he told Brazil's O Estado de S.Paulo newspaper, "but we haven't really stopped yet to think about it.

"Do you know why?" he asked correspondent Livio Oricchio rhetorically. "Because we have no hurry."

Indeed, even though Alonso is widely regarded as the clear and beloved number 1, a Ferrari seat is always coveted.

Even by a former team champion who was ousted at the end of 2009? "The driver issue is not yet on the agenda," Domenicali insisted to Oricchio.

"Kimi (Raikkonen) is a great person, but his is one more name among many."

And he insisted that Brazilian Massa is still in the running.

"Absolutely. I like him a lot, and we already know what he can give to us.

"Okay, he is not always giving us what we want, but we know what his potential is."

For now, Ferrari is keeping its eye on the task at hand, even though the realism of continuing to push for the 2013 title will be reassessed after the next two races.

"We have updates coming out of the tunnel for Monza and for Singapore," chassis boss Pat Fry is quoted by Spain's El Confidencial.

"We will continue pushing and see after that where we are."

"It's good for me," insisted Fry, "because I'll have more time to concentrate on what really makes the car faster.

"The two of us will share work between us."

Kovalainen not considering Le Mans move yet
(GMM) Heikki Kovalainen insists he has not yet given up on his formula one career.

After losing his Caterham race seat, the Finn's hopes have been raised again with two more Friday practice drives at Spa last weekend, and Monza up next.

But he admitted at Spa that if the team factors driver sponsorship into its race seat deliberations "again, then the return is not in my hands".

"Everyone knows my situation," he told Turun Sanomat newspaper. "I do not come with money and, if I do get a sponsor, then I'll take the money for myself," he grinned.

It is suggested Kovalainen, 31, might instead follow the likes of Sebastien Buemi, Nick Heidfeld, Bruno Senna and Kamui Kobayashi into Le Mans-style sports cars.

Indeed, even Mark Webber is heading straight from F1's world champion team, Red Bull, into a Porsche prototype at the end of 2013.

"I admit that I was a bit surprised," said Kovalainen, when asked about Webber's decision to leave F1 for the FIA's world endurance series.

"At the end of last year I sat next to him on a plane and it sounded like he was full of motivation.

"So it was a bit of a surprise, but I suppose he has considered it carefully."

Kovalainen, however, told Finnish correspondent Heikki Kulta that he is not yet thinking about a similar move.

"It's because I have the feeling that I have more to give in formula one."

Earlier this week, the Spanish sports daily Marca quoted Vettel as saying comparisons between himself and his former mentor Schumacher are "ridiculous".

"I have three titles, which is nothing compared to seven," he said.

"Beating his record is not something that can happen in the next couple of years, so I don't even think about it," the Red Bull driver added.

"I have had some very good years but it could change suddenly."

44-year-old Schumacher, however, has a slightly different view.

The great German said Vettel, 26, is already on course for his fourth title — a feat not achieved by Schumacher until 2001, at the age of 32.

"He has the best package, and championships are usually won by the best," Schumacher told Belgian television Vier.

"Records are there to be beaten," he smiled. "They motivated me when I was racing, and in the end I achieved it.

"Believe me, if Sebastian was able to surpass what I did, I would be happy for him. In a short time he has won three titles, so why couldn't he win seven?" added Schumacher.

German racing legend Hans-Joachim Stuck, however, doubts Vettel will overtake Schumacher as the most successful driver of all time.

"The times and the circumstances are too different," he told Sport1, comparing the respective Schumacher and Vettel eras.

"If one night Schumacher dreamed of having a new front wing, he could have it the next day and test it as well.

"This is not possible under the current regulations."

Stuck also said Vettel's success is highly dependent on the skills of another man — Adrian Newey.

"If, for whatever reason, Newey was not there anymore, I think the team could be in a very different situation," he said.

Raikkonen's first retirement since his return to formula one might be seen as a knockout blow to his championship hopes, as he drops behind Fernando Alonso and Kimi Raikkonen in the chase to beat Sebastian Vettel to the title.

As the F1 paddock was disassembled at Spa late on Sunday, Lotus still had not definitively identified the cause of the brake failure.

But then it was announced that a plastic helmet visor tear-off strip had entered and blocked the brake air duct.

Lotus reacted with its usual humor, posting a survey on its website asking if the team should react by adding more 'iceman coolant' in future.

And on Twitter, the team jokingly pointed the finger at Vettel, posting a photo of the world champion with a visor strip and captioning 'We think we know where the infamous brake-breaking tear-off came from".

Finn Salo, however, is not convinced.

"I just cannot believe the reason the team gave for the failure," he told the Finnish broadcaster MTV3.

"Even the braking duct becomes so hot that, if it had gone in there, it would have melted.

"Lotus also had a brake problem already on Friday, but now all of a sudden it is the (visor) film?"

The former Sauber and Toyota driver said he suspects Lotus simply got its numbers wrong with a latest technical development.

"If the air is being channeled in a different way, it also might not go to cooling the brakes in the same way," said Salo.

At the height of the new Michelin rumors ahead of the Belgian grand prix, the sport's chief executive admitted the French marque "do want to get back in".

"But we have had contracts with Pirelli for some time," he told Germany's Auto Motor und Sport.

Ecclestone was referring not only to Pirelli's 2014 contracts with the organization he leads – Formula One Management (FOM) – but also the vast bulk of the teams.

But what about the crucial final contract, between Pirelli and F1's governing body, the Jean Todt-led FIA?

"They (the FIA) have nothing to do with the commercial side," Ecclestone is now quoted by Brazil's O Estado de S.Paulo newspaper.

"They are the regulators, checking that the rules are being observed," he added.

Ecclestone also played down suggestions the Michelin story is being powered by Frenchman Todt, the FIA president.

"If the issue went to a vote of the World Council," he said, "he (Todt) is entitled to one vote.

"But as it's not a matter subject to the World Council, it doesn't make much difference anyway," added Ecclestone.

Austria's APA news agency also quoted Ecclestone as saying "All the teams that have talked to me about it say they are very happy with Pirelli".

Domenicali expects changes in 2014 pecking order
Ferrari Team Principal Stefano Domenicali has predicted that the upcoming rule changes for the 2014 Formula 1 season could spark a shake-up in the identities of the sport’s front-runners, with all outfits facing a struggle to fully exploit the new regulations.

The last major rule changes, enacted in 2009, saw Brawn GP rise from the ashes of the underperforming Honda team to win both titles, while Red Bull also emerged from the midfield to become championship contenders. With next season’s regulations featuring new 1.6-litre V6 engines and a greater role for energy recovery systems, car design is set to be markedly different, and Domenicali is under no illusions of the dilemmas facing the top teams.

“All the top teams realize that if they want to be a force in 2014, then they have to start very quickly to switch resources, as it is a very complex matter – especially for the big teams," he said. “My guess is that we might see huge surprises next season in terms of the pecking order. In my view – and as far as I remember – the changes that we are facing are the biggest changes we have ever had in Formula One. It is really important to get it right, otherwise you’re lost."

Domenicali also revealed that Ferrari is planning to switch development to its 2014 car during September, depending on the championship picture.

“September is the month where we will basically start to shift, as the 2014 project is very complex. At the end of September we will then basically switch everyone, depending, of course, on how the situation is with the championship."

Bird chasing F1 drive
Sam Bird feels he has shown he deserves a chance in F1 even though he can't bring in the sort of sponsorship some drivers can.

The 26-year-old Brit is currently competing in the GP2 series with Russian time where he has claimed four race wins on his way to fourth in the Championship.

Bird is dreaming of a future in Formula One with the Mercedes reserve driver believing he has proven that he's worth a chance.

"I would like to think now that I have done enough to prove that I am capable," he said in an interview with Sky Sports F1 Online.

"I have won the most races of anyone so far in GP2 – I certainly feel that I am ready and I feel that I have done enough now to prove that if I was put into a race seat I could do a good job for a race team.

"I think it is clear now that in Formula 1, you need to take money – most, if not all people now need to take some form of sponsorship to a team – and I think that my performances so far this year have shown I warrant the chance, but I still need help and that final push to get into Formula 1."

He added: "Maybe I wouldn't need to take as much sponsorship as some people because of my performances, but that is still on-going work to try and secure a seat for next year.

"It is still the dream for me to be a Formula 1 driver and it is just that last little push now that I need to try and secure the seat."