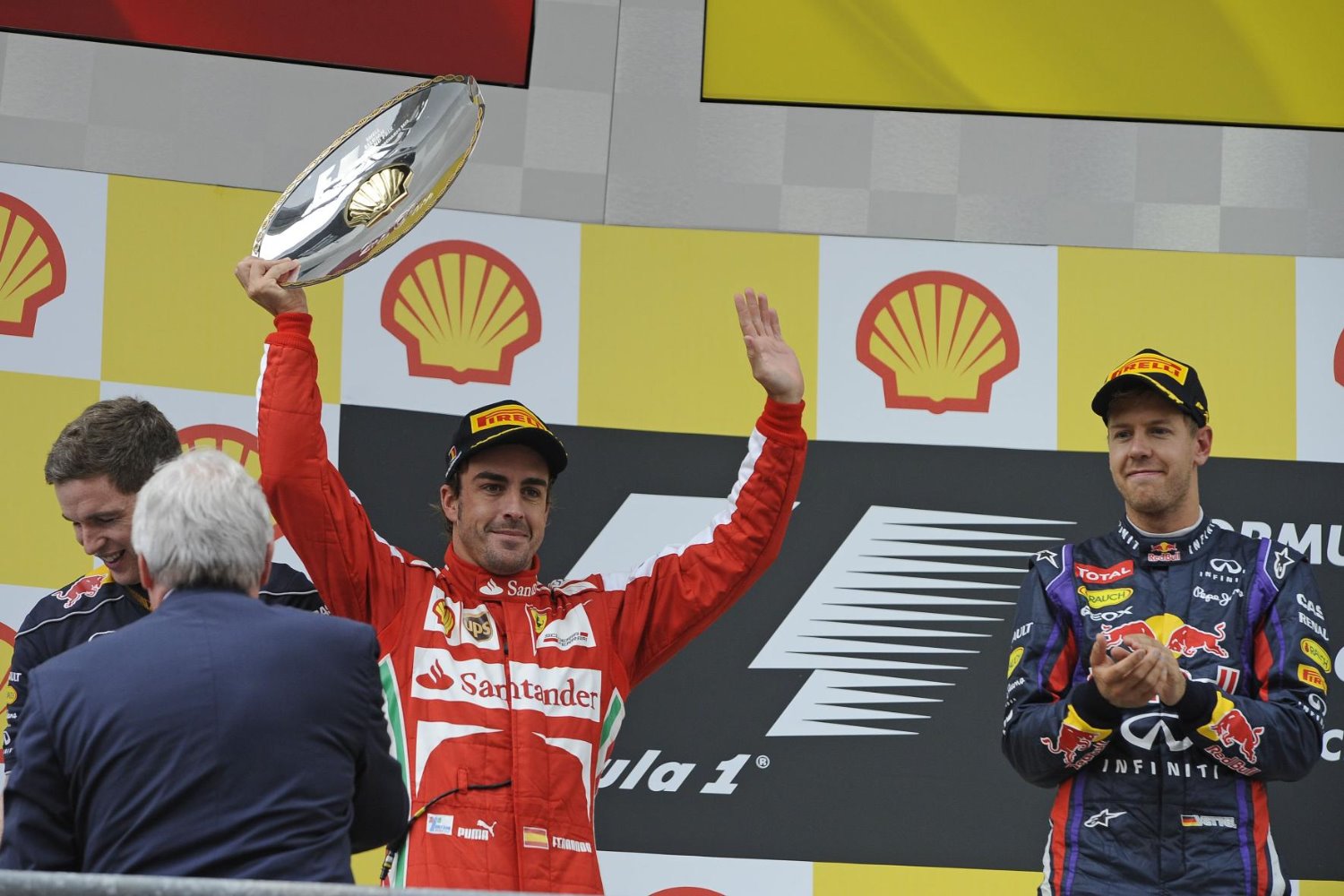 Not since the last day of June had Fernando Alonso been able to wave to the crowd from the podium. That was at Silverstone when he was third in the British Grand Prix and today, he went one better with a fine second place. The ever confident Ferrari man had said he could win this race, even after qualifying only ninth yesterday and given that the winning Vettel-Red Bull combination looked unbeatable Sunday, this was a fantastic result.

Felipe Massa had a more difficult afternoon, but still made up three places by the flag to bring home some more valuable points for seventh place. Scuderia Ferrari is still third in the Constructors’ classification, 17 points behind Mercedes. Alonso has now moved back up to second in the Drivers’ standings, 46 points behind today’s race winner, while Massa remains seventh. Joining Vettel and Alonso on the Belgian podium was third placed Lewis Hamilton in the Mercedes.

It was perfectly dry for the start and it stayed that way to the checkered flag. By the first part of the opening lap, Vettel had passed pole man Hamilton, with Rosberg, Button and Alonso all getting past Webber so the Spanish Ferrari man had already made up four places to lie fifth, while Massa in the other F138 had dropped two spots to twelfth. The majority of the field, including the two Prancing Horse cars, had started on the Medium, softer Pirellis.

On lap 4, Alonso passed Button on the uphill section after Raidillon to take fourth place, behind Rosberg. At the front, Vettel’s Red Bull was 3.5s ahead of Hamilton in the Mercedes, while the Englishman had 1.9 in hand over his team-mate. Alonso was flying and pulled another move, this time on Rosberg on lap 5 to get to the bottom step of the podium positions and at this point, he was 7.4 behind the leader.

Lap 8 saw Massa make up one place to eleventh, when Grosjean ran wide off the track in the Lotus. The Brazilian was one of the first to change tires, coming in for another set of Mediums on lap 9, dropping to seventeenth. Di Resta in the Force India and Vergne in the Toro Rosso pitted on the next lap. Hamilton pitted from second on lap 11, promoting Alonso to second, exactly 7 seconds behind Vettel. Rosberg came in on lap 12 from fifth and like everyone, took on another set of Mediums. Massa was now twelfth having set the fastest race lap at this point. Alonso and Webber changed tires on lap 13.

The race leader came in on lap 14, which dropped him to second place, behind Button’s McLaren which had yet to stop, while Hamilton was third and Alonso fourth, but on the next lap, the Spaniard squeezed inside the Englishman coming out of the La Source hairpin to be back in third, with Button now second behind Vettel who had got his Red Bull back in front, having passed the McLaren at the Bus Stop. Massa had moved up to eighth.

Coming out of the Bus Stop on lap 17, Button dived for pit lane, fitting Hards, possibly looking at a one-stop, which put Alonso second again, still 7 seconds behind Vettel. On lap 22, half-distance, the gap between Vettel and the Spaniard had grown to 8.7, with Alonso leading Hamilton by 4.1. Grosjean was the last driver to change tires on this lap, clearly on a one stop. Massa was up to seventh, but he had the slightly faster Raikkonen on his tail in the Lotus. However, the pressure was soon off Massa, as Raikkonen went off the track at the final corner on lap 25, pitted and retired.

Hamilton came in from third for his second stop, taking on Hards to run to the flag, with Massa and Sutil in the Force India also changing tires at this point, the Ferrari man going to the end from here and now lying ninth. As the yellow flags came out because of a collision between Maldonado and Di Resta, Alonso came in for his final stop on lap 28. He rejoined in third place behind the Red Bull of Webber, who had yet to make a second stop. But the Australian came in next time round, so Alonso was again second, a massive 26.4 seconds behind Vettel who had only pitted once so far. In eighth, Massa set another race fastest lap. On lap 30 the leader made his final visit to pit lane, just as Alonso emulated his team-mate with a fastest lap. Lap 31 saw the gap between Vettel and Alonso sit at 6.8, as the German’s engineer came on the radio to tell him to extend the gap, as there was a threat of rain. Button clearly couldn’t manage a one stop and pitted again on lap 34.

From then on, the order settled down at the front until Alonso took the checkered flag in second place, almost 17 seconds off the leader. However, the action wasn’t over for Massa and with just four laps to go, he managed to get past Grosjean to secure seventh place.

Only two weeks to go until the excitement and emotion of Scuderia Ferrari’s home race at the temple of speed that is Monza. Apart from a hiccough in Saturday’s qualifying, it’s clear the F138 appears to have found some more pace over the summer break and that will be a key factor down the long straights in the Royal Park.