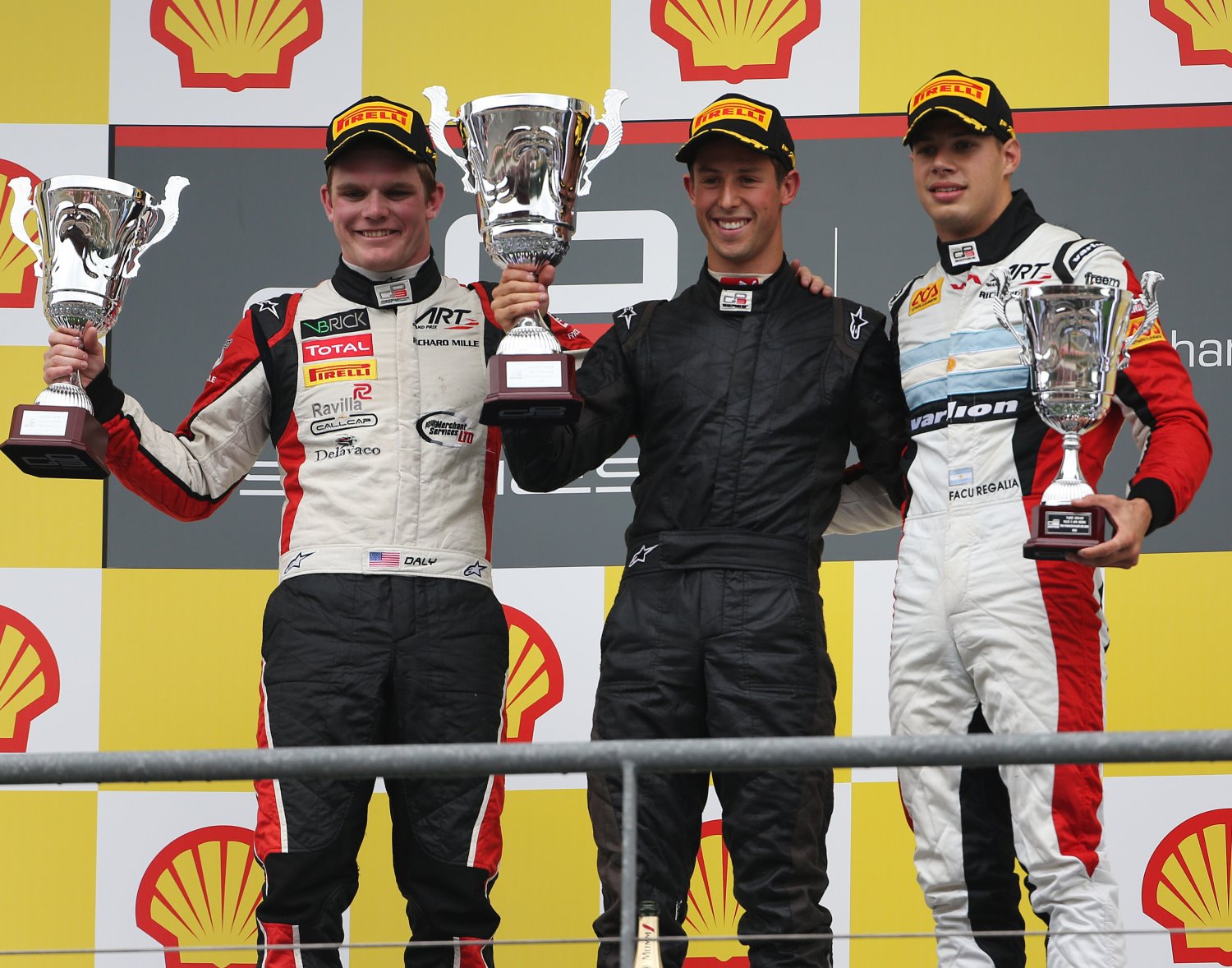 P4 to P1, that’s how it’s done! Carlin’s Alexander Sims made a great start, avoided trouble into Turn 1, claimed the lead of the race and romped away to celebrate his second win of his GP3 career. The Brit also pocketed points for fastest lap making it a very happy return for him to the Series this weekend. The ART Grand Prix duo of Conor Daly and Facu Regalia joined the Brit on the rostrum, with Regalia extending his advantage in the championship.

A damp track greeted the 27 drivers, but it was slick Pirelli tires for the 13 lap race with no rain falling during Race 2. Tio Ellinas (Marussia Manor Racing) started from reverse pole and was keen to get his championship chase back on track but it all went wrong at the start for him. Bamboo Engineering’s Melville McKee made a slow getaway from the front row and attempted a move on the inside of the Cypriot going into La Source. The two made contact, the Brit was able to continue into P2, but the race was over for Ellinas who retired in the pitlane. McKee was given a drive through penalty for causing a collision.

Sims from the second row of the grid avoided the incident at the start and came out of Turn 1 in the lead. The Carlin driver pulled a two second advantage at the end of the first lap, with McKee resisting the best efforts from Daly. Once McKee served his penalty, Daly and Regalia moved into the rostrum positions to further enhance their championship hopes.

Koiranen GP’s Kevin Korjus was on the move and passed Race 1 winner Daniil Kvyat (MW Arden) for P5, but it was Dino Zamparelli (Marussia Manor Racing) who carved his way through the pack. The Brit started in P10 and made good progress. Zamparelli overtook Kvyat to sneak into P6, but the Russian driver wasn’t keen to give up his position and soon reclaimed the place back, the duo glued to each other throughout Race 2.

Meanwhile at the front of the race, Sims continued to edge away, building a huge advantage of nearly six seconds. Robert Visoiu (MW Arden) and Patric Niederhauser (Jenzer Motorsport) also came through the field, collecting the final points on offer and passing Lewis Williamson (Bamboo Engineering) in the latter stages.

There was a small incident on the final lap when Luis Sa Silva (Carlin) and Aaro Vainio (Koiranen GP) came together, both ending their race in the gravel, but it was Sims who crossed the line to take victory by over eight seconds. Daly and Regalia joined Sims on the rostrum, with Nick Yelloly (Carlin), Korjus, Kvyat, Zamparelli and Visoiu completing the points scorers.

Regalia extends his Series lead to 14 points, but now his nearest contender is his ART Grand Prix teammate Conor Daly on 101 points. Ellinas has dropped to third in the Drivers’ Standings on 95, with Korjus and Kvyat on 93 and 88 respectively. ART Grand Prix increase their lead in the Teams’ Standings on 291 points, with MW Arden on 195 and Koiranen GP on 168.

With only two rounds remaining, every point is vital in the fight for the elusive GP3 crown, let’s see what happens at Round 7 in Monza, Italy on 06-08 September 2013.