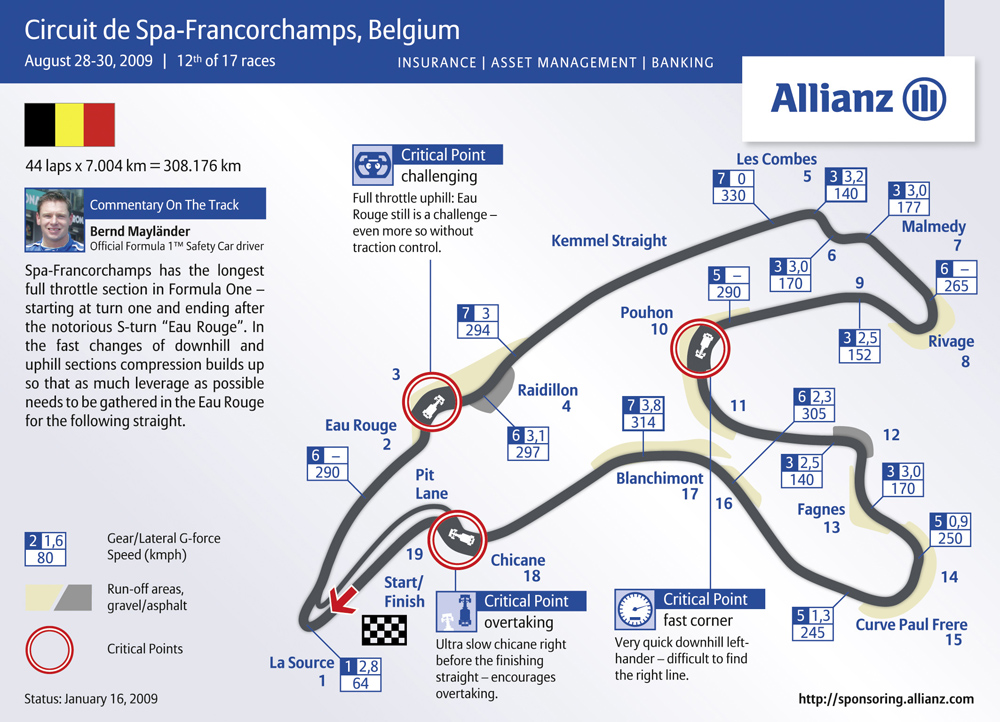 La Source to Eau Rouge
The first corner, the La Source hairpin, is the slowest part of the track: car speeds drop to just 70kph and engine revs to around 8,700rpm. As cars exit the hairpin, the track dips very sharply and continues to fall for several seconds. The compression at the bottom of the descent exerts huge pressure on the engine. The vertical load will be close to +5g, squashing everything downwards into the base of the car – fuel, lubricants, the driver – every part will be positively loaded. At the end of the old pits the track starts to climb very sharply, with a gradient close to 1 in 4, equivalent to one of the steepest climbs in the Tour de France. This is particularly tough for the engine as loads suddenly change. Going over the crest of the hill, they will change even more dramatically, with the vertical force suddenly lifted – imagine how your stomach feels when you come over the top of a dip in a rollercoaster. The parts are suddenly unloaded, with the vertical forces switching to -3g. This can affect fluid flow through the lubricant and fuel systems as they too ‘rise’ within the system and away from their respective pumps – the systems therefore need to be ultra-effective to avoid starvation.

The Kemmel Straight
From the exit of La Source to the braking point for Les Combes engines will be at full throttle and maximum revs – without lifting – for close to 23secs, the longest period of wide open throttle on the calendar. It’s a phenomenally long distance for the engine to be under such stress; more than 20 times the length of a soccer pitch. The demands are exacerbated by the climb – over 80m in altitude from the exit of La Source to Les Combes – meaning atmospheric pressures change. At the higher altitude less air is going into the engine, so less fuel is burned at the top of Les Combes than at the compression after La Source. The difference is typically 1% between these two points.

Blanchimont to Bus Stop Chicane
The second long straight at Spa is from Stavelot through Blanchimont to the Bus Stop chicane, where the RS27 engine will be at wide open throttle for 20secs. Going into the Bus Stop, the driver will be at over 300kph but will need to brake down to 75kph for the entry to the corner. To give the right stability engineers work very hard on the overrun settings, trying to reduce any rear locking whilst not pushing too much at turn-in. In parallel they will try to make the downshifts as smooth as possible so as not to destabilize the rear of the car.

Straight after the summer break we go to the hardest track of them all, Spa-Francorchamps: a circuit that gives us the ‘most’ of everything. It’s the longest, potentially the most changeable weather conditions, but from an engineer’s perspective it’s the most enjoyable as it’s so much of a challenge.

A massive 70% of the 7km track is spent flat out, equating to almost 5.5km, or the length of a standard F1 circuit. Over one lap the engine will have a total wide open throttle time of over 75secs, making it an incredible test for engines. Outright power and top speed are therefore crucial and any gains will be twice as effective in reducing lap time compared to a less power sensitive track such as Monaco. As a result, almost all our partners will use fresh engines for this race to give as much power advantage as possible.

Even though Monza sees the RS27 at full throttle for a longer time, it is the combination of this wide open throttle with the compressions and steep gradients that gives such an awesome workout. Having the right balance between reliability and top end power is always a juggling act so, for these reasons it’s one of the circuits we use as a control circuit. In fact the Energy F1-2014 Power Unit is being put through its paces at Spa as we speak.

Getting the mapping right, while also allowing enough flexibility to deal with the changeable weather is a further challenge. With the track being so long it’s not unusual for it to be raining in one area but dry in another so we try to give as much flexibility as possible without compromising that top end power and acceleration.

With the amount of work that goes in, more than double than any other circuit, winning at this track is just as rewarding as Monza – the ultimate test for an engine manufacturer.