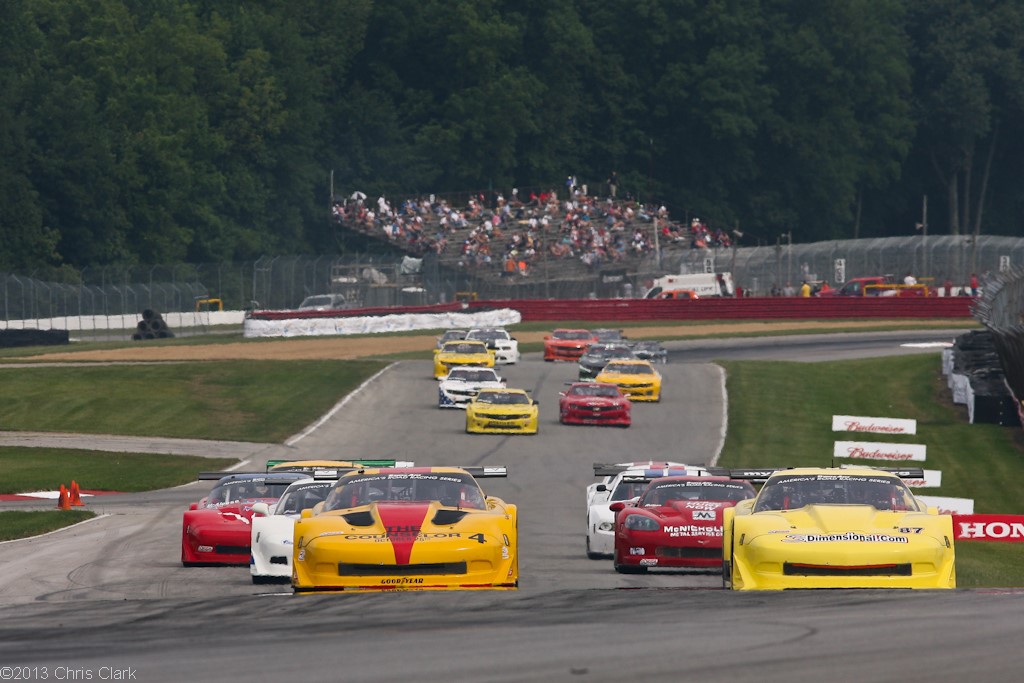 At the 3Dimensional.com Trans Am Race at Mid-Ohio Sports Car Course, in a race full of what seemed to be just about everything, Cliff Ebben was rewarded with his first Trans Am victory of the 2013 season, the result of a strong technical performance. Meanwhile in TA2, Trans Am rookie Adam Andretti put forth a performance worthy of his storied family name—making up 15 positions.

The race got off to a rough start, going under yellow immediately, after two TA cars, the #14 of Joe Strum and #99 of James Winslow made contact on the backside of the track. With Winslow stopped near the middle of the track, officials had to put the race under double yellow for the sake of safety.

Shortly after the race went back underneath a green flag, Drissi had two wheels go off course, causing him to fall back several positions. Peterson was quick to capitalize, and pushed into the lead, followed closely by Ebben, in the #36 Stumpf Ford/McMahon Group Ford Mustang—who had moved up three spots to second position.

Meanwhile Andretti had moved up to the top 3 for TA2, passing most of the field and the #11 Ctek/Motorstate/NorthStar Battery Chevrolet Camaro of Cameron Lawrence in his move to third place.

Andretti would pursue Robert Huffmaster, driver of the #27 KRYDERACING/VirSec/Chevrolet Camaro, eventually overcoming him and applying pressure to pole setter Bob Stretch. Stretch, in the #98 Wheel America/Fix Rim Mobile Chevrolet Camaro, was able to hold off Andretti until the 23rd lap of the race when he was overtaken by the #44.

Andretti was able to hold that lead through two more double yellows and multiple challenges from the #11 of Lawrence. Lawrence had taken advantage of the misfortune of Stretch, who was forced to make a pit stop, but was able to still finish on the lead lap—an accomplishment on its own.

The TA class was not without excitement of its own—when racing had resumed after the second full course yellow, Simon Gregg had moved into first place, a move which was later ruled to have been made under double yellow—however, it was a position he would retain until the end of the race. While Gregg was still holding first position, the five places behind him were in a state of constant flux with Drissi, Peterson, Ebben and Amy Ruman, Ohio-native and driver of the #23 McNichols Company/ 1800HurtNow Chevrolet Corvette, constantly swapping places.

The move of the race came on the 36th lap when Ebben made an audacious pass on the inside going into turn one, going by both Ebben and Ruman and moving into second place overall, behind Gregg. A position that, due to Gregg’s eventual penalty, would earn him first place in the race.

“I’m really not all that fast," Ebben said. “It’s more of just staying on the track and not making a lot of mistakes. You play follow the leader until you get a chance, if you get a chance, that’s about it. On turn one, I figured that I had enough of a jump— was there and it was too late for them to cut me off and it paid off.

Ebben was happy with the victory but insisted he would have been pleased with the result either way.

“It’s really nice, don’t get me wrong," Ebben continued. “I was going to be happy either way because it was fun and I had a great time, but, honestly, first feels a whole lot better."

Following Ebben would be Doug Peterson in second and Simon Gregg in third. Gregg was penalized a total of two positions for his passing of two cars under yellow, giving first and second to Ebben and Peterson, respectively.

Adam Andretti and the #44 car would hold off numerous challenges from Lawrence until the end of the race, as the checkered flag flew despite the race ending before reaching Trans Am’s 100 mile mark. As the Series was under time constraints, the race concluded after 40 laps of the 2.258 mile course.

Andretti was pleased with his performance and his first ever Trans Am victory in what was only his second Trans Am start.

“This has all been incredible," Andretti said. “The Series is steeped in history, my family is too, and having it come together is a dream come true. I’m at a loss for words, which is rare for me. “

“I’m just so proud to be representing ECC motorsports and Anchor Bolt and Screw company—they gave me a great car. The Henriksen family has been one of the best blessings in my life, and I can’t thank them enough."

“As far as the Trans Am Series, the competitors are what make this such a special series," Andretti continued. “They’re a lot of fun, they laugh and joke and share information back and forth to make everyone better. And when you’re racing everyone’s looking for the advantage; but no one is out there to kill anyone’s race—and that’s what’s best. You race clean, you race hard, and that’s all you can ask for. I consider myself lucky to be in this series."

“These cars are an absolute blast to drive; they’re pure bred race cars. The Hoosier tire works really well, our Howe chassis is second to none. It’s a testament when you’re going side-by-side with someone down the straight and you can’t get an advantage. And that makes those wins much more rewarding. And this track at Mid-Ohio, you have to optimize every little bit of this place. It’s one of the most competitive tracks in the mid-west and that’s why—just because of its technicality."

TA3, American Muscle, featured a strong battle between two Trans Am newcomers, Todd Napieralski, driver of the TPR/SKF/TREMEC/Backstreet Performance Chevrolet Camaro, and Dane Moxlow, in the #20 Trenton Forging/Cardinel Energy Ford Mustang. It was a race that harkened back to Trans Am races from years past, a production Mustang versus a production Camaro, side-by-side, through turn after turn. Unfortunately for Moxlow, that fight was cut short as a foray off course sent him back several places, leaving Napieralski a comfortable buffer en route to victory.

“Dane had a quick qualifier," Napieralski said. “I wasn’t quite sure how everything would go, we’ve never done a race this long before so, either way it would be an experience. I went in for pass after a restart and he made room, but unfortunately we both had cold tires and he went off into the marbles. Either way it was a great experience, and it’s always great to walk away with a win."

David Seuss, in the #9 Northern Light Porsche 996 GT3, overcame Tim Gray, in the #60 Ryan Companies US Inc Porsche GT-3 Cup 997, for the win. Seuss was able to run up front throughout most of the race, starting in front of Gray and fending off multiple approaches from the driver.

“Having a Mustang, Porsche and Camaro racing side-by-side going through a corner is amazing," Seuss said. “If you don’t get excited about that, you’re not a race fan—that’s what’s so great about this class and series, it’s so relevant in the world of racing."

Trans Am will now head north to Brainerd International Raceway for Round Seven of the 2013 Trans Am Series on September 1, 2013. TA2 results are still provisional.