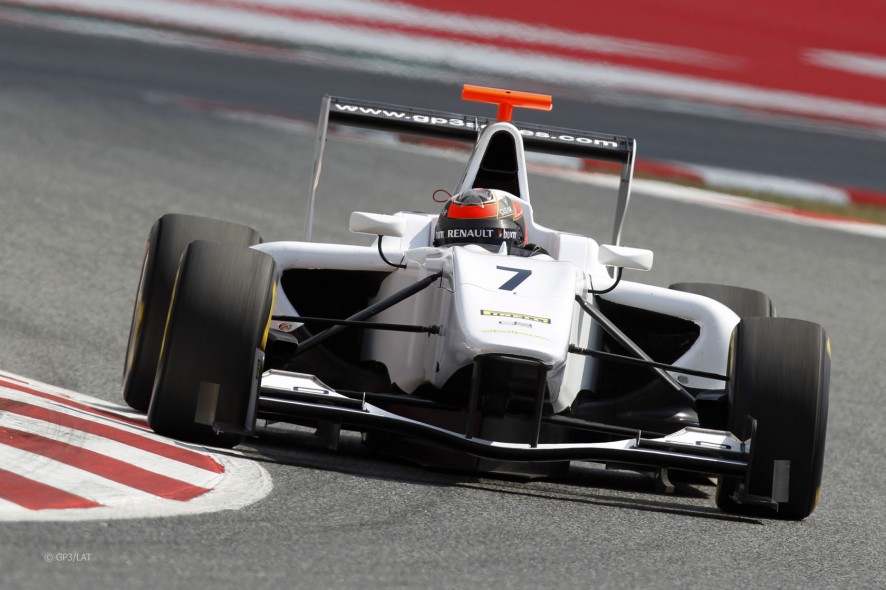 He told the series' official website that the car was "actually fun to drive".

But to Finland's Turun Sanomat newspaper, he joked: "It was good, but they should think about putting an engine in the car."

Teams should stay out of 2014 F1 tire question – Lauda
(GMM) F1 teams should accept the chosen specification of next year's Pirelli tires.

That is the claim of Niki Lauda, who was speaking to Germany's Auto Motor und Sport amid reports the 2014 tires might be slightly bigger and wider next year to suit the higher torque of the new V6 engines.

It had emerged that while Renault and Ferrari want the 2014 specification to remain the same as in 2013, F1's other engine supplier Mercedes – rumored to have a power advantage next year – wants the bigger tires.

The very latest reports suggest that the FIA has actually decided to keep next year's tire specification largely the same as in 2013.

But Lauda had added: "Charlie Whiting wrote to all the teams that Pirelli wants a larger diameter and wider tires.

"The way I understand it, it is now decided by the FIA alone."

He said the teams and suppliers' only role should be to give Pirelli all the data the official tire supplier requests.

"If not, we should not be surprised if we stand in Melbourne next year complaining again about the tires.

"Pirelli should determine what next year's tires look like without the influence of the teams. With the new cars and engines, it is important that we have stable tires."

Red Bull 'not nervous' despite not signing Raikkonen
(GMM) Dr Helmut Marko has hinted that Kimi Raikkonen is not in Red Bull's plans for 2014.

The Austrian's comments come amid reports the 2007 world champion has actually decided to move from Lotus to Ferrari next year.

After German media reports said Daniel Ricciardo will be Sebastian Vettel's new teammate, Red Bull's Marko admitted that the team's 2014 lineup will be announced this weekend in Belgium.

But he has hinted that Finn Raikkonen is now out of the running.

Asked about the Raikkonen-to-Ferrari reports, Marko told German newspaper Bild: "I'm not nervous. Don't forget that we still have Vettel."

It is a clear sign that Red Bull has decided instead to sign Toro Rosso driver Ricciardo, who was described by Bild as a 'no-name' driver.

But Marko insisted: "This (Ricciardo's signing) is not fixed yet."

Rosberg happier with Hamilton as teammate – Brawn
(GMM) Nico Rosberg is very happy to be tested alongside the undoubted talents of Lewis Hamilton at Mercedes, team boss Ross Brawn insists.

Paired with the great seven time world champion Michael Schumacher between 2010 and 2012, German Rosberg emerged as the most consistently strong.

But team boss Brawn admitted that Rosberg is arguably happier now, alongside Hamilton — widely regarded as among the very best on the grid.

"Lewis is a great reference for the team," Brawn is quoted by Brazil's Totalrace.

"I think sometimes he (Rosberg) was a little unhappy with Michael, because it wasn't the same reference. Michael often had difficult moments with Nico.

"Was it because Michael was not as good as he once was? Or was Nico better than some people gave him credit?

"I think everyone recognizes now that Nico was better than everyone thought," he added.

Brawn said the results of the 2013 season, with Rosberg winning twice and Hamilton opening his victory account recently in Hungary, has proved the current driver pairing is right.

"I feel vindicated now that Lewis is on the team, because people are saying how good Nico is, and I've always said so," he insisted.

Regarding the current lineup, the team announced at last season's Brazil finale that Charles Pic would be driving a green car in 2013.

And Giedo van der Garde was only unveiled as Frenchman Pic's teammate in February this year — mere weeks before the championship began.

When asked about the 2014 lineup, boss Cyril Abiteboul told Brazil's Totalrace: "We would like to decide earlier than we did this year.

"In a way, that it took so long (for 2013) did hurt us. And next year the understanding between team and driver will be so important with the new power unit.

"So we want to make sure we make the decision as early as possible so that we can learn everything that can be learned before the first test.

"We would like it to be set in September or October," Abiteboul added.

Rookie Dutchman van der Garde's place at Caterham is considered in doubt due to his performance in 2013 so far.

He told Telegraaf newspaper: "Important progression for any rookie is difficult at first, and now I've experienced it first-hand this season.

"But I'm sure that the trend for the last races will be upwards.

"It is still too early to talk about next year and all the rumors," van der Garde insisted.

Sauber still yet to pay impatient Ferrari – report
(GMM) Reports that Sauber's Russian rescue deal is on the brink of collapse are persisting.

Last week, despite F1's August slumber, the Swiss team was forced to reject reports the millions in crucial backing might never materialize.

"We are astounded at the heedlessness with which some media are prepared to spread false reports and rumors," said the team in an official statement.

In the same statement, the Hinwil based team said a contract with teenage Russian driver Sergey Sirotkin, whose father is a key figure in the entire deal, "is in place".

But the German newspaper Welt am Sonntag reported on Sunday that it has "documents that prove the opposite".

Indeed, Sirotkin's father Oleg has told Izvestia, a Russian daily, that he will only travel to Switzerland this week to sign the deal.

"I guess it is not so different from other, similar (pay-driver) contracts, which are usually (EUR) 20 to 30 million," he is quoted as saying.

Engine supplier Ferrari is reportedly demanding about half of a long overdue EUR 18 million bill be paid immediately.

"Welt am Sonntag has learned that only three of the required eight million has actually been paid," wrote Nuppeney, who said the situation could come to a head this weekend in Belgium.

Q and A with Lotus' Eric Boullier
Q:
How would you sum up the first half of the 2013 season?

Eric Boullier:
Overall I'd say it's been a positive start. There have been a lot of high points, but also perhaps some less satisfying moments. We've taken eight podiums from ten races so far, which is a great achievement for the team and shows that once again we've clearly made a step forwards from the previous year. Of course, amongst those highlights we've had three races – Monaco, Montreal and Silverstone – where we did not score as many points as we should have done, but the important thing is that we recovered from these small blips to challenge for wins at the NÃ¼rburgring and also in Budapest. For me it's a big positive to show that we have the capability as a team to bounce back and sustain a challenge against opponents with greater resources at their disposal.

Q:
If you could pick one moment as your highlight of the year so far, what would it be?

Eric Boullier:
Well I think that one is quite obvious. We're here to win, and the victory for Kimi at the opening race in Melbourne was a special moment for the whole team.

Q:
How do you rate the performances of both drivers at this mid-stage?

Eric Boullier:
I would have to give Kimi ten out of ten. He's done a terrific job right from the beginning of the season and his remarkable run of twenty-seven consecutive points finishes speaks for itself. No matter what happens he's always there, as we saw in the final few laps at Monaco. He is playing a big part in pushing the team forwards, and of course having such a popular character in the seat has its advantages too. For Romain it was a more difficult start to the year coming off the back of a tough season in 2012, and it maybe took him a little while to settle down and start performing to the best of his ability. With that in mind, it gives me great pleasure to see him learn from those experiences and to start delivering the kind of results we've always known he is capable of. In Germany and Hungary he really put together the complete package over two consecutive weekends, and this should now be his baseline. He knows that if he wants to be winning races and fighting for championships then he must deliver this kind of quality drive at every Grand Prix. If he can keep up this level, Romain can be a future contender for titles, I'm sure of it.

Q:
At the start of the season you stated P3 in the Constructors' standings as the target; is this still the aim?

Eric Boullier:
The championship is so close between ourselves, Ferrari and Mercedes at the moment that we really need to be aiming a little higher to make sure our goals are reached. I think therefore that to target P2 is a better ambition, and we will be pushing harder than ever to sustain that challenge. We have an ambitious group of people at Enstone and a top three placing at the end of the year is very much possible, which would be a fantastic achievement for everybody involved. We head into the next nine races on a real high.

Q:
The 2014 calendar looks set to be pretty full… what's your take on this?

Eric Boullier:
I think we first need to wait for the full calendar to be confirmed before assessing the situation in too much detail, but it certainly seems like we'll have some extra races next year and at some different venues too which is good for the sport. We'll also see the return of in-season testing, but we have the resources available here at Enstone to make sure the race team don't get over-worked. Without doubt it's going to be busy and we'll need to make sure we achieve the right balance, but as a team we're more than able to manage the schedule.

Q:
With major rule changes just around the corner, how do you see the remainder of 2013 unfolding?

Eric Boullier:
I think we will see most of the teams – with the exception maybe of Red Bull – slowing right down in their development of this years' cars in preparation for the challenge of 2014. With this in mind I think we are in a very strong position for the second half of the season, as our car is currently competing at the very front of the pack. We also have a strong upgrade package for Spa, which will most likely form our baseline for the remainder of the year, so our aim should be to continue fighting for podiums right to the end.