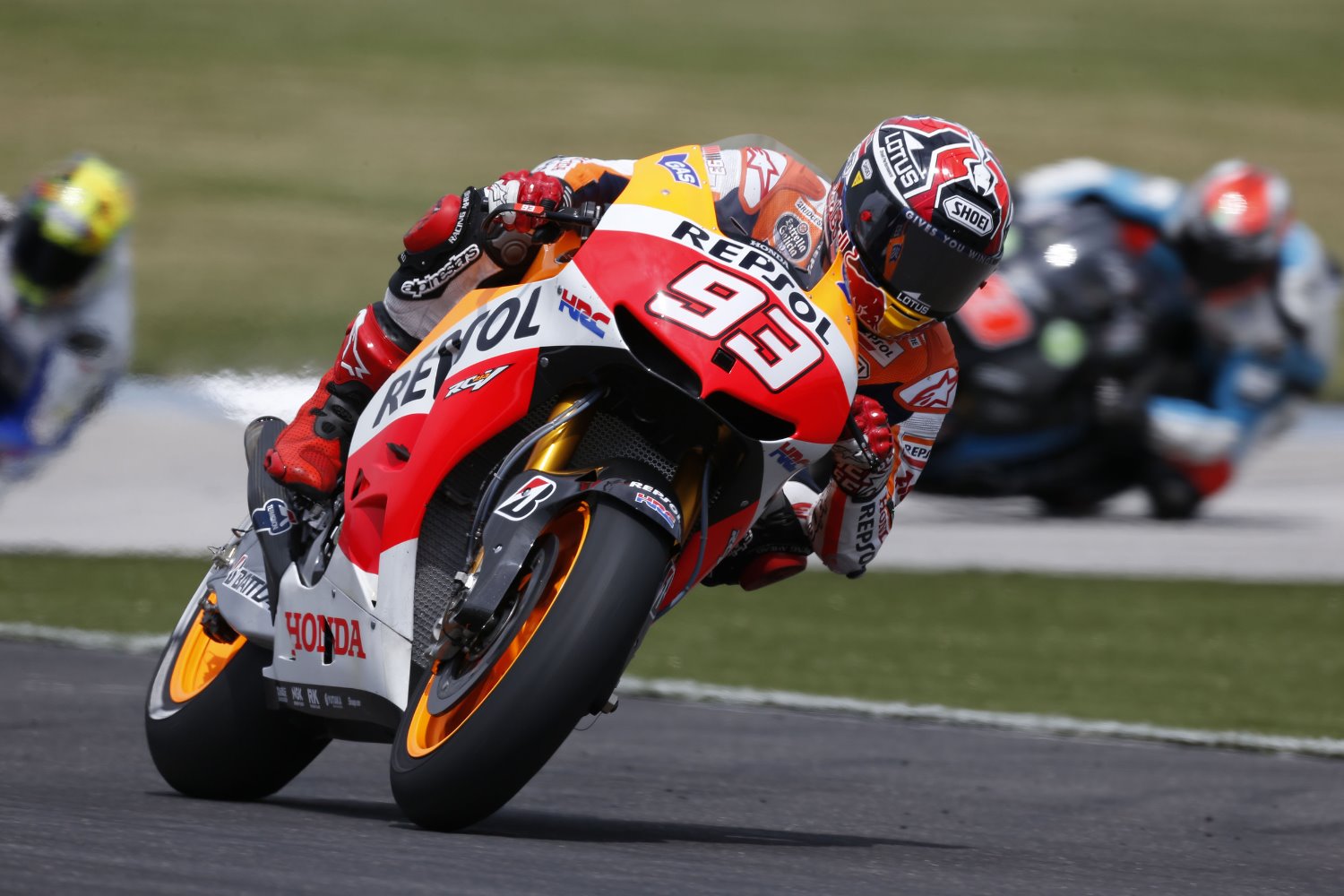 After leading every session of the weekend so far, Repsol Honda's Marc Marquez has taken his 4th pole position of the season for tomorrow's Red Bull Indianapolis GP. His sensational lap of 1'37.958 is almost a second faster than the previous record set by teammate Dani Pedrosa last year (1'38.813). Marc will be hoping to repeat his 2011 Moto2 performance where he emerged victorious after starting from Pole Position here at the famous Indianapolis Motor Speedway.

The reigning world champion was on typical form for the 15 minute qualifying heat, ensuring he was the first man on track as the session began. Wasting no time, the first flying lap saw him smash the all-time record for the circuit with an impressive 1’38.648 second lap. Lorenzo’s hold on the top spot was short lived as championship rival Marc Marquez then moved into first however he was determined to hold the front row. After a stop for a fresh rear tire he returned to the track with six minutes to go and delivered another hot lap, dropping his time to 1’38.471 to secure second place on the grid for the race.

For Dani Pedrosa, it was also a great qualifying session. Still feeling the effects from his recent injury, Dani was able to put in a great lap of 1'38.485 which secured him a front row start in 3rd position. Dani will be aiming for his 3rd win at this track in the MotoGP class.

Marc Marquez 1st 1'37.958
"I'm happy with how things went in the qualifying session. Obviously taking pole is important, but it's tomorrow that really counts. Besides that, the conditions change a lot, tire durability suffers and it will be tough as the race progresses. We knew the qualifying session was all about the single flying lap, the tires had a lot of grip then and I took advantage of it. I set a very good time and I think for tomorrow we are ready to fight for victory. As always, we will give one hundred percent"

Jorge Lorenzo 2nd / 1'38.471
“I’m happy with the pace, it’s not bad. We still don't know how well our rivals are prepared for the race but I think I have a constant pace to finish the race with a good speed. The bike has improved by some small details every session so I’m happy with that also. I’m happy to be back on the first row and confident we can fight for the podium. You can see that Marc, Dani and Stefan are really strong, normally we are with them but it's clear that this track is not so suitable for our bike, but it’s much better than it was in 2011. I am confident that we can fight to be not far from first position or maybe to fight for first."

Dani Pedrosa 3rd 1'38.485
"Today went well, we were able to improve our times, so I'm happy! Starting from the first row is good for us and the feeling with the bike is more positive, but we still have to choose the rear tire. The important thing for tomorrow is to start well and have a good race"