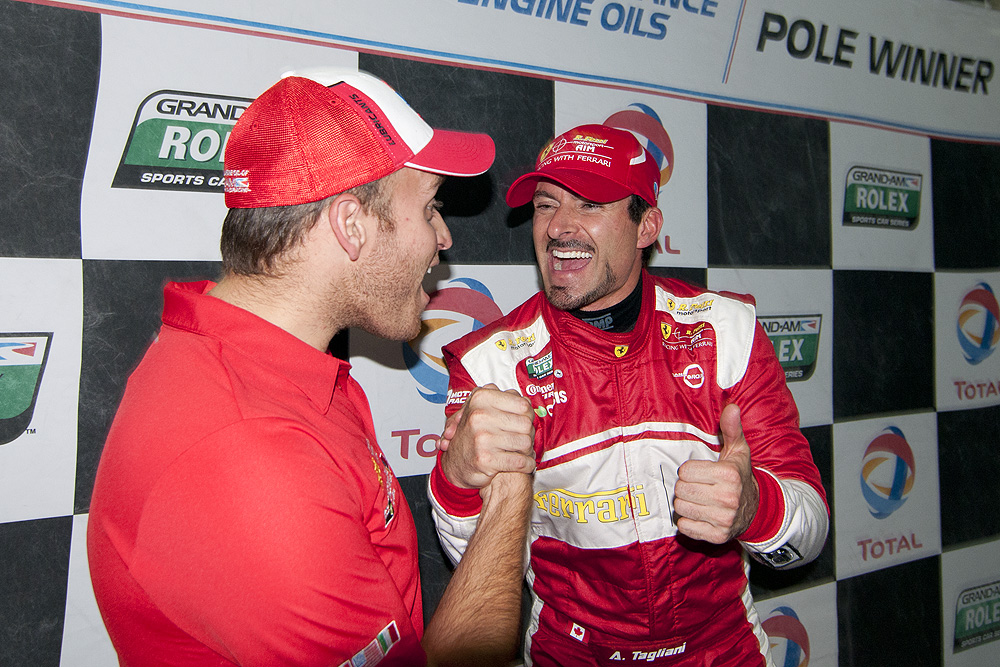 Debuting team driver Alex Tagliani wasted no time getting up to speed Friday in his debut race in the No. 61 R.Ferri/AIM Motorsport Racing with Ferrari 458 Italia at Kansas Speedway where the popular French-Canadian driver won the pole for tomorrow night’s inaugural SFP Grand Prix.

Tagliani is making his first race start with R.Ferri/AIM, first in a Ferrari and first with co-driver Jeff Segal, but he proved to be more than up to the task in the debut GRAND-AM Rolex Sports Car Series race weekend on the 2.370-mile Kansas Speedway road course.

“It’s incredible to get the call from Remo Ferri, to be here racing a Ferrari, and to be on pole position in our first race is unbelievable," Tagliani said. “It happened because they gave me a car that could do it. This is very special, to be a Canadian with Italian history racing a Ferrari for a Canadian-Italian team. Working with R.Ferri/AIM Motorsport is quite nice because I had a lot of help from everybody."

No. 61 R.Ferri/AIM Team Principal and Owner Remo Ferri was delighted with the debut performance of his Canadian-Italian countryman and latest driver.

“We run Ferrari, I am a Ferrari dealer and to have a Canadian Italian, well known in Canada do so well is just fantastic," Ferri said. “He adjusted very well to the car, he still doesn’t know everything about GRAND-AM racing, but he did a fantastic job the team did a great job on the set-up. So, a great day and we will see tomorrow what happens."

Tagliani will start tomorrow’s race and then hand off to race-finishing driver Segal who played a key role in fine-tuning the No. 61’s set-up the last two days. The sister No. 69 AIM Autosport Team FXDD Ferrari 458 Italia of Emil Assentato qualified third while a similar Ferrari driven by Leh Keen took second spot on the grid in an all-458 Italia top three.

“We have been working at it," Segal said. “It hasn’t come easy, we have changed the set-up every session, and in the last practice we really hit on something. We are trying to combine the best of what we found with what the 69 has, so really a team effort to get to this point. It is really fantastic to have our 61 car on pole with Alex and really awesome to see Emil just back there in P3 as well. It is really strong for our team."

The fact that teams found you actually have to aggressively drive the steep and high-speed banking at Kansas Speedway is another positive for the Ferrari contingent.

“It isn’t so easy on the banking and I like it because it is important for the car to be good for long runs," Tagliani said. “If you keep the tire underneath you, and maybe if you have an advantage on car handling, it will work out throughout the race."

The No. 61 R.Ferri/AIM team earned its first pole in June at the Detroit Belle Isle Grand Prix with Segal’s regular co-driver Max Papis. Tagliani is driving for Papis this weekend as “Mad Max" competes in the NASCAR Nationwide race at Mid-Ohio Sports Car Course.

“We still have race day ahead of us but we are very happy with the results our hard work has delivered so far," said Andrew Bordin, AIM Autosport Owner and Sporting Director. “To have both of the R.Ferri/AIM Ferrari and the AIM/FXDD Ferrari able to contend for the pole and tomorrow’s podium and race win is a great feeling. I am proud of everybody on the team."