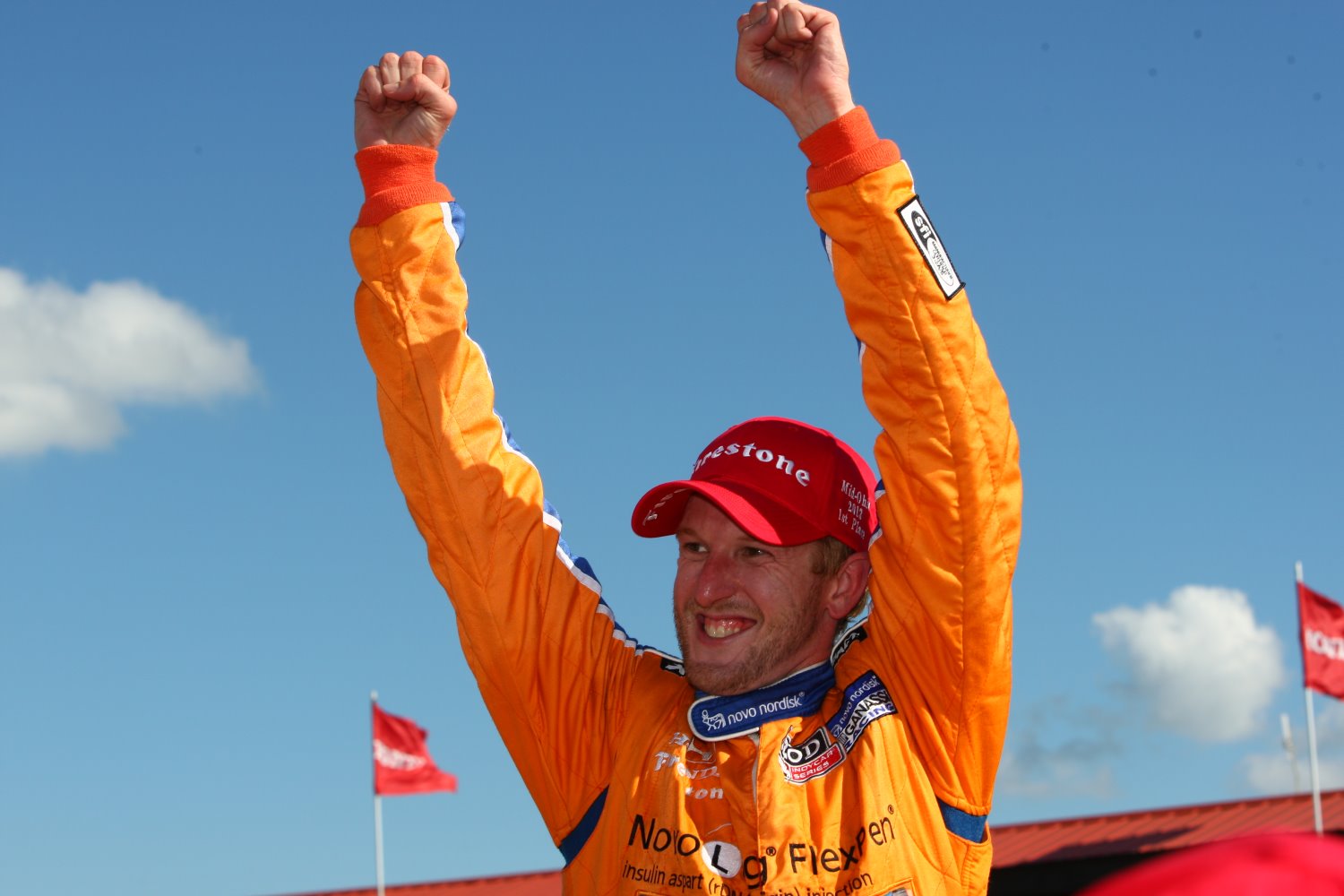 It was that day that the then-22-year-old's quality of life and blossoming racing career was dealt a blow as he was diagnosed with type 1 diabetes.

"I remember that day being pretty dark. And today is pretty bright," Kimball said after posting his first IZOD IndyCar Series victory in the Honda Indy 200 at Mid-Ohio on Aug. 4. "To come five years later and get a race win in what I think is the most competitive open wheel series probably in the world at the minute is pretty fantastic."

Through the intervening years, consultation and planning with his endocrinologist has allowed Kimball to continue his motorsports career. It's a matter of how he manages the autoimmune disorder that afflicts about 26 million (and growing) individuals in the United States.

It's a message he shares through initiatives of sponsor Novo Nordisk. Diabetes awareness and education are main topics of the programs, while Kimball's resolve of not being slowed by diabetes to pursue his dreams is the message.

"Together, we've grown our partnership from a small logo on my suit and talking about having diabetes to a full program," said Kimball about the global diabetes care company that aligned with Kimball in Firestone Indy Lights in 2009. "The opportunity for me to meet all sorts of great people with diabetes across the country, tell them my story and hear their stories, it reminds me that no matter how good or bad a day I have at the racetrack it's more important than just me in the race car.

"It's nice to be able to come back from that (diagnosis), rebuild and find a whole incredible community to be a part of."

He's also the newest member – the fourth this season — of the Indy car winning driver community. Kimball, who started fifth in the 90-lap race in the Honda-powered No. 83 NovoLog FlexPen Chip Ganassi Racing car, played out a three-stop strategy designed by race strategist Tom Wurtz and race engineer Brad Goldberg to perfection.

He overtook eventual race runner-up Simon Pagenaud on Lap 73 and went on to become the ninth different winner in 14 races this season.

"It's really special. It's special for me, but it's more importantly special for everyone that's helped me get here," Kimball said. "To be able to get that win was definite validation for Chip (Ganassi), for the Novo Nordisk Group, my engineer, Brad and all of the crew."

Kimball, who finished fourth in the Firestone Indy Lights standings in 2010, moved to the IZOD IndyCar Series the next season. He recorded two top-10 finishes in 17 races. Six top 10s, including a runner-up finish at Toronto, were highlights of 2012.

Entering the third season, Kimball and the organization had higher expectations. Qualifying for his first Firestone Fast Six session and delivering a fourth-place finish at Barber Motorsports Park in mid-April was a proper start. He added three top 10s in the next five races, and broke through July 7 by advancing from the 12th starting position to finish second to teammate Scott Dixon at Pocono Raceway.

"I said at the beginning of the year that the last couple of years we got the experience, we built the foundation and, as a team, we are ready to win. Now we just need to do it," Kimball said.

The victory came in Kimball's 45th IZOD IndyCar Series start, and he jumped from 11th to a tie with Andretti Autosport's three-time race winner James Hinchcliffe for seventh in the standings with five races remaining.

The drive on the 2.258-mile, 13-turn road course, where Kimball did not compete last year because of a fractured metacarpal bone suffered in testing at Mid-Ohio a week before the race, impressed teammate Dario Franchitti, who placed third in the No. 10 GE car for Target Chip Ganassi Racing.

"He's learning quickly," the four-time series champion said. "Bit by bit you see him get rid of his weaknesses, and he's smart and he's taken full advantage of the fact that he's a member of the team, the Ganassi team, and all the stuff that he has available to him, whether it's experience or the engineering group or equipment at his disposal. He's taking full advantage of it."