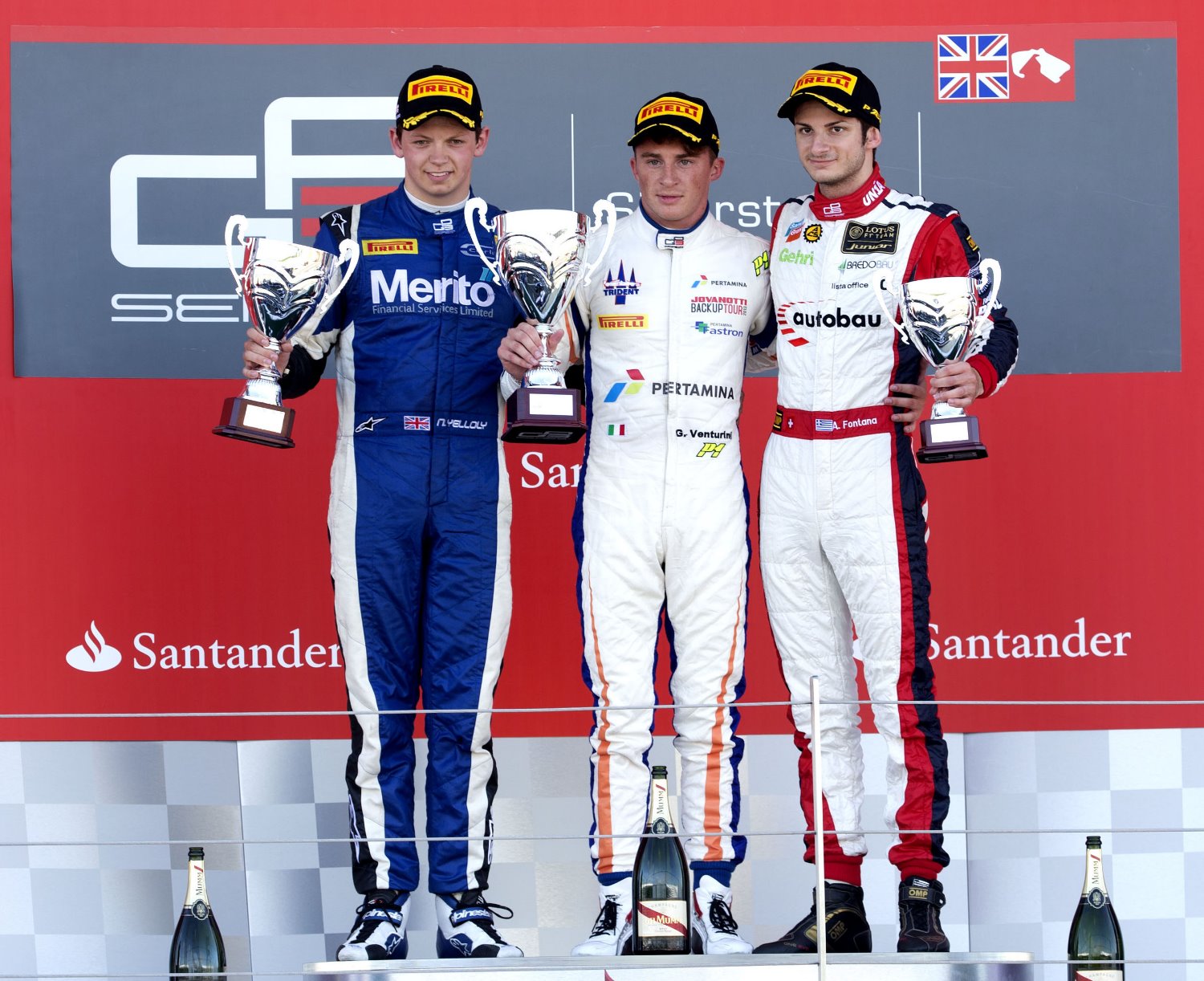 It was a race of firsts: Giovanni Venturini and his Trident team both celebrated their debut wins’ in the category as the Italian National anthem played out over the Silverstone circuit. The Italian driver took a commanding victory after starting from reverse pole and handled immense pressure from Carlin’s Nick Yelloly. The Brit finished P2 in his home race with Jenzer Motorsport’s Alex Fontana in third.

On another dry, warm day at the Northamptonshire circuit, Venturini made a good start but it was local favorite Yelloly who made an even better getaway, passing Fontana in the first few meters. The Carlin driver was quick to set his sights on the lead and got alongside the Italian, sneaking in front for a few seconds, but ran wide over the curb losing time, allowing Venturini reclaim his lead.

Dino Zamparelli, Emanuele Zonzini, Adderly Fong and Conor Daly didn’t complete lap one after being involved in incidents on the first lap. Daniil Kvyat (MW Arden), Facu Regalia (ART Grand Prix), Tio Ellinas (Marussia Manor Racing) and Jack Harvey (ART Grand Prix) were involved in their own tussle for P4 as the drivers looked after their Pirelli Super Hard tires early on ready for the push in the final laps.

There was nothing to give between Venturini and Yelloly at the front as the laps ticked down. Spurred on by the huge, home crowd, the Brit was trying everything in the final few laps to find a way through. The Italian defended with all his might, eager to taste victory in GP3 for the first time. Fontana was a keen observer, close in pursuit of the duo, ready to pounce on any mistake.

As the checkered flag was waved, Venturini expressed his joy of taking his first win, as did his Trident team jumping for joy in the pitlane at their success. P2 for Yelloly was his best result on his GP3 career, as was Fontana’s third place – the Swiss driver’s debut rostrum. Kvyat continued to collect points with fourth, with Regalia, Ellinas, Harvey and Aaro Vainio (Koiranen GP) rounding out the points positions.

Venturini’s win was the sixth different winner of the 2013 campaign showing what a competitive season GP3 is having. Today’s result also showcased six different teams in the top six.

Ellinas remains on top in the Drivers’ Standings on 69 points, Kevin Korjus (Koiranen GP) who narrowly missed out on a points finish in Race 2 is second on 59 points, with Conor Daly (ART Grand Prix) on 51. ART Grand Prix lead the Teams Standings with 134, next up are Koiranen GP on 103 and MW Arden are third with 85.

GP3 will be next in action for Round 5 in just a number of days when the Series travels to Nurburg in Germany on 05-07 July.