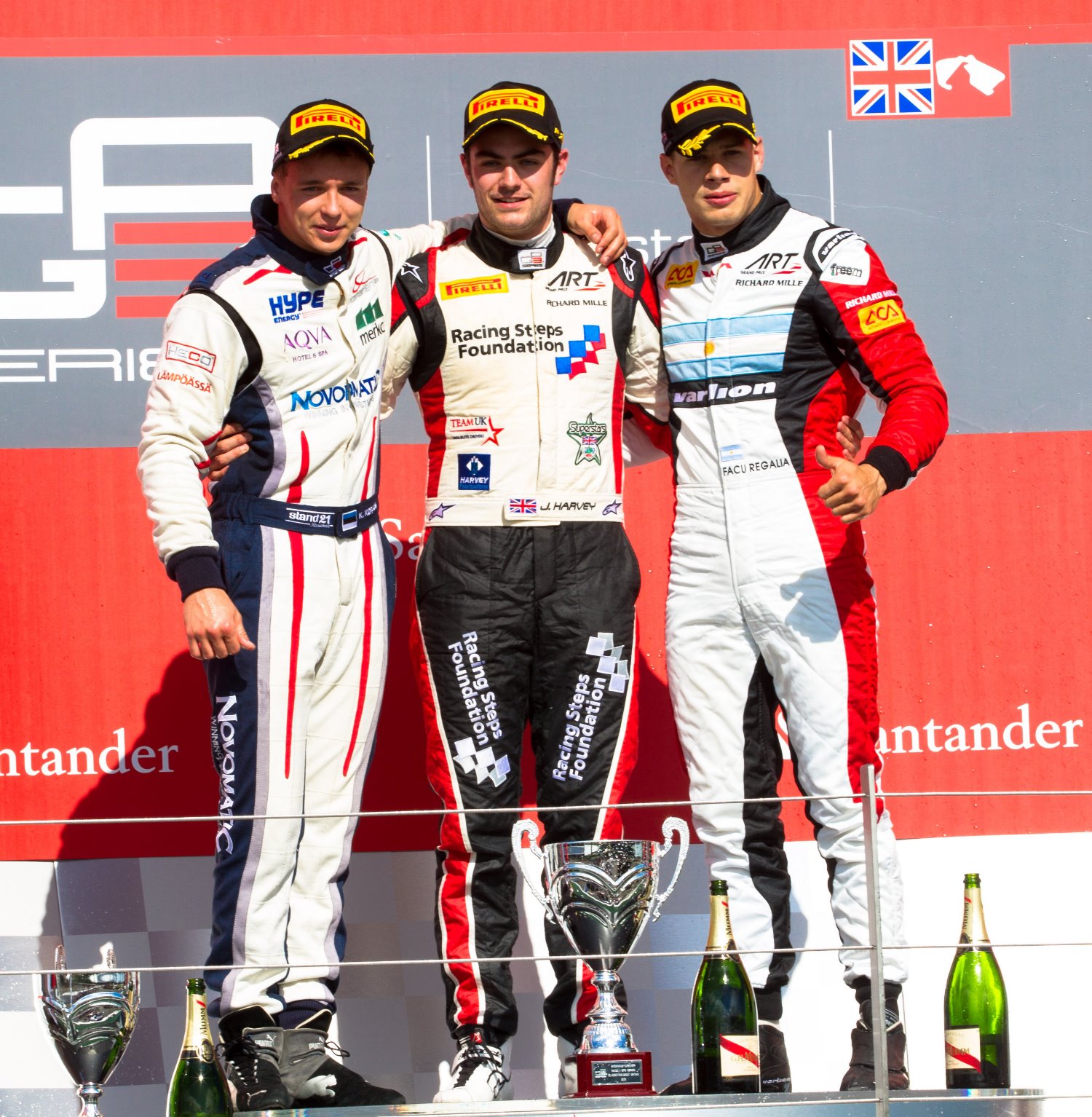 Happy Harvey! After narrowly missing out on pole position to Kevin Korjus, Jack Harvey (ART Grand Prix) made a brilliant start to claim his debut win in the category, topping it off by taking the honors at his home race in front of a large, enthusiastic Silverstone crowd, as well as pocketing points for fastest lap. Korjus (Koiranen GP) was second with ART Grand Prix’s Facu Regalia third.

Clear skies and a temperature of 20 degrees awaited the 27 GP3 drivers as they lined up on the grid. Korjus had pole but it was Harvey from P3 who made a great getaway to move into the lead and demote Korjus and Regalia. His ART Grand Prix teammate Conor Daly was also another man on the move, unfortunately the American made a jump start from P9 into P2 by the first corner.

Harvey was quick to build an advantage at the front, increasing the gap lap, by lap. Daly remained in P2, ahead of Korjus, Regalia, Daniil Kvyat (MW Arden) and Tio Ellinas (Marussia Manor Racing.) There was a collision between Patrick Kujala (Koiranen GP) and Trident’s David Fumanelli when the young Finn made contact with the back of the Italian’s machine which sent him airborne. Kujala was able to climb out of the car but the safety car was deployed due to the incident.

The safety car was released with a handful of laps remaining and Harvey managed the gap back to his rivals to retain his advantage. Daly had been issued with a 10-second drive-through penalty for a jump start and served it once the safety car had come in which dropped him down the order, thus moving Korjus and Regalia into second and third.

In the final laps the action continued to hot up with Carlin’s Nick Yelloly passing Alex Fontana (Jenzer Motorsport) for P6. Carlos Sainz (MW Arden) in P8 then fancied his chances on the Swiss driver but Lewis Williamson (Bamboo Engineering) seized the opportunity to overtake the Spaniard in front of his home crowd. The move was done until they duo went wheel to wheel with the Scot ending up on the grass, into a spin and a premature end to his race. Sainz was able to continue but lost pace and dropped down the order.

As the checkered flag was waved, it was a celebratory fist in the air for Harvey achieving his first win in the GP3 Series. Korjus, Regalia, Kvyat, Ellinas, Yelloly, Fontana, Giovanni Venturini, Adderly Fong (Status Grand Prix) and Dino Zamparelli (Marussia Manor Racing) completed the top ten points scoring positions. Trident’s Venturini will line-up on reverse pole for tomorrow’s Race 2 which will commence at 08.20 GMT.

Ellinas remains on top in the Drivers’ Standings on 65, with Korjus and Daly on 59 and 51 respectively. ART Grand Prix lead the Teams Standings on 126, Koiranen GP is second on 102 and MW Arden are third with 75.