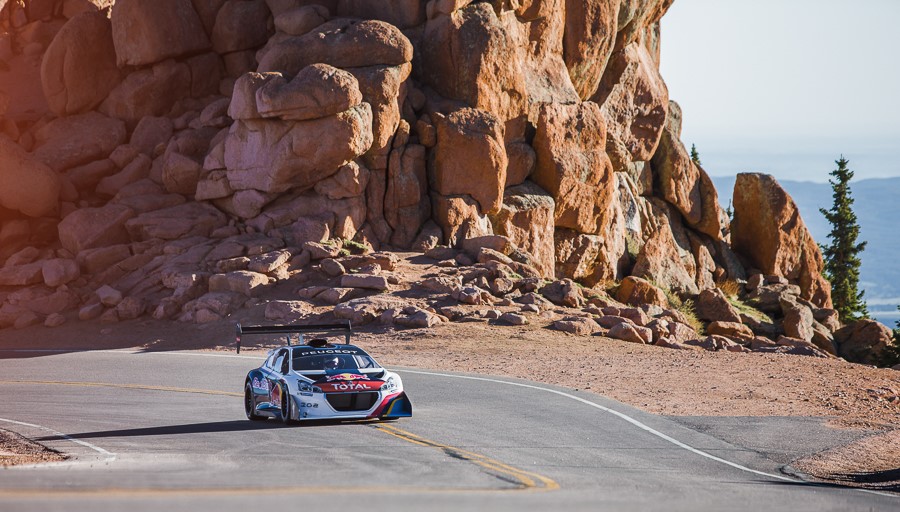 After weeks of anticipation, the gloves are finally off. Today, the Pikes Peak competitors went head-to-head in competition against each other for the very first time, in qualifying for Sunday’s epic hill climb event.

The 13 Unlimited class competitors – a category where the only rules are the ones governing safety – completed at least one run over the lower part of the hill climb to set a qualifying time. The fastest qualifier in each class gets to start first, with all the class competitors as a whole deciding which start window they would like to take on Sunday.

Sebastien Loeb with his 208 T16 Pikes Peak qualified fastest in the class on both runs, but he’s the first to admit that this does not count for much in the overall scheme of things. “It’s not like a race: qualifying isn’t really a crucial part of what goes on here, " said Loeb. “It’s how you perform on the day that counts. You have to rely on your own skills but also the car, the weather and the road conditions as well. Anything can still happen, but obviously we’re here to try and win: that’s our mission and we’ll be disappointed if we don’t achieve it. So far we’ve got off to a really good start."

At just after 07:00 this morning, with temperatures at 13 degrees centigrade, Loeb headed out for his first qualifying run in the 208 T16 Pikes Peak. The qualifying section of the hill was 8.30 kilometers long, with Loeb setting a time of 3m26.728s – 23 seconds ahead of his closest rival, Le Mans GT class winner Romain Dumas in a Norma prototype.

Dumas, like many of the other competitors, only arrived in Colorado recently so has benefited from less testing time than Loeb at Pikes Peak. As more competitors familiarize themselves with the unique demands of the circuit and its 156 corners, the times are sure to come down in competition.

The Peugeot team made some set-up changes to the rear of the car in time for the second run, which got underway at 08:24 in temperatures of 20 degrees centigrade. Showing remarkable consistency, Loeb posted a time of 3m26.153s – this time 17 seconds ahead of Dumas, who was again second-fastest.

Tomorrow and on Friday the competitors get the chance to practice on the upper part of the hill, before the race on Sunday. Peugeot’s project chief Jean-Christophe Pallier concluded: “Sebastien completed two clean qualifying runs with no problems at all. We’re happy with the set up of the car but we’re not taking anything at all for granted. I’m sure we not seen the ultimate pace of our rivals yet. Now the target is to stay fully focused to achieve our objectives. There’s a slight advantage in starting first, as it means that you definitely won’t be affected by other peoples’ racing incidents, but that doesn’t take anything away from the massive challenge that lies ahead."

The final start order will be published on Friday at 17:00.