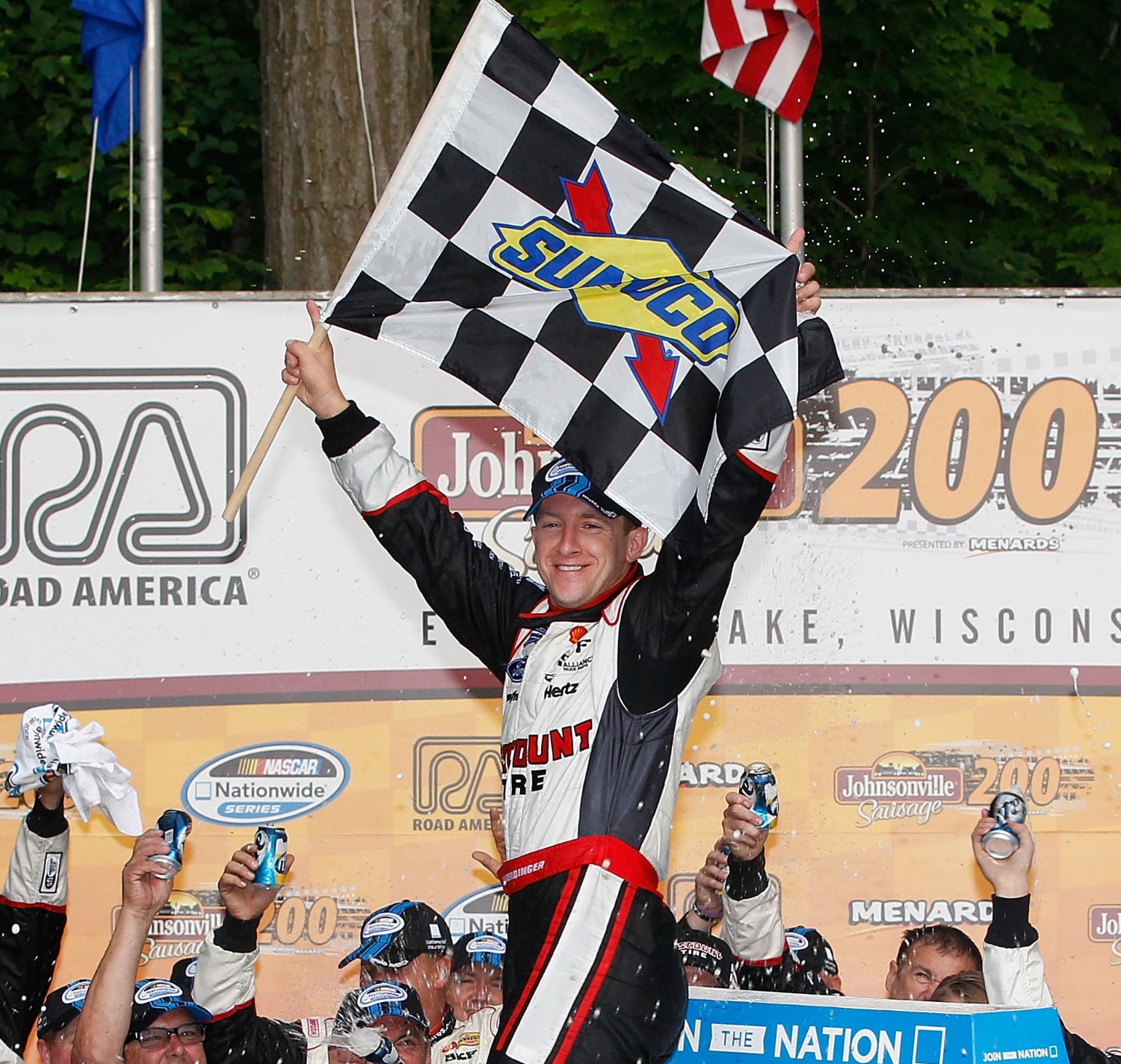 AJ Allmendinger won the first NASCAR Nationwide Series race of his career, surviving a grinding, thrilling race at Road America that saw leaders and contenders get wiped out in a variety of factors throughout the afternoon and into the evening.

Allmendinger led 29 laps in the Johnsonville Sausage 200 presented by Menards. He emerged from a spirited battle with a handful of drivers in a finish that included two attempts at green-white-checkered finish.

The initial green-white-checkered finish was stopped via a caution flag (the eighth of the day) when Michael Annett spun out into the grass, and couldn’t get his car back onto the course. It also wreaked havoc on the meticulously planned fuel strategies.

The late-race fireworks led to bumping, banging and passing in a frenetic finish that extended past the advertised distance.

Engine issues, spinouts and empty fuel cells all contributed to an unpredictable race on the 4.048-mile road course, the longest on the NASCAR Nationwide Series circuit.

Among the previous incidents, Kelly, a road-course specialist brought in to drive the Joe Gibbs Racing No. 54, contributed to a litany of the issues. He bumped series points leader Regan Smith on Lap 47,sending Smith into Billy Johnson and bringing out the sixth caution of the night.

Earlier in the race, Kelly tapped leader Kligerman on Lap 19, sending Kligerman’s No. 77 Toyota into the gravel pit. Kligerman deftly kept his car moving and away from the tire barrier, but his No. 77 Toyota was in 28th place when he steered it back onto the track (making his final showing all the more impressive).

Another favorite, Michael McDowell, went behind the wall on Lap 4 with an engine problem. His No. 18 Joe Gibbs Racing Toyota shut off coming out of Turn 5 when McDowell was running in the top three.

McDowell, who finished second in the race here last year, couldn’t get it refired and his car eventually came to a stop on the uphill leading into Turn 6.

Eventually, McDowell flipped the engine over to drive it to the garage, and the eventual diagnosis was a broken distributor. When McDowell came back on the track, he was in 37th place and five laps down.