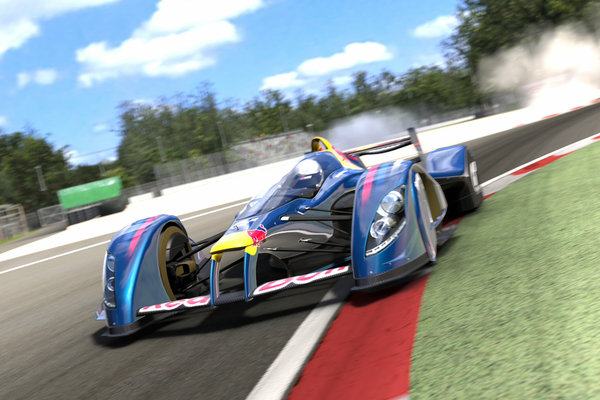 Back when the Gran Turismo racing game people asked (and this is old news, I realize), "What would the fastest racing car on Earth, free of any and all regulations, look like?" – the car envisioned was a single-seat canopied prototype wing car with covered front wheels powered by a 1500HP direct-injected Twin-Turbo V6. The projected performance was a theoretical top speed of 248.6 mph (400 kmh) and a lateral acceleration of 6G.

And then Red Bull Racing design guru, chief technical officer and master aerodynamicist Adrian Newey was brought on board to make the machine faster and better, and the resulting Red Bull X2010 Prototype came to virtual fruition. Utilizing the "fan car" concept first pioneered by Jim Hall and Chevrolet engineers in the infamous Chaparral 2J (the auxiliary fan sucking the car down on to the payment to produce unheard of cornering speeds), Newey also made changes to the design of the front and rear wings and rear diffuser, the entire package dramatically altering the X2010's aerodynamic capability.

The driver who performed the shakedown development session for the virtual racing machine was none other than three-time F1 World Champion Sebastian Vettel. In his first run on the virtual Suzuka F1 circuit in Japan, Vettel broke the course record by a staggering 20 seconds. And in a virtual test session on the 3.199-mile Nurburgring Grand Prix course (not the Nordschleife), Vettel did a lap of one minute four seconds, 25 seconds clear of Michael Schumacher's track record.

What's the point of all of this? It's the idea that racing should push the envelope to go faster and yes, even more efficiently than ever before. The Land of Restrictions that racing has become is counterintuitive to what racing should be all about. You need to push technological exploration in order to develop the everyday technology that we will have access to in our vehicles of the future.

I've heard all of the naysayers and most comments suggest that tracks aren't designed for the capabilities of those extreme machines and that the insurance industry wouldn't allow spectators to get near a race with those kinds of speeds. And so on.

I believe it could be figured out. New safety technologies would have to be developed – especially in the area of catch-fencing design – or maybe there could be an entirely new kind of circuit built somewhere that could accommodate the speeds and the crowds.

Adrian Newey had the right idea, and in roundabout fashion he basically envisioned F1 and IndyCar (if CART was still in control) of the 21st Century.

He also reaffirmed the notion that sometimes in life you have to just go for it. Autoextremist