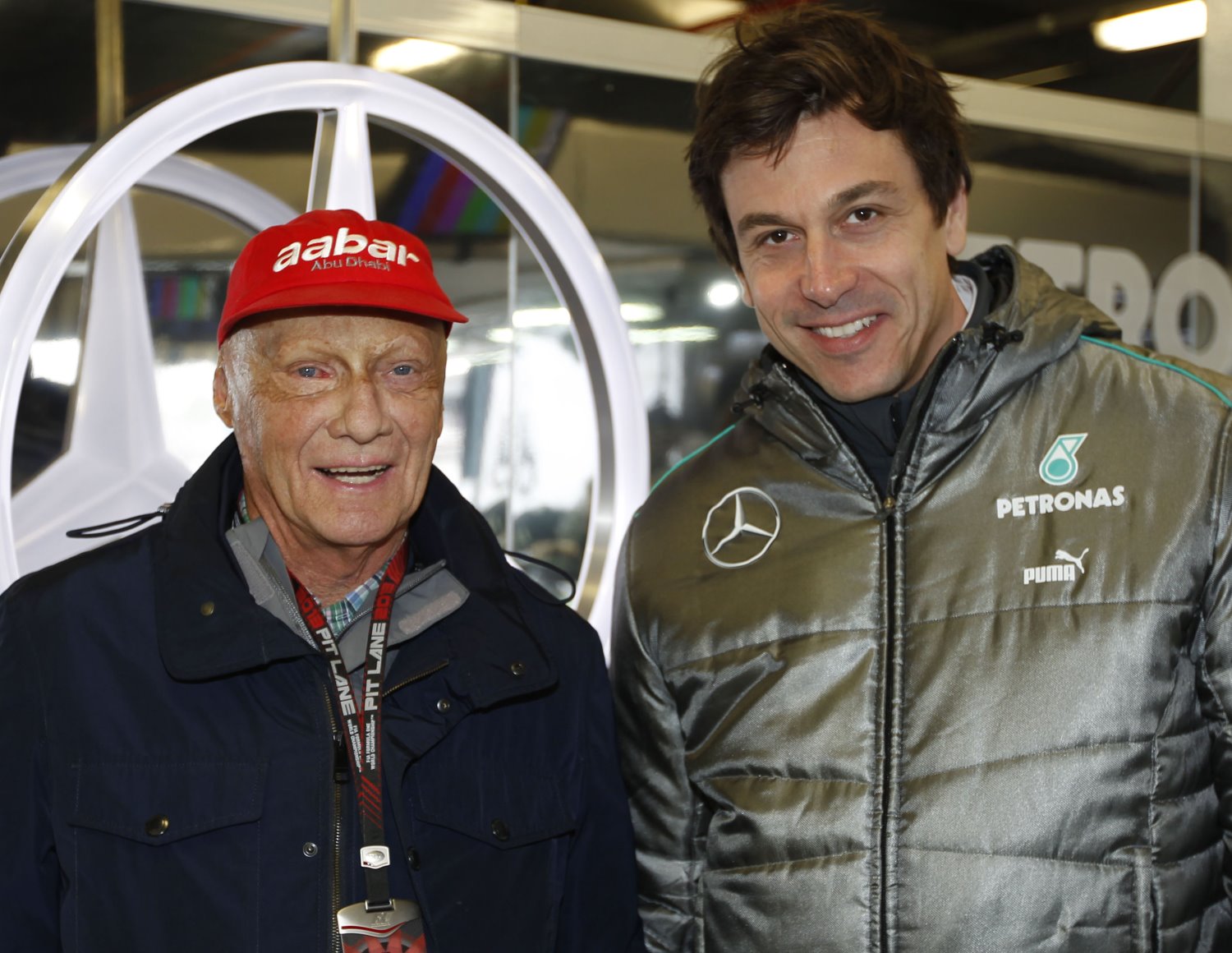 New co-owner for Lotus team
(GMM) Genii has sold 35 per cent of its Enstone based formula one team Lotus to an investment consortium.

According to a press release, Infinity Racing is comprised of private investors including an American hedge fund manager, an Abu Dhabi-based business group and royal family interests of a major oil-producing nation.

"As the team's results have continued to improve every year, we have been waiting for the right investor who will help make the jump to the top spot in the constructors' championship," said Genii chief executive Eric Lux.

Lauda, Wolff will not attend FIA hearing
(GMM) Mercedes has confirmed that new team co-owners and chiefs Niki Lauda and Toto Wolff will not be in Paris on Thursday.

We reported on Monday that team boss Ross Brawn will be the sole representative of the management of the German carmaker's Brackley based team as it faces the wrath of the FIA over 'test-gate'.

A Mercedes spokesman confirmed Brawn's attendance, and the absence of director Wolff, and chairman Lauda, to the German news agency DPA.

Brawn, who according to speculation could lose his job as a result of the 'secret' tire test scandal, will be accompanied by lawyers as well as team engineers, the APA news agency reported.

Triple world champion Lauda might be staying away from Paris, but he insists Mercedes should not be penalized for testing at Barcelona with its 2013 car.

"Mercedes got permission to test the 2013 car," he is quoted by the German broadcaster RTL. "The tribunal will show who is right."

Lauda has reportedly wagered 50 euros with Red Bull's Dr Helmut Marko over the outcome of Thursday's hearing, with the latter saying: "If this test is without consequence, negotiations about limiting costs will end and Pandora's box will open."

Brazil's O Estado de S.Paulo newspaper, however, reported that the job of Pirelli's F1 boss Paul Hembery could also be on the line "depending on what happens in Paris".

"Public opinion in Europe has extraordinary strength, and changing leadership is a way to respond," he wrote.

Dennis doubts women to race in F1 soon
(GMM) Ron Dennis has played down expectations there could be a female driver on the formula one grid in the near future.

Dennis, McLaren supremo, was asked this week when he thinks F1 will see a female driver on the grid once again.

"I don't think it will happen soon," he is quoted by Italy's La Repubblica.

"There are some sports that are difficult from a physical point of view for women, and formula one is one of them."

McLaren's lead driver Jenson Button, however, insists it is "possible" for women to race in F1.

"There are a couple of women racing in Nascar and IndyCar, have actually won races," he said.

"The big issue is that I don't think women are given the opportunity at an early age.

"It is a very demanding sport, very specific training and taking time to get race fit. I personally think it's possible," added Button.

Meanwhile, Dennis has also been quoted as firing a barb at a former McLaren driver for losing focus on the real 'objective' of the sport.

Caterham reserves judgment on 2013 drivers
(GMM) Caterham boss Cyril Abiteboul has backed the team's all-new driver lineup, amid suggestions Heikki Kovalainen should be drafted back in.

For the first time since its 2010 debut, the green-liveried team appeared to falter early this season with an outdated car and in the wake of experienced driver Kovalainen's departure.

Finn Kovalainen reappeared in Friday practice in Bahrain and Spain, triggering rumors he might soon replace either rookie Giedo van der Garde – slammed by Mark Webber in Canada as a 'pay driver with no mirrors' – or Charles Pic.

Abiteboul told F1's official website: "He (Kovalainen) definitely helped in the couple of sessions he ran, and in the feedback he gave."

But there is no sign the 31-year-old will appear again, even if Finnish commentator for MTV3, Oskari Saari, said: "I still believe he will race this season."

For now, Abiteboul is backing van der Garde, who will drop five places on the Silverstone grid after his crash with Webber in Canada, and Frenchman Pic.

"Same as with the team, I'd like to evaluate both drivers properly at the right moment, but for now I think both are making progress in parallel," he said.

Lotus' new co-owners won't 'sit idly' – report
(GMM) Lotus' new team co-owner has lurched into formula one with bravado, claiming the Enstone based team will be "number 1 in twelve months".

Former 100 per cent team owner Genii Capital announced on Tuesday that Infinity Racing, comprising an American hedge fund, an Abu Dhabi group and an oil-rich royal family, has bought 65pc of the team whose lead driver is Kimi Raikkonen.

Telegraph correspondent Tom Cary reported on Wednesday that the royal family is "believed to be Brunei", whose Sultan is among the richest people on earth.

"It is clear the new shareholders are not going to sit idly in the background," said Cary.

Infinity's chairman is Mansoor Ijaz, a New York-based American of Pakistani ancestry who is an investment banker and media commentator.

In a bullish first interview with Sportspro magazine, he insisted: "I say it simply, flatly, completely — we'll be number 1 in 12 months."

He was more cautious when it came to the reports about the Brunei link.

"I will not comment on the royal family, whether it's Brunei or not — I'm not going to comment on that," said Ijaz.

But he did say Infinity is entering F1 "to bring our technological capabilities", while Tuesday's press release referred to the KERS technology in the sport.

"I won't go too much into that today because I want to keep some elements of surprise in terms of what we're going to do to win the championship, but we have enormous technological capabilities that we can bring and we're going to make Lotus the number one team for sponsorship within the next year," added Ijaz.

He said his younger brother Mujeeb will be "an important part of the story".

"I would say we will be integrally involved in the technology development side, as the engines change next year, as technology comes to the front," said Ijaz.

That is the claim on Wednesday of the respected Auto Motor und Sport correspondent Michael Schmidt, as F1 braces for the first ever hearing of Jean Todt's new international tribunal.

Reportedly armed with lawyers and engineers of the Brackley based team, the sole Mercedes chief deployed to Paris on Thursday morning will be Ross Brawn, after a spokesman confirmed that Lauda and Toto Wolff will not be there.

After a disappointing first three years of the 'works' F1 foray, the Austrian pair are the new faces at Mercedes, and both shareholders.

There has been speculation Brawn will be the scapegoat, or fall guy, with former McLaren technical director Paddy Lowe already at work at Brackley, and earmarked to eventually succeed Brawn.

"It was my decision to do the test, so that's a fact," Brawn told reporters in Canada recently. "Let's see what occurs at the tribunal and go from there."

Schmidt reported on Wednesday that Lauda, the triple world champion and Mercedes F1 chairman, first heard about the highly controversial Barcelona test "when the wheels were already turning".

He added that Lauda's deputies insisted that permission had been sought for the use of the 2013 car.