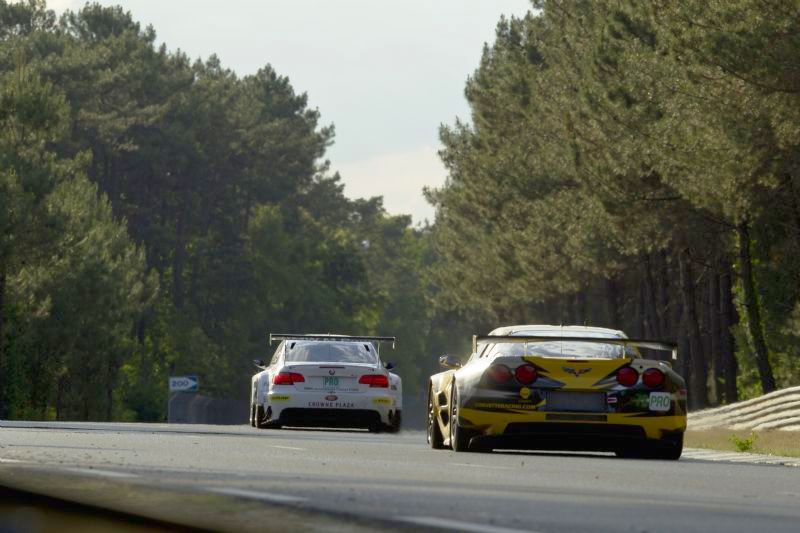 Each year in the middle of June, the road-racing universe turns its eyes to the Sarthe region of France for the world’s most famous endurance event. Corvette Racing is back at the 24 Hours of Le Mans in search of its eighth class victory since 2001.

The two velocity yellow Compuware Corvette C6.R race cars undertook a successful test at Le Mans on Sunday, June 9. Jan Magnussen in the No. 73 Corvette set the team’s best time in of 3:59.491 (127.3 mph) to rank fifth in the GTE Pro class. The top six cars in the class were less than a second apart, a preview of how close and competitive things will be for the June 22-23 race.

Magnussen partners with full-season American Le Mans Series teammate Antonio Garcia and Jordan Taylor (endurance races). Magnussen and Garcia took a trip to victory lane at Laguna Seca in early May. Meanwhile, in the No. 74 Corvette C6.R, defending ALMS GT champions Oliver Gavin and Tommy Milner team with Richard Westbrook for the prestigious race. The trio already scored victory together this season at the Mobil 1 Twelve Hours of Sebring to open the season.

“The test day confirmed what we already knew," said Mark Kent, Director of Racing – Chevrolet. “This year’s GTE Pro class will be the deepest and most competitive in which we have competed. As always, we welcome the monumental challenge that only Le Mans can provide. Experience has taught us that it takes an exceptionally well-coordinated effort from everyone on our team to succeed. We demonstrated that skill and commitment at both Sebring and Laguna Seca and I am confident our guys can deliver again on the biggest stage here in France."

Oliver Gavin’s Le Mans career with Corvette Racing reaches the “dandy dozen" level this year when the Englishman makes his 12th start at the 24 Hours of Le Mans on June 22. The four-time winner – who drives the No. 74 Compuware Corvette C6.R with Tommy Milner and Richard Westbrook – discusses the challenge of Le Mans.

Question: How important was the victory at the Sebring 12 Hours in March, and can you take anything from that to Le Mans?

Oliver Gavin: The momentum we gained at Sebring can put us in good stead for Le Mans. I think it’s something that will give us a certain amount of confidence, especially coming off the battles of winning the ALMS championship last year. Tommy and I have really established a very good partnership. We seem to work really well together. Some races, we are right together in terms of lap time and that’s fantastic; it’s happening more and more now. It’s great to see that this partnership is working so well.

Q: What is the secret to Corvette Racing’s success?

OG: It starts with the people at the top – those who are running the program whether it is people like Doug Fehan (program manager), Gary Pratt (team manager) and Doug Louth (engineering manager). They do the basics very, very well. They aren’t trying to overcomplicate things. They know they don’t have to re-engineer the wheel. They aren’t trying to find a silver bullet. They know that to win the 24 Hours, you have to have good pit stops, cars that are strong and reliable, and drivers who can drive them. You have to have momentum going into it where everyone is confident and comfortable with their jobs. That’s the reason Corvette has been so successful. It’s nothing secret.

Q: With all the depth in the GTE Pro class, do you think the strongest competitor may come from within your own team with the No. 73 car?

OG: They have two of the most experienced drivers in the whole field in Antonio (Garcia) and Jan (Magnussen). I’ve never driven with Antonio but I’ve driven with Jan for four years off and on so I know how strong a competitor he is. It’s a huge amount of fun racing with and against him. Antonio is much the same. Whereas Jan can be a bit bullish, feisty and will hound you throughout, Antonio operates a bit under stealth. He is an assassin who creeps up on you, bangs you over the head and passes you. He’s a very clever guy in the car and is calculating all the time in the car. That’s a great thing to have in a 24-hour race – thinking constantly about the long game and not necessarily what’s happening right in front of him at that point. And then Jordan (Taylor) is going from strength to strength. Sure, he’s lacking experience at Le Mans but he’s gaining confidence all the time. He is having great success in GRAND-AM and hopefully he comes to Le Mans full of confidence and ready to go. Jordan is learning all the time and is maturing. He is willing to listen and is great to have on board.

Q: So who do you think presents the biggest challenge at Le Mans?

OG: If I were a betting man, I’d put my money on Aston Martin (being the biggest threat). They’ve loaded everything up into this one year. It’s their 100th anniversary and it’s their opportunity to nail it for a victory at Le Mans. They have great lineups and experience. They were exceptionally fast at Sebring, Silverstone and Spa. For the first couple hours (at Le Mans) in 2012, I was racing against (Stefan) Mucke as I remember racing the Aston Martins in 2005-08. Porsche also have been very smart approaching this year. They aren’t to be underestimated and never show up just to bolster numbers. The real unknown is SRT and Viper. They have been fast in a lot of races. We don’t know whether that big 8-liter motor is going to make a difference. You can’t get away from the fact that Le Mans is all about horsepower. It’s all very new for them. Whether their car is right for 24 hours is the biggest question. Then there is Ferrari who always is right there. The class is incredibly strong. I can’t remember it being as strong as it is right now."