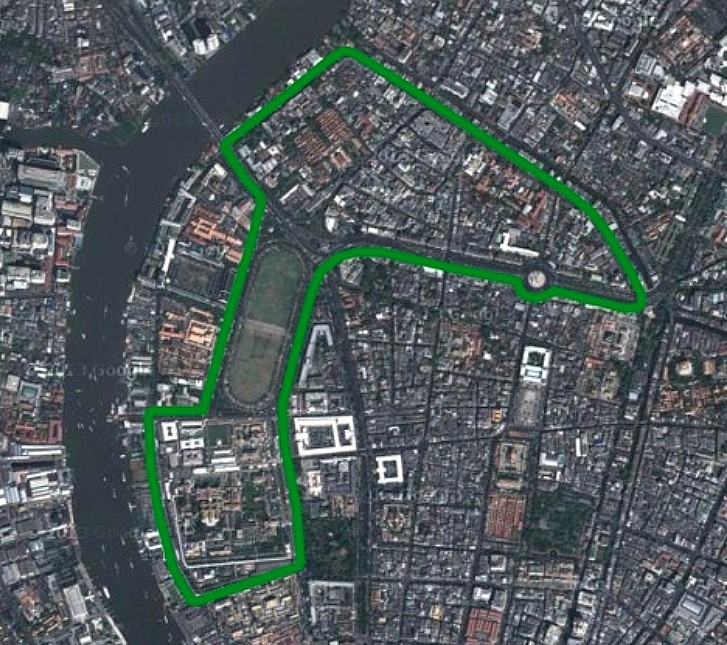 Authorities said in April that a 5.995km circuit would be created near the Royal Thai Naval Dockyard in Bangkok, with the hope of landing a deal to host a Formula 1 race in 2015.

The track would have run past the Grand Palace, the Temple of Dawn and Victory Monument.

The plans, however, have suffered a setback after Bangkok's Metropolitan Authority passed a law that bans racing in the area.

"The law came into effect on May 16 prohibiting car racing in inner Bangkok because that area is a conservation for culture and arts," Kriangphon Pattanarat, director general of city planning department told AFP. Autosport

04/28/13 Added better photo of the Bangkok street circuit below.

04/25/13 Thailand has agreed to a proposed route for Bangkok's Formula One race in 2015, officials said yesterday.

Kanokphand Chulakasem, governor of the Sports Authority of Thailand, said the committee on the circuit for the country's inaugural Grand Prix approved the 5.995km route suggested by foreign experts at yesterday's meeting.

The route would give spectators and TV viewers the chance to see several tourist spots such as the Grand Palace, Victory Monument and Temple of Dawn, Kanokphand said.

Makeshift stands could be built in several areas along the route and would be able to accommodate about 150,000 people, according to the governor.

"As the starting and finishing point would be on the bank of the Chao Phraya River, we may be able to build the main stands in the river. It would also be convenient for transportation of equipment," he said.

"Only a small group of residents would be affected by the proposed route."

Suwat Sitthilor, permanent secretary for tourism and sports, said the route and other plans for the night race will be submitted to the cabinet for approval within three months.