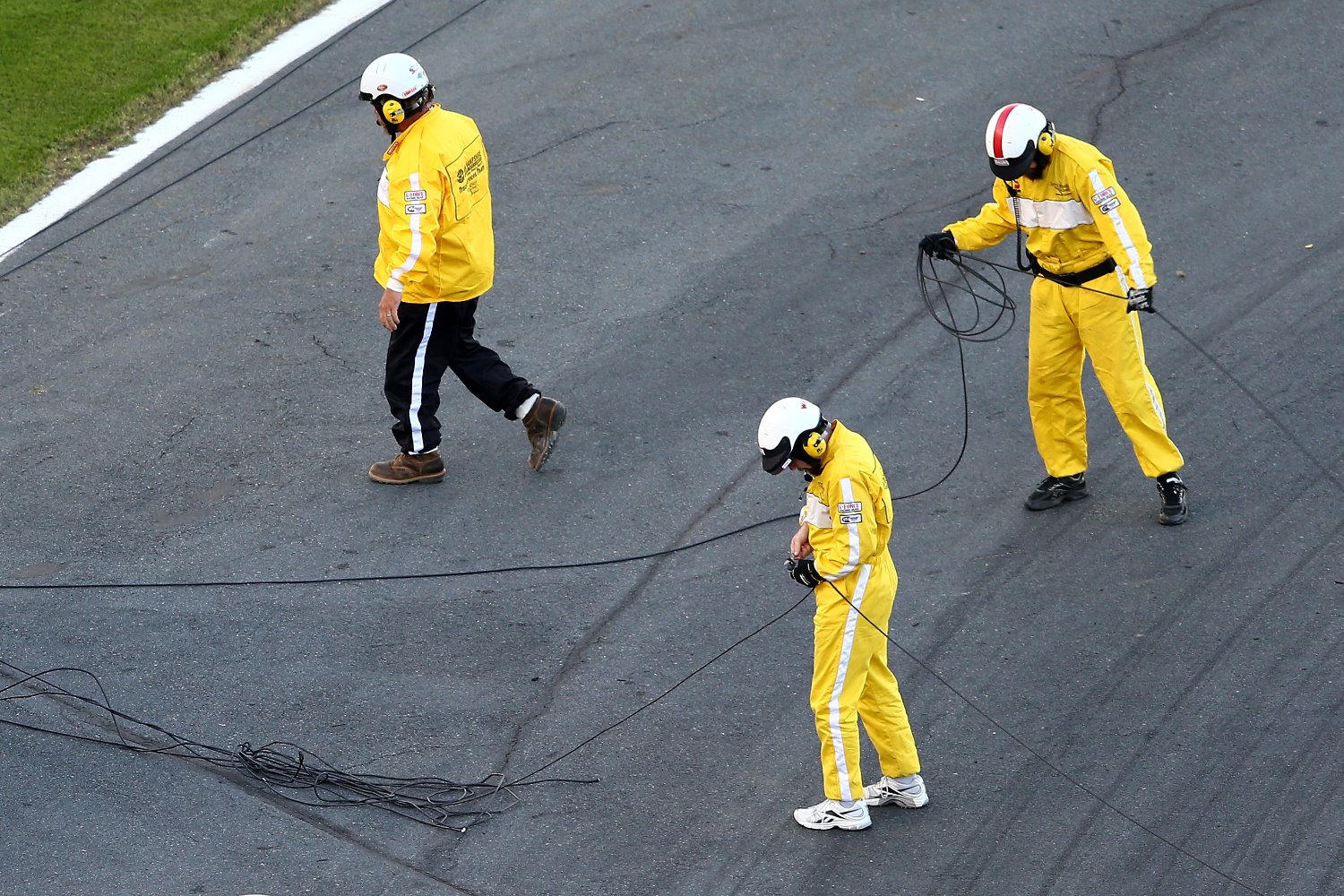 UPDATE #3 Charlotte Motor Speedway said 10 fans were injured Sunday at the Coca-Cola 600 and three of them were taken to the hospital after a nylon rope supporting a Fox Sports overhead television camera fell from the grandstands and landed on the track surface. CMS vice president of communications Scott Cooper said after the race that all three fans were treated and released from the hospital. He said he couldn't discuss the nature of their injuries due to privacy laws. Cooper said seven other people were treated with minor cuts and scrapes at the track and released. Associated Press

05/27/13 FOX Sports issued the following statement today: Everyone at FOX Sports is relieved and thankful to know that the injuries to fans caused when CAMCAT malfunctioned Sunday at Charlotte Motor Speedway were minor, and those who received hospital treatment were released last night. As stated previously, we regret that the race was affected, and we apologize to the racers whose cars were damaged, to everyone at CMS, NASCAR, and NASCAR fans, especially those who were hurt. At this time, we still do not have a cause for what happened, but a full investigation is underway, and use of the camera is suspended indefinitely.

The rope is made of Dyneema, an ultra-strong synthetic that has the same approximate strength of a steel wire with the same diameter, and is less than a year old. According to the company, it had been factory-tested by the manufacturer and its breaking strength is certified before shipment. It was also inspected by CAMCAT upon receipt last June. The rope was certified to have a breaking strength of over 9,300 pounds. The force exerted during last night's race was less than 900 pounds.

FOX Sports is reviewing with CAMCAT equipment maintenance records, history and installation information and will share those findings with NASCAR and CMS.

05/27/13 Official Statement from FOX Sports: "At this time, we do not have a cause for the failure of the camera drive line that interrupted tonight's Coca Cola 600 at Charlotte Motor Speedway, and our immediate concern is with the injured fans. The camera system consists of three ropes — a drive rope which moves the camera back and forth, and two guide ropes on either side. The drive rope failed near the Turn 1 connection and fell to the track. The camera itself did not come down because guide ropes acted as designed. A full investigation is planned, and use of the camera is suspended indefinitely. This camera system had been used successfully at this year's Daytona 500, last week's NASCAR

Sprint All-Star Race and other major events around the world. We certainly regret that the system failure affected tonight's event, we apologize to the racers whose cars were damaged, and our immediate concern is for the race fans. We also offer a sincere 'thank you' to the staff at CMS for attending to the injuries and keeping us informed on this developing situation. When we have more information on the cause of the equipment failure, we will share it with you immediately." FOX Sports

NASCAR officials red-flagged the Coca-Cola 600 on lap 127 after a cable that was part of the FOX Sports SkyCam snapped and fell onto the racetrack, causing damaged to several racecars.

NASCAR brought the entire field to pit road for a 15-minute red flag, during which time crews could repair any damage on their cars that was caused by the cable. They also allowed teams to keep the track position they were in at the time the caution flag waved.

Kyle Busch, who was leading at the time, appeared to have the most damage, with a large portion of the right-front fender of his no. 18 Toyota Camry ripped away. Marcos Ambrose, Mark Martin and polesitter Denny Hamlin also suffered damage.

There is no word on whether any spectators were injured. The camera itself remained attached to the support cables above the frontstretch. Pete McCole