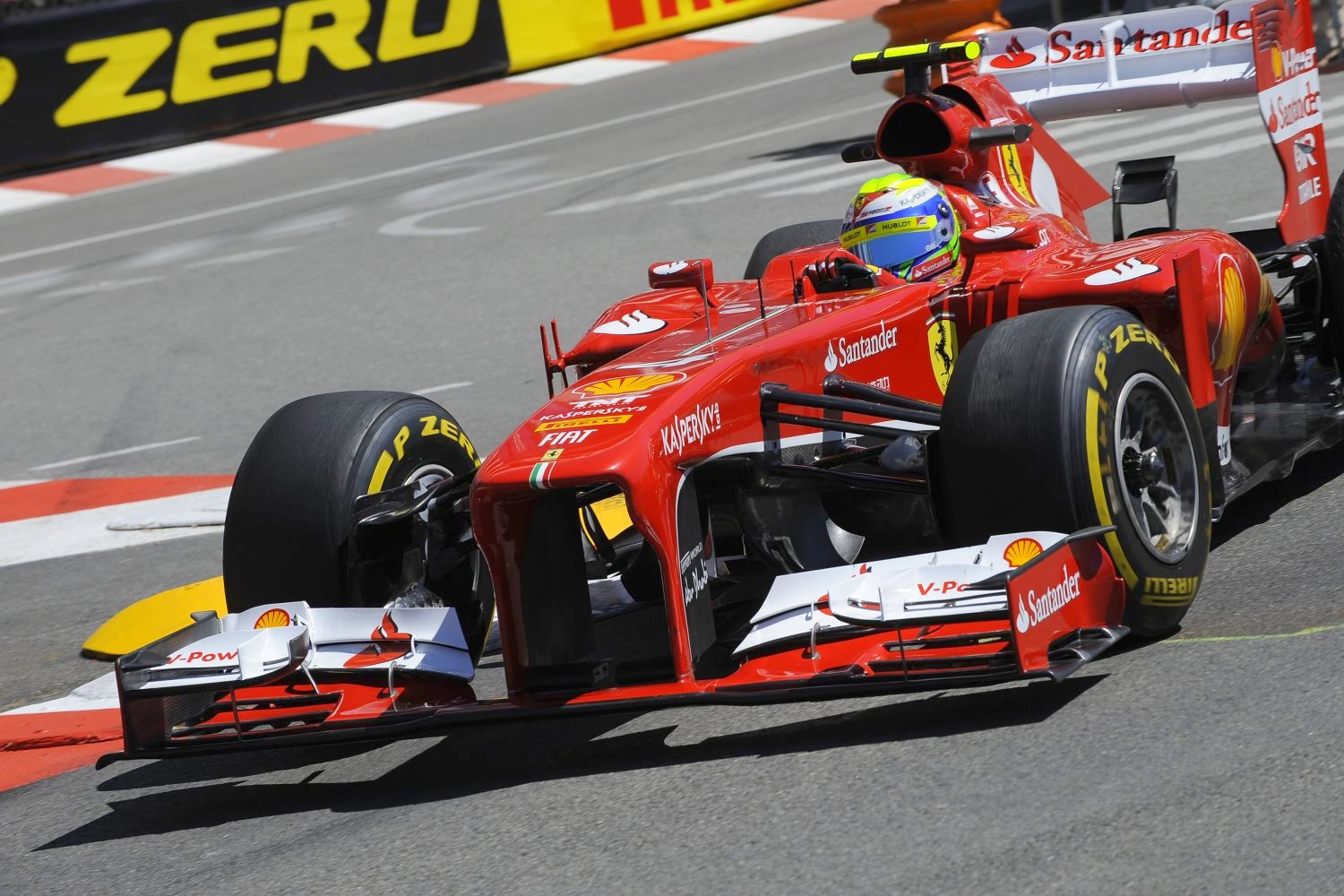 Massa to recover in time for Canada
(GMM) Felipe Massa left hospital following checks on Sunday and should be fit for the Canadian grand prix in two weeks.

Whilst already suffering from a sore neck from his practice crash, the Brazilian suffered a near-identical incident during the Monaco grand prix.

After initially recovering trackside in a neck brace, Massa was transferred to hospital for checks but later Tweeted a thumbs-up photo from his Monaco apartment.

"He is fine," said Ferrari team boss Stefano Domenicali, "and I believe that in the space of a few days he will back in perfect shape and ready to race in Montreal."

Although Massa's two Ste Devote crashes this weekend were almost identical, Ferrari believes the first was caused by hitting a bump.

And "It seems that (Sunday's) incident can be attributed to a problem on the left front corner of the car," said technical director Pat Fry.

Before the Monaco grand prix, Red Bull and Ferrari filed an official protest, arguing the three-day test with a 2013-spec car was a breach of the sporting rules.

Having conducted an investigation after Sunday's race, the FIA confirmed it knew Pirelli wanted to do the test, but only gave a conditional green light in the event "every team is offered the opportunity" to also test.

"The FIA received no confirmation that all teams had been given an opportunity to take part in this test," the FIA statement added.

F1's governing body is not ruling out the intervention now of the International Tribunal, which could "inflict penalties".

Mercedes' Niki Lauda, however, told Brazil's O Estado de S.Paulo that the FIA "sent a delegate" to the test, and that Charlie Whiting and Bernie Ecclestone knew about it as well.

A Pirelli spokesman said Ferrari was invited to test and turned down the offer, while Dr Helmut Marko said a Red Bull engineer had also been "informally" asked.

It is rumored that Red Bull and Ferrari both said no because they believed the test would have to be done with a two-year old car.

Indeed, between Bahrain and China, a Pirelli tire test took place with a 2010 Ferrari.

But "Every team would like an exclusive test with a current car," Red Bull team boss Christian Horner said on Sunday.

"There was only ten days between the request and the test," he said, "which is not enough time to produce any development parts."

And Mercedes chairman Niki Lauda insisted: "When we were asked to do this, our team boss Ross Brawn called Charlie Whiting and asked if a test is compatible with the sporting regulations.

"Charlie consulted with the FIA lawyers and gave us the green light.

Christian Horner confirmed that Red Bull was asked by Pirelli. "We declined," he said, "because we are of the opinion that such a test violates the regulations."

Wolff, however, is livid, particularly as the storm coincided with Nico Rosberg's convincing victory in Monaco.

"The term 'sore losers' comes to mind," he is quoted by Speed Week.

But the question remains: did Mercedes unfairly benefit from the exclusive test?

"Impossible to say," quadruple world champion Alain Prost told France's RMC Sport, "but I don't think we can say this win was because of the test. That wouldn't be fair.

"What is certain is that unauthorized things are not allowed. Time will tell," the great Frenchman added.

A report in the Telegraph said the Enstone based team's latest accounts show an almost $86 million loss for 2012, due to declining sponsorship.

"No other F1 team filing publicly-available accounts has ever lost as much money," said Sylt.

There could be more bad news around the corner for Lotus, amid continuing rumors top driver Kimi Raikkonen could jump ship to Red Bull at the end of the year.

"That would be a shame for Lotus," F1 legend Alain Prost told Welt am Sonntag newspaper, "because he has done a great job for them. But it's his decision."

At the same time, Raikkonen's teammate Romain Grosjean is back in the wars, this time penalized ten places on the Montreal grid for crashing into Daniel Ricciardo on Sunday.

"I think patting him on the head is not working anymore," the Finn told MTV3 broadcaster. "Something is going to happen and I'm sure the team is thinking about what to do."

"He's done a lot of damage and I don't think Lotus are flush with money," he said on BBC television. "They don't expect four crashes (in one weekend)."

Lotus, however, was also complaining about an erratic driver, following Sergio Perez's feisty race in the McLaren.

Raikkonen called the Mexican "stupid" and an "idiot" after their run-in at the chicane.

"Actually that (idiot) is a nice word compared with what he really said," said team boss Eric Boullier.

Pirelli 'approaching' 2014 F1 contract – president
(GMM) Pirelli is closer to inking a deal to stay in formula one beyond 2013, following a meeting in Monaco.

After Paul Hembery warned that Pirelli could quit F1 due to the delayed negotiations, Spain's AS sports newspaper reports that Pirelli president Marco Tronchetti Provera met with Bernie Ecclestone.

"We are approaching the conditions (to sign)," Provera said, "so we'll see.

"The fact is that Bernie is happy with us and also our company is still interested in the F1 project, so I hope we can get to an agreement soon and all will be well," he added.

Tronchetti Provera said he is proud of Pirelli's contribution to the sport so far.

"We were asked to add more 'show' to the races, and I think the races are better now than before our arrival, so I think in that sense we have succeeded," he insisted.

As for the controversy caused by Pirelli's heavily degrading compounds in 2013, he explained: "We have developed the tires with a car several years old, and with not enough days of testing."

Meanwhile, it seems Pirelli will introduce some changes to its tire design for Canada in two weeks after all, despite the opposition of some teams, including Force India.

"I did it like the old days," Bernie Ecclestone is quoted by Germany's Auto Motor und Sport. "I told the teams that they should be united.

"Pirelli will modify its tires as planned," the F1 chief executive revealed.

Alonso: Only McLaren can be happy with Perez
Sergio Perez has come under come under fire from Fernando Alonso and Lotus boss Eric Boullier after an action-packed Monaco GP.

Perez was involved in incidents with his McLaren team-mate Jenson Button, Ferrari's Alonso and Kimi Raikkonen on Sunday. Button once again complained during the race about his team-mate's driving while Alonso and Raikkonen's Lotus team were also not pleased.

The Mexican ducked on the inside of Alonso at the chicane, which forced the Spaniard to cut the corner and he was later told to give the place to the McLaren man. Perez tried to pull off the same daring move on Raikkonen in the closing stage of the race, but they made contact and the Finn had to make a late pit stop.

Perez's car was also damaged in the incident and he was forced to park his MP4-28 on lap 74.

His antics, though, didn't escape any criticism from Alonso.

"Then with Perez he has the car parked in the Rascasse – that is the only point that you can say.

"He was lucky this year in two or three incidents. In Bahrain nearly contact with Jenson, with me I was off the track avoiding contact. Here at the chicane I avoided contact again, but Kimi was not lucky because he didn't avoid the contact. But only McLaren has to be happy with him."

McLaren driver Perez made a series of aggressive overtaking moves, in one of which he collided with Raikkonen.

Asked if the drivers would talk to Perez, Raikkonen said: "That won't help. Maybe someone should punch him in the face."

Perez said: "Kimi put me straight in the wall at the entry to the corner."