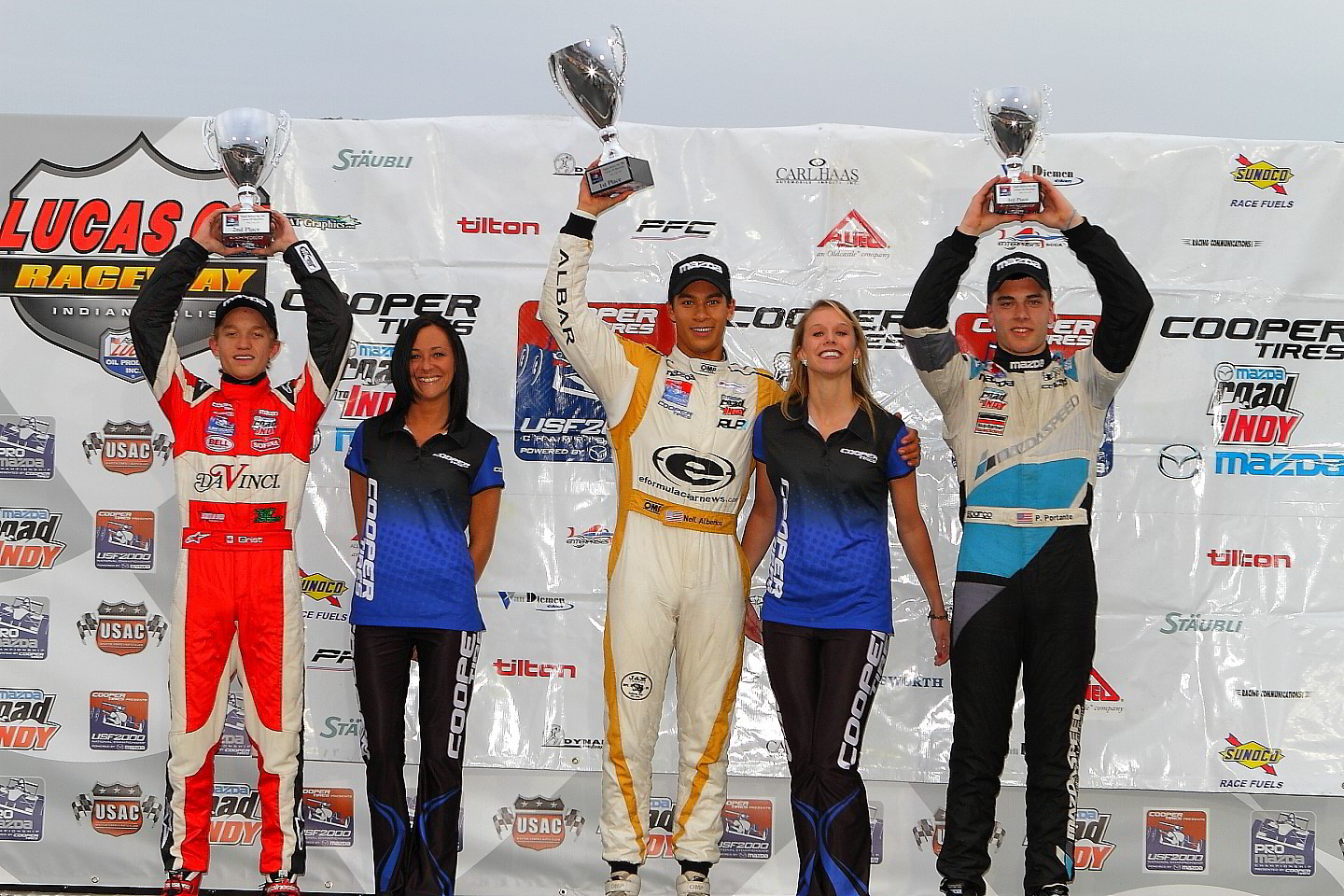 Neil Alberico bounced back from a disappointing pair of Cooper Tires USF2000 Championship Powered by Mazda races in St. Petersburg to score a flag-to-flag victory this evening for Cape Motorsports with Wayne Taylor Racing in the traditional Visit Hendricks County “Night Before the 500" at Lucas Oil Raceway.

Alberico, 20, from Los Gatos, Calif., got the jump on teammate and championship leader Scott Hargrove at the start and held a comfortable margin of over two seconds to his nearest challenger in the 23-car field by the halfway stage in the 75-lap race, which, against the odds, was run entirely under green-flag conditions. It wasn’t to last.

USF2000 rookie Peter Portante, enjoying his best run to date for Belardi Auto Racing, had briefly found a way past Hargrove on the opening lap, but then was obliged to tuck in behind the Canadian. The pair ran in close formation until Lap 42, when Portante finally found a way past Hargrove in heavy traffic. He then swiftly moved onto Alberico’s tail as the leaders worked their way through an intense midfield battle.

Another Canadian, Garett Grist, also was fighting his way into contention for the Andretti Autosport team. Grist, who qualified fifth, lost a place to Wyatt Gooden (Afterburner Autosport) at the start but soon redressed the balance and set his sights on the leaders. On Lap 54, after an extended battle, Grist found a way past Danilo Estrela (Belardi Auto Racing), who had made a spectacular start to vault from eighth to fourth in the opening stages, and by Lap 65 was onto the tail of the two leaders.

The final 10 laps saw an epic fight as the top three battled not only among themselves but also with two other groups of cars that were maneuvering for position with equal intensity.

Grist managed to scrap his way past Portante for second place on Lap 70, and for the remaining five laps gave Alberico all he could handle, but the American held on for an accomplished victory. Grist was just 0.251s adrift at the checkered flag.

Portante, who won a MAZDASPEED scholarship after winning last year’s Skip Barber Racing Championship Shootout, claimed his best finish to date, third, with Estrela in fourth. Hargrove slipped to fifth by the end ahead of Norwegian Henrik Furuseth (PRL Motorsports).

Mr. Consistency, Jason Wolfe, finished seventh for the fourth race in succession for Pabst Racing Services (after placing eighth in the season opener), followed by teammate Dalton Kellett and fellow Canadian Daniel Burkett (Belardi Auto Racing), both of whom secured their best results to date. Another Canadian, Stefan Rzadzinski (JDC MotorSports), completed the top 10 as the first car one lap down to the leaders.

Jesse Lazare of Pabst Racing Services earned the Tilton Hard Charger Award after a gain of 11 positions from 22nd to 11th. Additional awards included the PFC Award to the winning car owners at Cape Motorsports with Wayne Taylor Racing and the Staubli Award to Grist.

Hargrove maintains his points lead over Wyatt Gooden of Afterburner Autosport 144 to 88, with Danilo Estrela of Belardi Auto Racing in third, Grist in fourth and Lazare in fifth. Alberico sits in eighth.

Neil Alberico, #2 Racelite Protection/Bondurant School/eFormulaCarNews.com/J&M Trophies (Cape Motorsports with Wayne Taylor Racing) – First: “The race went great. Obviously we can’t expect anything more than leading flag-to-flag with a victory. We didn’t get the pole but the race is really what matters. I have had such a rough season and it’s been kind of a win or lose for me. I have won every race I have finished, so it is a pretty good record. The Capes have done a great job with the car, and a big thanks to Mazda, Cooper Tires and the series. The Night Before the 500 is always a great event. It was tough in traffic for sure with the whole race distance. We lapped a lot of cars in the field so it was an accordion effect. You catch people, make a gap and catch people. It worked out great. Everyone ran a clean race and being a green flag the whole way through was just awesome."

Garett Grist, #7 DaVinci Foods (Andretti Autosport) – Second: “It was a great race. We started out a bit slow in the beginning and fell back, but as the race went on our car came in and I made changes in my driving to help the handling of the cars. As everyone was falling off, we were gaining speed which made the gap a lot smaller and we were able to go from I think sixth to second in the last half of the race. We were close to getting a win in Turns Three and Four on the last lap on Neil, but I went in deep on him and got a bit sideways and didn’t want to take him out as he led the whole race. I have to thank my team and DaVinci Foods. This is a great result."