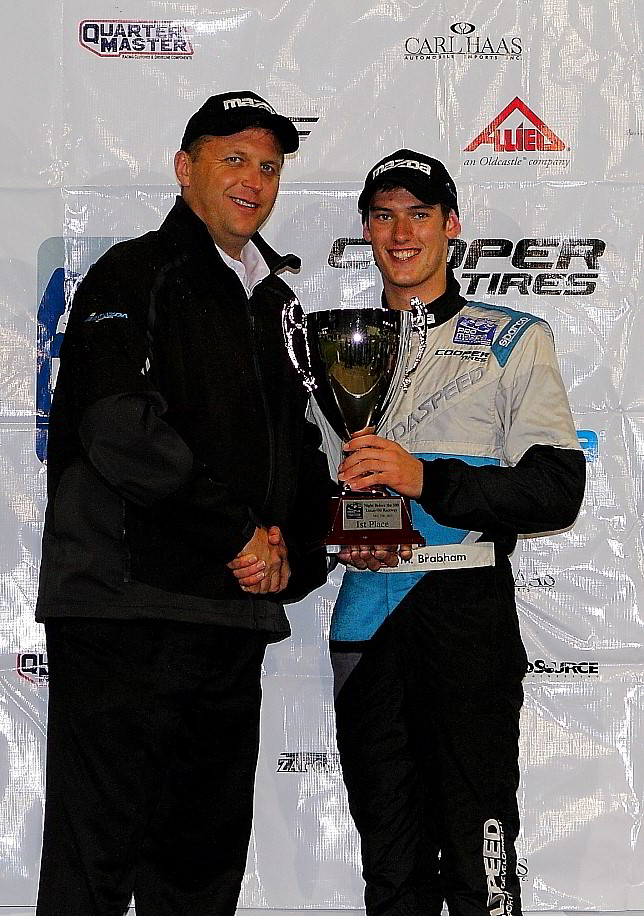 For much of the evening it looked as though the weather might be the big winner in Round 5 of the Pro Mazda Championship Presented by Cooper Tires at Lucas Oil Raceway. Fortunately, the clouds eventually parted and Matthew Brabham took full advantage, romping clear in the delayed and shortened 52-lap race to win the Visit Hendricks County “Night Before the 500" – his fourth victory in succession for Andretti Autosport.

The race began on schedule, but only under yellow flags due to a steady drizzle which soon increased in intensity and brought out the red flags with 11 laps in the books. After over a two-hour delay, the race was restarted at a little after 11:00 pm. Brabham lost no time in stamping his authority on the proceedings at the resumption. He also swept the bonus points for pole, leading most laps and posting the fastest race lap to extend his championship lead to 31 points over Venezuelan Diego Ferreira, who finished sixth for Juncos Racing.

One year ago at the historic 0.686-mile oval, Brabham had to play second fiddle to fellow Floridian Spencer Pigot following a thrilling duel during the Cooper Tires USF2000 Championship Powered by Mazda race. This time, though, after both talented youngsters had stepped up to Pro Mazda, it was Pigot who had to be content with second place.

His Team Pelfrey car was never quite on the same pace as the race leader, and although Pigot charged hard in the early laps – and following a mid-race restart after Colombian Juan Piedrahita (JDC MotorSports) had crashed out of fifth place in Turn Two, thankfully without injury – he steadily slipped farther and farther behind to take the checkered flag 6.009s adrift.

Shelby Blackstock, in a second Andretti Autosport entry, chased Pigot throughout but was never in a position to seriously challenge. Blackstock nevertheless ran another strong race to secure his fourth consecutive podium finish.

Norwegian Anders Krohn, who finished second in the 2010 Star Mazda title-chase, stepped into a second Team Pelfrey car and, despite minimal testing, drove a strong race to fourth after a race-long duel with Scott Anderson (Juncos Racing).

The Quartermaster Hard Charger Award went to Kyle Kaiser of World Speed Motorsports who started 10th and finished seventh. Additional awards included the PFC Award presented to the winning team of Andretti Autosport and the Staubli Award presented to Pigot.

Matthew Brabham, #83 MAZDASPEED/Team Andretti Autosport – First: “It was tough waiting so long before our race. It just builds the nerves and it was just painful waiting and watching the rain come down. I wasn’t sure we were even going to get a race in. It was good we got it in. The car was fantastic and I can’t thank the Andretti crew enough. The car has been great all year. The team has been working really hard and I owe it all to them. The race was a little shortened but there was a restart and Spencer was right there at both the start and restart but I just had the car speed and kept plodding along. The rain started to come down on the last lap and I was kind of taking it easy. I just can’t describe the feeling. It’s great. To come so close last year to winning it and now to finally get the win this year is just awesome."

Spencer Pigot, #81 Doug Mockett & Company/Gap Guard/Parathyroid.com/California Scents/OMP (Team Pelfrey) – Second: “It is good to be back on the podium. We worked hard all throughout practice and kept making improvements to the car. In the end, it was a good result but we’ll go on to Milwaukee and try to go one step better."