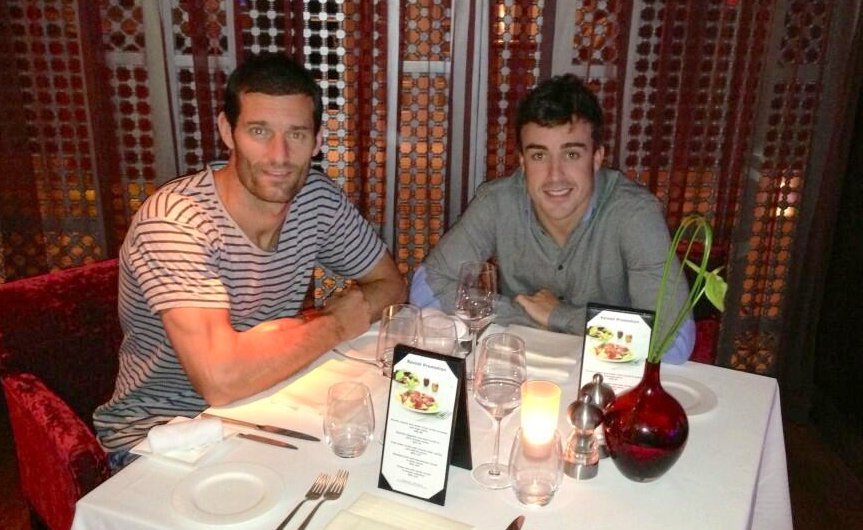 Lowe's tasks not clear yet – Brawn
(GMM) Ross Brawn has admitted he is not sure what tasks new recruit Paddy Lowe will be assigned at Mercedes.

Lowe, McLaren's former technical director, has been extracted from his contract with the great British team six months early, and will start work at Mercedes in just over a week.

His title will be executive director technical, but many see the 51-year-old as the longer-term successor for team boss Brawn.

Asked what Lowe will be doing when he starts work on Monday week, Brawn told German news agency SID: "I honestly don't know yet.

"We will see how he can help us the best both in the short and long term."

"Each will have an area of responsibility and will report to Ross Brawn," chairman Niki Lauda told Brazil's O Estado de S.Paulo.

Asked about the old adage of too many chiefs and not enough Indians, the great Austrian scoffed: "Bullshit."

Briton Hamilton has been outqualified by his teammate and 2013 pole master Nico Rosberg three times on the trot, and many are pointing fingers at the former McLaren driver's new freedom at Mercedes and a dog he walks in the paddock.

"How the hell can a dog be distracting?" Hamilton said in Monaco after qualifying second behind Rosberg.

"I don't really know how I could live my life any differently, so if people have a got a problem with that then that's their problem."

"He should be allowed his freedom to do what the f— he lucks," the plain-talking Austrian told the Mirror.

"If it makes him happy, he will be a better sportsman."

Hamilton said his slight deficit to German Rosberg in the sister silver car at present is just part of his acclimatizing to life at Mercedes, following an entire career with McLaren.

"I can't say I'm doing anything different in the car," he insisted.

"I think it's just because I'm still learning a new car."

And Hamilton said going through a slight dip of performance is not new to him.

"It doesn't hurt," he said. "I've been very fortunate to have lots of experiences like this in the past — with Fernando Alonso, with Heikki Kovalainen and with Jenson Button.

"It doesn't make me doubt my abilities. It just makes me want to work harder."

Team boss Ross Brawn also expects Hamilton to bounce back soon, but he also thinks Rosberg will never be a pushover.

"What I think is that it will be pretty even spread between the two of them — at least I hope that is the case, as we don't want one driver dominating the other," he told F1's official website.

Brawn told Germany's Auto Motor und Sport that it's obvious Rosberg has the upper hand at the moment.

"At this high level, little things play a big role," he explained.

"Nico knows every button in the car and could drive it almost asleep. Lewis is still working on it and we're also learning about him; what he needs from the car.

"He will also get the maximum from the car, but Lewis also knows that he is fighting against an extremely talented teammate," added Brawn.

We reported on Saturday that the Finn was ordered to tape over a tribute to his hero James Hunt because it broke some of the sport's commercial protocols.

But Reuters news agency reports that Bernie Ecclestone's company, FOM, had a change of heart, perhaps after the direct intervention of the F1 chief executive.

"You have to ask FOM or Bernie," Raikkonen said on Saturday. "I don't know the story and I have no interest in going to ask them."

Trulli happy to be out of tire-dominated F1
(GMM) Jarno Trulli insists he has no regrets in the wake of his formula one career.

Two years after his 256-grand prix career ended, the 38-year-old Italian will take in the Monaco grand prix on Sunday — the scene of his one and only race win in 2004.

Asked if he is sorry to no longer be on the grid, Trulli told Italy's La Stampa: "Not a bit.

"Now all you hear is engineers telling the drivers to slow down, to look after the tires, to be careful. This is really formula one?

"I was shouted at only to 'push, push, push'. I'm glad to not be there anymore," he insisted.

In the sister car, Adrian Sutil went all the way through to the top-ten shootout, leaving Scot di Resta furious with Force India.

"The tires were working fine for me, the team failed to bring me in," he told the media afterwards.

He is quoted by the Mirror: "I don't want to say too much because I'll probably say something I shouldn't."

Gary Anderson, a former F1 technical director and now BBC pundit, reacted: "Paul has a habit of pushing it on to the team and he needs to tidy that up a little bit.

"I don't think he should point the finger so easily."

"I would like to apologize because Paul was incredibly quick and we missed our chance," he said.

Most teams struggling to survive – Fernley
(GMM) Bob Fernley, Force India's deputy boss, has admitted the Silverstone based team is in danger of being swallowed up by F1's rising costs.

But, amid reports only Red Bull, McLaren, Ferrari and Mercedes are immune to a worsening situation in the paddock, he insists Force India is not alone.

"Everything we're doing at the moment is about increasing costs," he told the Guardian. "There is no initiative at all about reducing costs.

"If we don't sit down and address it very carefully we're going to lose teams."

The most obvious rising expense facing teams is a huge hike in engine lease fees for the new V6 era, but FIA entry fees are also higher, and new commercial deals have tipped the scales even more in the big teams' favor.

"I think all teams are struggling," said Fernley. "You would be surprised by how high up they (the teams) are."

"I think CVC have done an absolutely awful job. In my view they are the worst thing that has ever happened to formula one," said Force India's Fernley.

Separately, he told Reuters news agency that CVC might be trying deliberately to put smaller teams out of business.

"Are we actually trying to stack it in a way that is to get rid of teams so they can bring customer teams in maybe?" said Fernley.

Indeed, Bernie Ecclestone told the Daily Express newspaper last week that he thinks customer cars would be "a good thing".

"Everybody needs to agree to that but Frank Williams is the one who is against it," said the F1 chief executive.

Fernley confirmed that Force India is also opposed to the idea.

"There are four teams that have been given special privilege and those four teams would be the ones that are likely to supply the customer teams," he said.

"So everything is now moving in the way of the four teams."

Sauber quiet after sponsor meetings in Moscow
(GMM) Sauber boss Monisha Kaltenborn was tight-lipped when asked about her visit to Moscow just prior to this weekend's Monaco grand prix.

Kaltenborn, and team founder Peter Sauber, were not in Monaco on Thursday as the practice action kicked off, with Blick newspaper reporting that they were instead looking for sponsors and partners in eastern Europe.

The Swiss newspaper now reveals that Kaltenborn and Sauber were in the Russian capital.

"We had an important meeting," was all she would tell veteran correspondent Roger Benoit.

Asked, however, if Sauber is now ready to run some new sponsor logos on the C32 car, Kaltenborn insisted: "No!"

The world champion's 53-year-old dad had been missing from the paddock for so long that some suspected his son, Red Bull driver Vettel, had banned him from attending.

"There's nothing to it," 25-year-old Vettel's spokeswoman Britta Roeske insisted to the Kolner Express newspaper.

Indeed, this weekend in Monaco, Norbert is back.

Why the long absence? "I had an operation on my right hand," said the Heppenheimer.

"It was a great handicap, since you don't realize the impact when you can't use a body part. I felt like I was disabled," he smiled.

On Saturday, his son qualified behind the Mercedes cars.

Norbert Vettel said: "The only thing that matters is who stands with the prince on Sunday."

Webber not ruling out Ferrari move
(GMM) Mark Webber has ruled out continuing his F1 career with a "small team" — but he's leaving the door open to Ferrari.

In the wake of the 'Multi-21' team orders saga, in which his relationship with Sebastian Vettel hit an all-time low, the 36-year-old Australian was photographed out for dinner with his friend Fernando Alonso.

"Well, Fernando and I have often had dinner together since 2001, but Twitter wasn't invented then," Webber told the Spanish newspaper El Pais.

"I've also posted pictures with Jenson and with others, but when it was Fernando, everyone said 'Oh my god!' That's what the press does."

But, with Red Bull not ruling out pairing Vettel with his friend Kimi Raikkonen next year, does Webber rule out joining his friend, Spaniard Alonso, at Ferrari in 2014?

"In F1 you can never say never," Webber answered, "but right now my commitment to Red Bull is solid — we've been through some very good moments together.

"I've always said I would not go back to a small team," he insisted.

The news, announced in Monaco by Renault president Carlos Ghosn, means both of Red Bull's F1 teams will be powered by the French marque's V6 engines in 2014 and beyond.

Mercedes refuses to ponder team orders
Ross Brawn says his Mercedes team will not deploy team orders during the Monaco Grand Prix. Nico Rosberg starts the 78-lap outing from pole-position, with Lewis Hamilton sharing the front row, but both men have been told they are free to race.

When asked if the pole-sitter is to be given a preference in the race, Brawn replied: "If that was the case then we should have discussed that before practice. We didn't, so there are no team orders here. They can race each other here in Monaco."

Brawn added: "We'll let the race run and see how it develops. It is our ambition to get a 1-2 finish and we need to be sensible to try and achieve that. We can expect drivers racing nose to tail so I hope we can get a better result than in Spain."

At the Spanish Grand Prix earlier this month, Rosberg and Hamilton dropped from first and second to sixth and 12th respectively, having struggled with tire degradation.