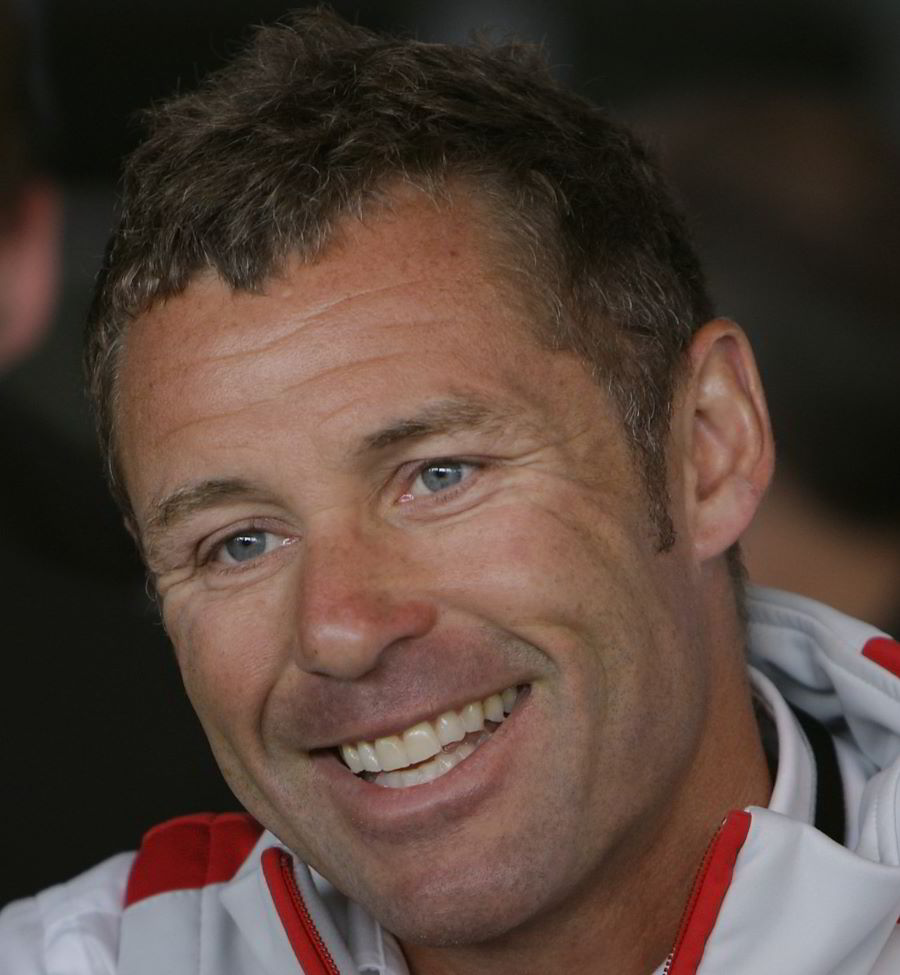 McLaren 'did deal' for Lowe's Mercedes release – media
(GMM) Mercedes made a deal with McLaren to secure Paddy Lowe's early release, according to reports in the British media.

On Monday, the F1 team Mercedes announced that Briton Lowe will start work as executive technical director early next month.

That is a full half-year before Lowe's contract with McLaren – where he has been serving 'gardening leave' from his long-term technical director duties – was due to expire.

Mercedes confirmed only that "agreement has been reached" for Lowe, 51, to start on June 3.

"There was no comment from McLaren," said Mirror correspondent Byron Young, "but the suggestion is that the move could not have been made without their agreement."

The Sun's Chris Hockley agreed that Mercedes and McLaren "have done a deal".

On his F1 blog, Allen said Mercedes is "very unhappy" about the turbo V6 data that could flow to Honda next year, "so it appears they have leveraged this situation to trigger the early release of Lowe".

But the German newspaper Die Welt said Mercedes would also have had to pay "a handsome fee" to McLaren for Lowe's release.

"This is speculation, and we don't comment on that," a Mercedes spokesman said.

Whatever the case, Mercedes is happy to have Lowe on board.

"Paddy is undoubtedly a great gain for us. And it's very gratifying that he joins us so soon."

Valencia wants lower fee for F1 return
(GMM) Valencia is hoping to negotiate a new fee and then agree to annually alternate a spot on the formula one calendar with Spanish grand prix host Barcelona.

Whether the Spanish cities will ultimately share just one Spanish date on future grand prix calendars is a long-running saga, but the latest reports indicate talks are still ongoing.

Barcelona officials played down the likelihood of a deal when it hosted its race at the Circuit de Catalunya earlier this month.

But Valencia's regional government, the Valencian generalitat, said through its vice president Jose Ciscar: "We are negotiating a discount for it (the F1 race).

"When it is closed, I believe that we can sign the contract between the three parties," he told the Spanish news agency EFE, referring to Valencia, Barcelona and F1's Bernie Ecclestone.

"When we can announce that the deal is done, it will be announced."

When the talented 25-year-old made the curious and apparently sideways step from Force India to Sauber for 2013, many sensed a 'Ferrari factor'.

Indeed, while Force India uses Mercedes power, the Swiss team Sauber is a customer and close political ally of Ferrari.

Following the German's move, Ferrari president Luca di Montezemolo said: "I am very curious to see how Hulkenberg goes with our engine at Sauber".

The start of Hulkenberg's Ferrari-powered career has been mixed: he has thoroughly outshone Esteban Gutierrez in the sister car and won Sauber's praise.

On the other hand, the C32 car is struggling.

Asked if that's what he expected when he moved from Force India, Hulkenberg smiled to Spain's El Confidencial: "No.

"We are behind where we expected, and not producing the results we wanted."

As for whether his road towards Ferrari is on course, Hulkenberg admitted: "I don't know — you'll have to ask them.

"These are the early days of the season, but I do want to get back to winning races and challenging, and to be champion one day.

"To do that you have to be in a big team. The future is open and you have to do the best you can with the car you have every weekend," he added.

Hulkenberg, a rare commodity in the F1 paddock in that he is a midfield driver without considerable sponsorship backing, has had a stop-start F1 career so far.

He made an impressive debut in 2010, scoring pole position at the season finale, but was immediately dropped by Williams.

He sat on the reserve bench with Force India the following year, returning to the grid in 2012.

"Three teams in three years, many changes … more than I would like," Hulkenberg smiled again.

"What happened with Williams was frustrating — there was no discussion, I was out. You do a good season and lose the seat for other reasons.

"In any case, it's in the past and everyone's race (F1 career) is different — mine with many changes."

Kristensen gets Steward role for Monaco
Tom Kristensen will act as the driver representative steward for the Monaco Grand Prix. The Dane, who is the most successful driver in the history of the Le Mans 24 Hours, last held the role at the championship-deciding Brazilian Grand Prix in 2012.

Although Kristensen has never contested a Formula 1 race, he tested the Minardi M198 ahead of the 1998 season, a car raced by Shinji Nakano and Esteban Tuero.

Single DRS zone for Monaco GP
As expected, just one DRS zone will be in place for the 2013 Monaco Grand Prix, with governing body the FIA choosing to retain the area along the start-finish straight.

The detection point has been placed between Turns 16 and 17, while the activation marker comes on the exit of the final corner (Turn 19) for the run to St. Devote.

For the opening five Grands Prix of the season, two DRS areas had been elected, but the restricted nature of the Monte-Carlo street circuit limits the FIA to just one zone.

Pirelli predicts two pit-stops in Monaco
Formula 1 tire supplier Pirelli is expecting an average of two pit-stops per driver at this weekend's Monaco Grand Prix, with the company's Motorsport Director, Paul Hembery, stating that degradation levels will be much lower than recently witnessed.

At the Circuit de Catalunya last time out, the majority of the field – including race winner Fernando Alonso – completed four pit-stops, but Hembery believes this figure will be significantly reduced based on previous experience on the streets of Monte-Carlo.

"In Monaco we’d expect an average of two pit stops per car, because in complete contrast to Barcelona, Monaco has very low tire wear and degradation," explained Hembery. "This doesn’t make the race any less strategic however, as in the past we have seen drivers trying completely different strategies yet ending up very close to each other at the finish.

"The last race in Spain was won from lower down on the grid than it has ever been won before, so it will be interesting to see if this pattern can repeat itself in Monaco: a track that is renowned for being difficult to overtake on. Because of this, strategy will become even more important than usual, with teams trying to use tactics to improve on their starting positions."

In 2012, Mark Webber won the Monaco Grand Prix for Red Bull on a one-stop strategy, with only five drivers making two visits to the pit lane over the course of 78 laps.

Schumacher and Rosberg at the Nordschleife
Michael met up with Nico, Bernd Schneider, Bernd Maylander, and Karl Wendlinger to drive some pretty cool Mercedes-AMG cars around the Nordschleife!

And to mark the occasion, Renault Sport brings you this mini-story. It puts you in the shoes of a famous secret agent, who, at the wheel of the sleek and sporty Megane Renaultsport Red Bull Racing RB8, discovers the driving sensations of the less 'civilized' Infiniti Red Bull Racing RB7.

Losing McLaren as customer not ideal for Mercedes
Toto Wolff has admitted Mercedes is disappointed with long time partner McLaren's move to link up with works Honda engines in 2015.

Formerly McLaren's works engine partner, Mercedes set up its own F1 team a few years ago, leaving the great British outfit with the prospect of a customer engine bill.

But that will end after 2014, when Japanese carmaker Honda returns to F1 after a six-year absence, rekindling its famous and highly-successful partnership of the 80s and 90s with McLaren.

Mercedes, albeit focused on its Brackley based works squad but still supplying customers McLaren and Force India, admitted it is disappointed to lose a great partner.

"It is of course not ideal when you lose a customer, especially when it's someone like McLaren, who have been with Mercedes for so long and celebrated great successes with us," motor sport director Wolff told Speed Week.

"So of course it's unpleasant, but it's a decision they've taken. We also look forward to having another competitor in F1 — Honda is a top brand and, as the saying goes, competition is good for business," the Austrian added.

Wolff said Mercedes is not worried its only other current customer engine partner, Force India, could also jump ship to Honda.

"No, because everyone has only a limited ability to supply customer teams.

"For us, it's somewhere between three and four teams, and we're confident that in the coming years we will have at least three (Mercedes-powered) teams in formula one," he said.

That implies that Mercedes is now looking for a replacement for McLaren beyond 2014. Grandprix.com