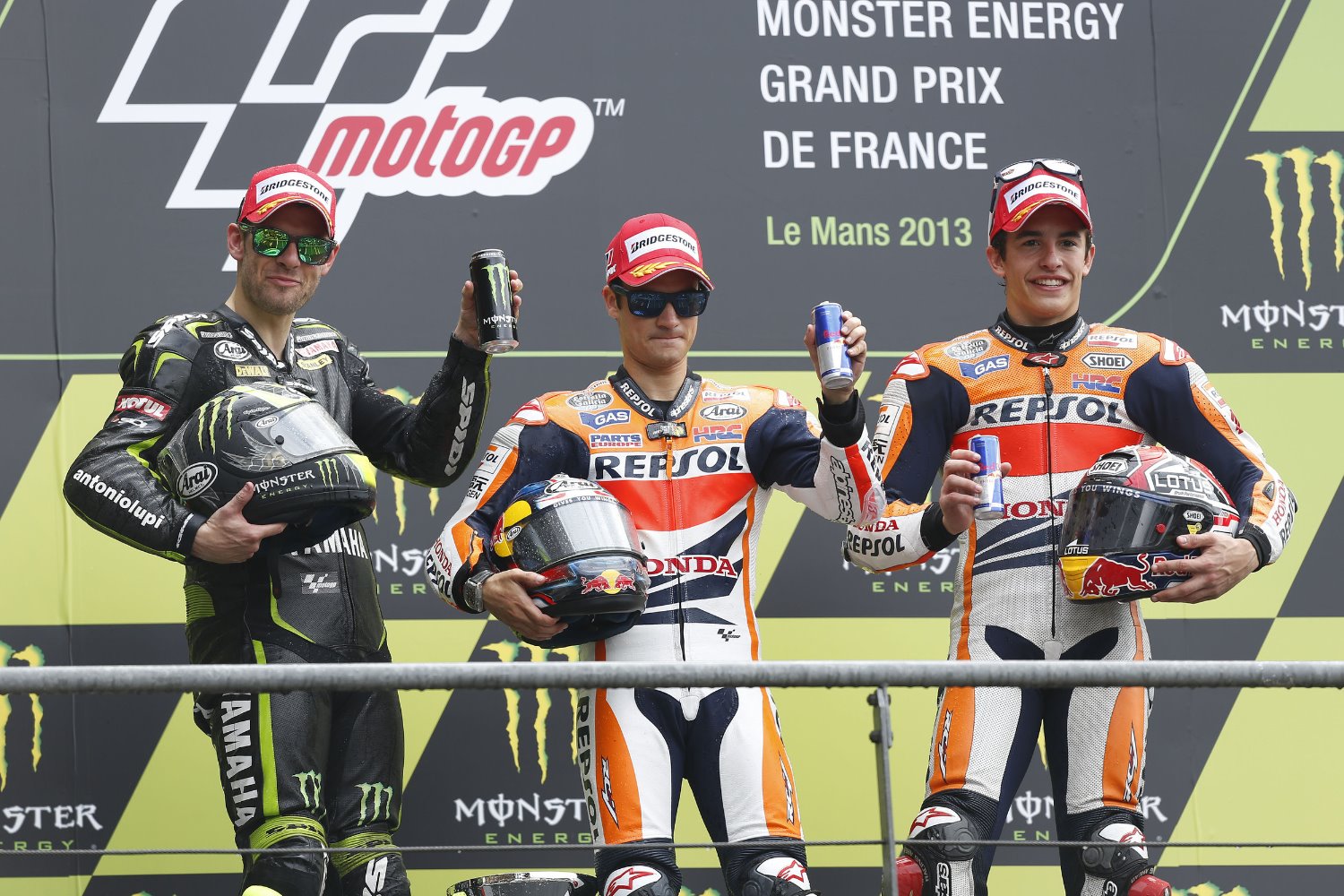 Dani Pedrosa has become the first rider to win two races in the 2013 MotoGP season, coming from sixth position on the grid in mixed conditions at Le Mans. He now leads the championship from Repsol Honda Team partner Marc Marquez, who fought to the podium after a poor start as Britain’s Cal Crutchlow finished second.

For the second year in succession, the field was presented with a wet track for the start of the Monster Energy Grand Prix de France. All competitors duly elected to fit the Soft compound wet weather tires for both front and rear wheels, although this resulted in an extremely difficult final handful of laps as the tarmac dried out.

Pedrosa’s ride to a first victory at Le Mans in the premier class was a calculated but exciting one. Having crashed in qualifying, he stayed out of trouble at the start and passed Yamaha Factory Racing’s Jorge Lorenzo. The Honda rider then caught Ducati Team’s Andrea Dovizioso, who had fought into the lead from a front row start and continually re-passed Pedrosa whenever the latter made a mistake. The final swapping of places came at half distance.

The weekend has been a memorable one for Crutchlow. On Saturday the Englishman sustained a fracture to the top of his shin bone, causing immense pain in the knee, but from fourth on the grid he made the most of the mixed conditions and stormed passed old teammate Dovizioso in the closing stages. The Ducati rider led for a chunk of the race and ultimately just missed out on a rostrum result as Marquez – championship leader heading into the day – fought back from a poor getaway and a selection of off-track moments. He therefore maintains his 100% podium finish record for 2013.

Nicky Hayden confirmed Ducati’s strongest day of the campaign to date by finishing fifth from GO&FUN Honda Gresini’s Alvaro Bautista, but it was a somewhat disastrous afternoon for Yamaha Factory Racing. Lorenzo struggled to make an impression and slid down the order to seventh, whereas Valentino Rossi – who had previously battled with his teammate – fell while under pressure from Hayden. The Italian recovered to 12th behind Pramac Racing’s Andrea Iannone, whose temporary teammate Michele Pirro rose to eighth ahead of Tech 3’s Bradley Smith.

Pedrosa’s fourth win in France across the three classes makes him the championship leader, as the 2012 runner-up is now up to 83 points and six ahead of teammate Marquez. Honda leads the Constructors’ Championship from Yamaha by 14 points, with Repsol Honda Team now 47 ahead of Yamaha Factory Racing for Teams’ honors. The battle will continue at Mugello in Italy on 2nd June.