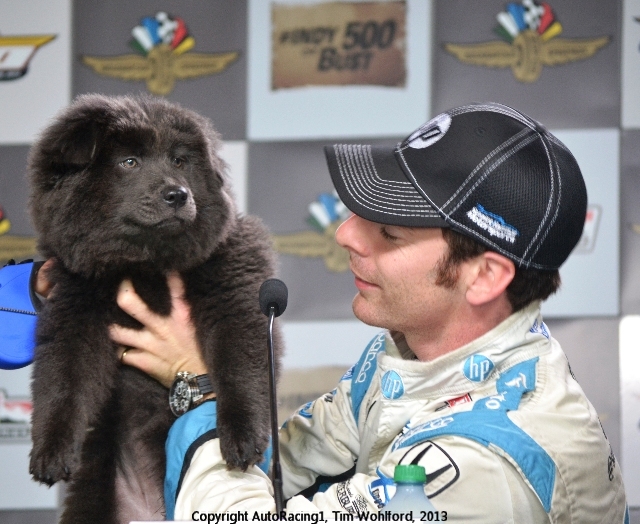 The track is drying at Indy. So far, no word on the legendary "weepers" that usually hold things up. Officials are whispering a possible start time to qualifications of 1:30 to 2:00. The current weather pattern has rain cells popping up and disappearing without going to many places in the process.

There is a rumor that Katherine Legge showed up with a bit of money and is looking to put together a ride for the Indy 500. Sam Schmidt hasn’t exactly kept the extra car hidden during the week, and several drivers have been rumored to be working to get that ride. This would mean that we'd have a meaningful Bump Day, instead of the set of parade laps we're gonna get if there is no bumping. And of course, it would be complete, uh, justice? if she bumped out one of the Dragon cars.

Simeon Pagenaud told me that he has stumbled on the perfect formula for scorin' the dates — a single IndyCar driver with a French accent with a cute dog. Simeon has being doing work with the local (Indy) Human Society, and has been often seen with a very cute Chow puppy. The dog is a definite chick magnet. Be forewarned — the chow will shed, and presumably, so will a hairy Frenchman.