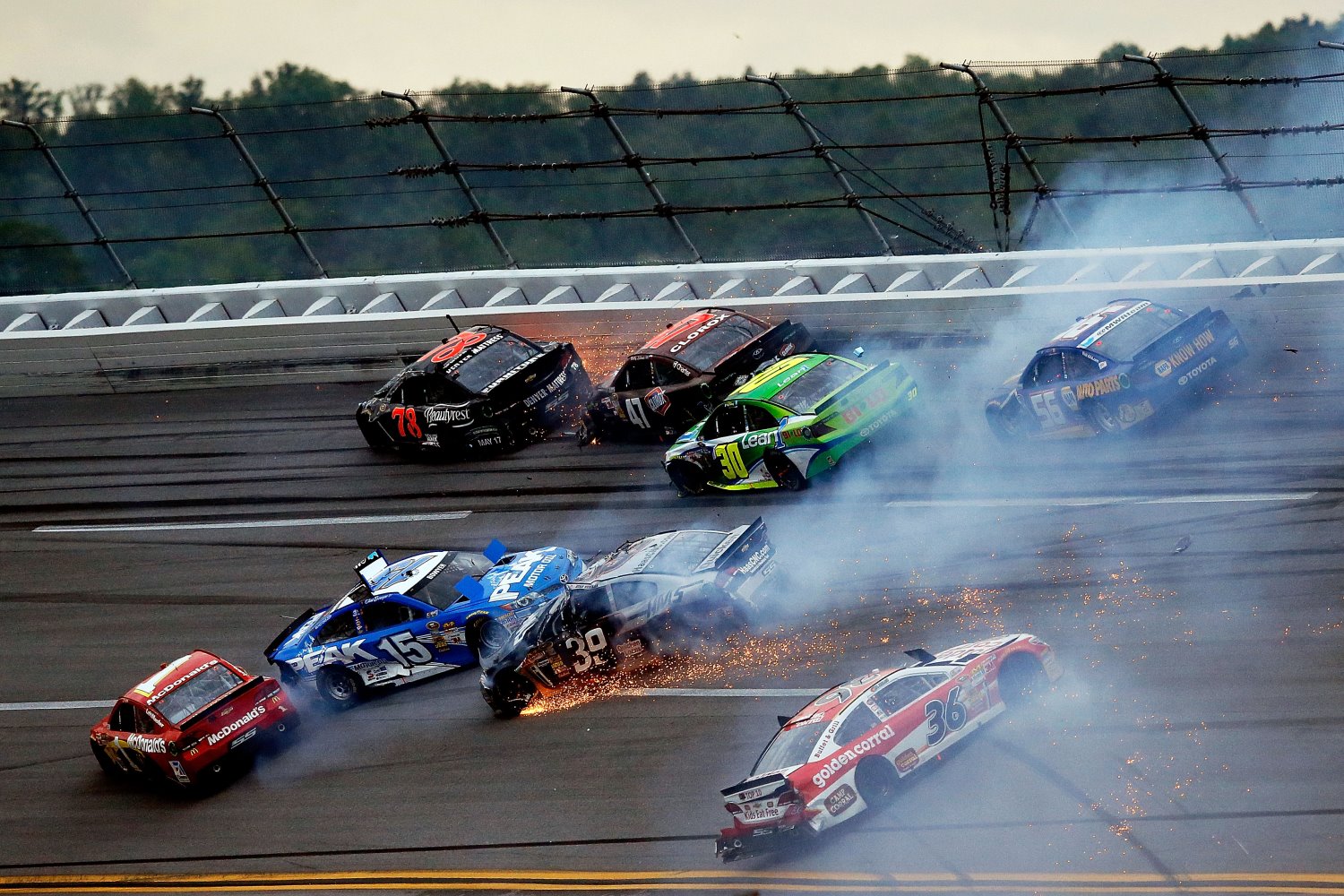 05/07/13 NASCAR will likely review comments made by Stewart-Haas Racing driver Ryan Newman following a Lap 183 crash in Sunday's rain-marred Sprint Cup race at Talladega Superspeedway. Any potential fine that could come from the comments likely would be made on Tuesday or Wednesday, per NASCAR's history. Earlier, it was reported that NASCAR would definitely review his comments, but a spokesperson clarified that there are a variety of things that will be reviewed over the course of a race weekend.

Newman finished 32nd after the crash in which Kurt Busch's car barrel-rolled and landed upside down on the hood of the #39 car Newman had in position for a top-10 finish or win with five laps left in regulation as darkness approached. NASCAR fined Denny Hamlin $25,000 earlier this year for perceived negative comments about the new "Gen 6" car and the quality of racing at Phoenix International Raceway. ESPN

Ryan Newman was highly critical of NASCAR for restarting yesterday's Talladega Aarons 499 Sprint Cup race in darkness and on a track that was slick with light rain.

After the race Newman came to talk to reporters, and he was fuming.

"I am doing this interview to let everybody know I'm alright. They [NASCAR] can build safer race cars, they can build safer walls. But they [NASCAR] can't get their heads out of their asses far enough to keep them on the race track, and that's pretty disappointing. I wanted to make sure I get that point across.

What others had to say

KURT BUSCH, NO. 78 FURNITURE ROW RACING CHEVROLET SS FINISHED 30TH AFTER BEING INVOLVED IN A MULTI-CAR ACCIDENT ON LAP 183

"We just got hit from behind, and along for the ride we went."

"My car was really bad on the bottom all day long, so I just stayed to the outside. Everyone kept getting jammed up in the middle. I could carry a ton of momentum, and pushed the No. 51 (Reagan Smith) to the lead there. Thought I was going to take the lead there myself down the back straightaway. I just kind of stalled out there from a side draft from Reagan, and the No. 17 (Ricky Stenhouse) thought he could stick it on the outside there, and there wasn't enough room. He hit me in the right rear, and got me lose, and sent me back across the field. Very disappointing. I definitely thought we had at least a shot at a top-five, but we were definitely going for the win."

THE DANICA PATRICK, NO. 10 GODADDY.COM CHEVROLET SS FINISHED 33RD AFTER BEING INVOLVED IN A MULTI-CAR ACCIDENT ON LAP 183
WHAT HAPPENED FROM WHERE YOU WERE?

"I'm probably sure the most common answer is 'I have no idea'. It happens out here; it is frustrating. I know this is plate racing, but…I'm watching the replay right now, so let me see what happened here. I was running the middle lane…yes, yes…that's about what I saw. Ricky (Stenhouse, Jr.) was trying to make it four wide, and the No. 36 (JJ Yeley) came up to block him, and it turned him. Then the No. 78 (Kurt Busch) was spinning, I went high. and somebody came up and clipped me and put me in the wall. I'm not sure which car it was. The No. 32 (Terry Labonte) it looked like. Honestly, it is just the way it goes. People forcing the issue. It is late in the race, I get it. But that's what causes these accidents that makes speedway racing speedway racing."