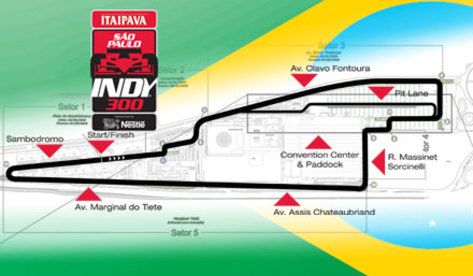 Tony Cotman won't be surprised if the track record falls on the streets of Sao Paulo during qualifications for the Itaipava Sao Paulo Indy 300.

A modification to Turns 1 and 2 of the 2.536-mile street circuit was made with the goal of maximizing passing opportunities for the drivers. It will also give them a chance to post faster lap times.

"The biggest change is that we've moved the curbing in Turn 1 and 2, particularly in Turn 2, where they have been moved quite a bit to the driver's right," said circuit designer Tony Cotman, whose NZR Consulting is responsible for the track build.

"(Turn 2 is) about 10 feet wider now and the curbs that are there have been lowered, so the corner will be quicker, without question. The goal was to help improve things for double-file restarts and particularly in the rain. We've seen how difficult it can be over the years."

The widening of the corner will allow cars to race side-by-side as they come off the concrete portion of the Sambadrome and into complex known as the "S" of Samba.

"The corner will still be painted, and there still will tires behind the apexes," Cotman said. "The difficulty for the drivers is they can't see the curbs or the corner, especially when you are right behind another car. We'll give them a reference point by painting the tires a contrasting color. Hopefully we've improved it."

Cotman also said there has been some smoothening of bumps, particularly in Turn 10, as well as some addressing drainage issues that led to puddling.

"We've addressed the key bumps, but just because a bump has been addressed in a certain corner, doesn't mean more bumps won't be found," Cotman said. "It's a street circuit, so there always will be bumps, but our goal is to improve them."