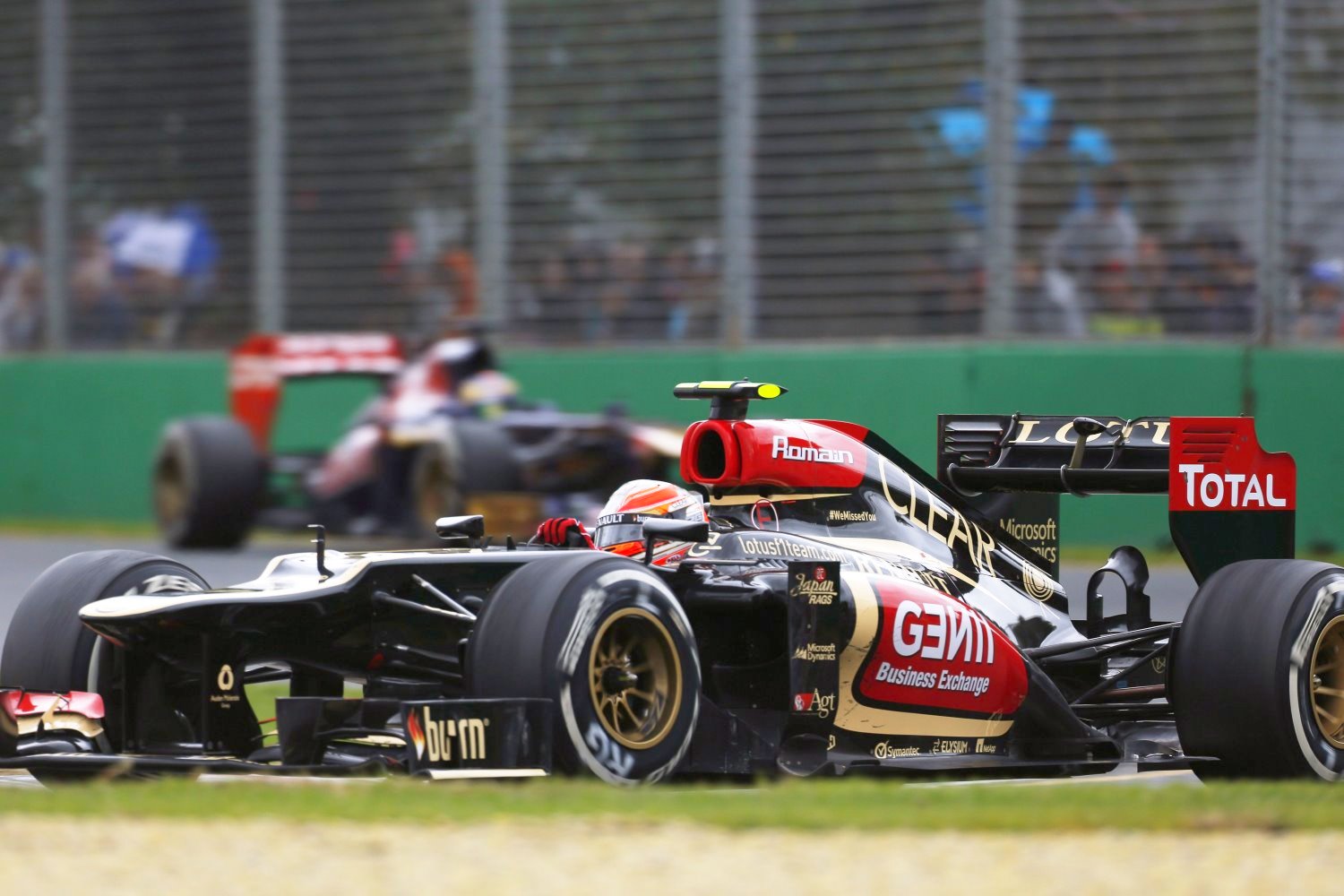 Grosjean hopes new chassis ends 2013 struggle
(GMM) After a low-key start to the 2013 season, Romain Grosjean is using a new Lotus chassis this weekend in Bahrain.

The Frenchman, although no longer derisively referred to as the 'first lap nutcase', has struggled for pace so far this year as teammate Kimi Raikkonen troubles the very top of the world championship.

Grosjean, 27, has insisted he sensed a fundamental problem with his black and red E21, and so team boss Eric Boullier ordered a new one be built up for him for Bahrain and beyond.

Asked if the car or Grosjean's confidence is the real problem, Boullier said in Bahrain: "It's a whole package. We try to find out.

"He's not as his best, let's say, where we think he should be.

"There's nothing to blame, actually to finger-point anything, it's just the addition of different things."

Another theory is that Finn Raikkonen, the 2007 world champion who spent 2010 and 2011 away from formula one in rallying and Nascar, has simply stepped up a notch into unprecedented form.

Asked to explain the difference between Raikkonen's 49 points versus Grosjean's 11 so far in 2013, Boullier told F1's official website: "Most of it comes from the fact that Kimi's speed has improved even further from last year.

"And Romain is struggling a bit with the 2013 tires, to take the best out of them in one lap and on the long runs."

On Friday in Bahrain, even with Grosjean now in a new chassis, Raikkonen was consistently a few tenths faster in the practice sessions — and indeed fastest of all.

Grosjean told France's RMC Sport: "We decided to change the chassis to remove all the doubts.

"But, really, we don't know what the problem is and why I can't use these tires properly. The team has asked me to drive slower but I've already been driving like my grandmother.

"To be honest, the only thing that can explain what is happening is my driving style.

"For sure it's not easy on the mental side, but I still know what I'm capable of and that I'm not suddenly a second slower than Raikkonen."

Ferrari seat possible for Bianchi – Domenicali
(GMM) Stefano Domenicali is not ruling out a future Ferrari seat for Jules Bianchi — but it probably won't happen in 2014.

Following rookie Bianchi's impressive start to his F1 career this year with Marussia, Ferrari boss Domenicali admitted this week he can imagine seeing the young Frenchman move on to "other teams".

Bianchi, 23, is the cream of Ferrari's driver development 'academy'.

"I am very happy," Italian Domenicali told France's RMC Sport, "because Jules has done three perfect races and I hope he keeps going like that.

"I think he has a bright future in formula one," he said in Bahrain.

Asked if a Ferrari race seat could be an option for Bianchi, Domenicali added: "I don't know about next year, but in the future, yes of course."

Amid suggestions Webber's place alongside Sebastian Vettel is now untenable in the wake of the 'Multi-21' affair, the 36-year-old Australian has been linked with a move to Le Mans with Porsche.

"People are putting two and two together and getting a bit more than they should," the driver told the BBC in Bahrain.

Still, Kimi Raikkonen is being strongly linked with Webber's race seat for 2014.

But Marko, Red Bull's driver manager who is famously much closer to German Vettel, told Kleine Zeitung newspaper in Bahrain: "It's April — the fourth race.

"We traditionally make driver decisions in the summer. Everything else is just rumors."

Team boss Christian Horner, who co-owns a GP3 team with Webber, insisted the 'Multi-21' affair doesn't necessarily mean Webber and Vettel need to be broken up.

"They've never really got on but they push each other, they're competitive and it's worked," he said.

"Before changing anything I want to see how things settle down and how we move forward."

Pirelli denies 2014 deal 'all done'
(GMM) Paul Hembery has in Bahrain denied Bernie Ecclestone's claim that a new deal for Pirelli is "all done" for 2014.

The Italian marque's initial three-year contract is up at the end of the season, and motor sport boss Hembery has said his Pirelli chiefs are nervous about the delay over a new deal.

F1 chief executive Ecclestone told journalists in Bahrain on Friday, however, that "from our side it (a 2014 deal) is all done".

"Well, it's all done then from his side," Hembery laughed, denying the interpretation of Ecclestone's comments.

"It's ongoing," he insisted.

Hembery hinted that Pirelli needs the terms of the new deal to reflect "what's going on in the European automotive business in particular".

"Sales were ten per cent down in March in the overall market," he said. "That impacts heavily on us and we're currently having to make action plans to address those challenges."

Another factor weighing on the decision could be the loud and often harsh criticism of Pirelli's heavily-degrading 2013 tires, which the company has argued were only produced because F1 bosses wanted to spice up the sport.

But Rubens Barrichello, in Bahrain as a commentator for Brazilian television Globo, backed the decision to use F1 tires for entertainment value.

"They made a choice," he told O Estado de S.Paulo newspaper.

"You could say the races are less technical, but they are undeniably more exciting and unpredictable."

McLaren denies 'throwing' Hamilton out of pits
(GMM) McLaren has denied Lewis Hamilton's claim the team "threw" him out of its pit garage at a pre-season Jerez test.

Recalling his effort to stay in touch with his former team, Hamilton revealed that he walked into the McLaren pits in February and "Sam Michael threw me out".

"That wasn't very positive and I don't feel very good about that," said the 2008 world champion.

McLaren spokesman Matt Bishop, however, said Hamilton's depiction of the incident is exaggerated.

"Sam didn't throw Lewis out of our garage," he is quoted by the Sun newspaper.

"Rather, he gently guided him out, since our car was being worked on by our mechanics at the time, with a number of its dismantled components clearly visible, which no one from a rival team should see.

"Lewis knew he shouldn't have been in our garage in the first place, just as all team personnel know they shouldn't enter rival teams' garages," added Bishop.

He claims Hamilton has been "warmly welcomed" when he visits McLaren's hospitality areas, leading team boss Martin Whitmarsh to describe the reports of Michael throwing him out as a "storm in a teacup".

Whitmarsh told the Independent: "I would never consider going into Ferrari's garage even though I have a very good relationship with team boss Stefano Domenicali.

"I suspect if I did that I would politely be asked to leave.

"I think Lewis was asked to leave in a good-natured manner in Jerez, and (he) may have been slightly naive.

"But he is always welcome in our hospitality and other appropriate areas."

Lauda, the F1 legend and now Mercedes chairman and co-owner, enticed Lewis Hamilton to switch camps from McLaren over the winter.

And now he thinks Red Bull would be wise to snap up Finn Raikkonen.

The 2007 world champion had a solid return from world rallying and Nascar last year, and so far in 2013 is a mere 3 points from leading the drivers' standings.

Red Bull's Dr Helmut Marko, and even team owner Dietrich Mateschitz, have already declared their interest, as Mark Webber's contract runs out and the Australian is linked with Porsche's 2014 Le Mans foray.

"It is not the question of how I am going to keep him (Raikkonen)," Lotus' Eric Boullier told F1's official website, "it is a question of does he want to stay?"

Understandably, Boullier admitted he thinks the 33-year-old would be unwise to swap his comfortable situation at Lotus "to race against Vettel at Red Bull".

But Lauda thinks the inimitable Finn should be Red Bull's target.

"He is sensational, a cool guy, and absolutely on the level of Vettel, Alonso and Hamilton," the triple world champion told Germany's Bild newspaper.

"Kimi is definitely a title contender.

"If I was Red Bull and I wanted to change something with the drivers, then I would definitely go for Kimi.

"He is the best driver on the market by far."

Hamilton, who ended the session in fifth position, suffered a failure at the left-rear of his car after the checkered flag had fallen. After the 2008 World Champion crawled back to the pits, mechanics inspected the car and took the decision to switch the unit.

As per the regulations, drivers may use no more than one gearbox for five consecutive race weekends. As this was only the fourth round of the season, governing body the FIA will demote Hamilton five places from wherever he qualifies later today.

Esteban Gutierrez and Mark Webber also approach qualifying with grid penalties, issued at Shanghai. Gutierrez will drop five positions due to an incident with Sutil, while Webber loses three places for tapping Jean-Eric Vergne into a spin.

Webber satisfied with damage limitation
Despite admitting that he had hoped to extract more performance in qualifying, Red Bull driver Mark Webber was left feeling satisfied by limiting the damage of his three-place grid penalty for Sunday afternoon's Bahrain Grand Prix to the fourth row.

The Australian finished fifth fastest in Q3, meaning he would normally drop to eighth, but he has gained one position back following Lewis Hamilton's gearbox change.

"I would have like to have got a bit more out of the car and been a bit further up, but seventh with a penalty isn’t the end of the world," explained Webber. "We have a different tire strategy to some of the others and it’s a long race, so let’s see how we go. I’m proud to be starting my 200th Grand Prix tomorrow.

"I have had some incredible highs and some tough lows, but that’s top line sport. I have learned a huge amount during that time, about myself and life in general, and the drive is still very strong for the sport; I still enjoy it a lot. It’s another number, but it would be good to get a good result to mark it."

Raikkonen: Not fast enough for pole
Kimi Raikkonen says his disappointing performance in qualifying after topping Friday's practice session was all the car was capable of.

"It wasn’t the easiest qualifying session after a weekend which hasn’t been the easiest so far either.

"Yesterday it was difficult at times to find the balance with the car and I found that again today.

"This morning it felt good and we didn’t do too bad in free practice, but we didn’t quite get it right this afternoon. My lap wasn’t great, but it’s a long race so we’ll just have to see what we can do tomorrow."