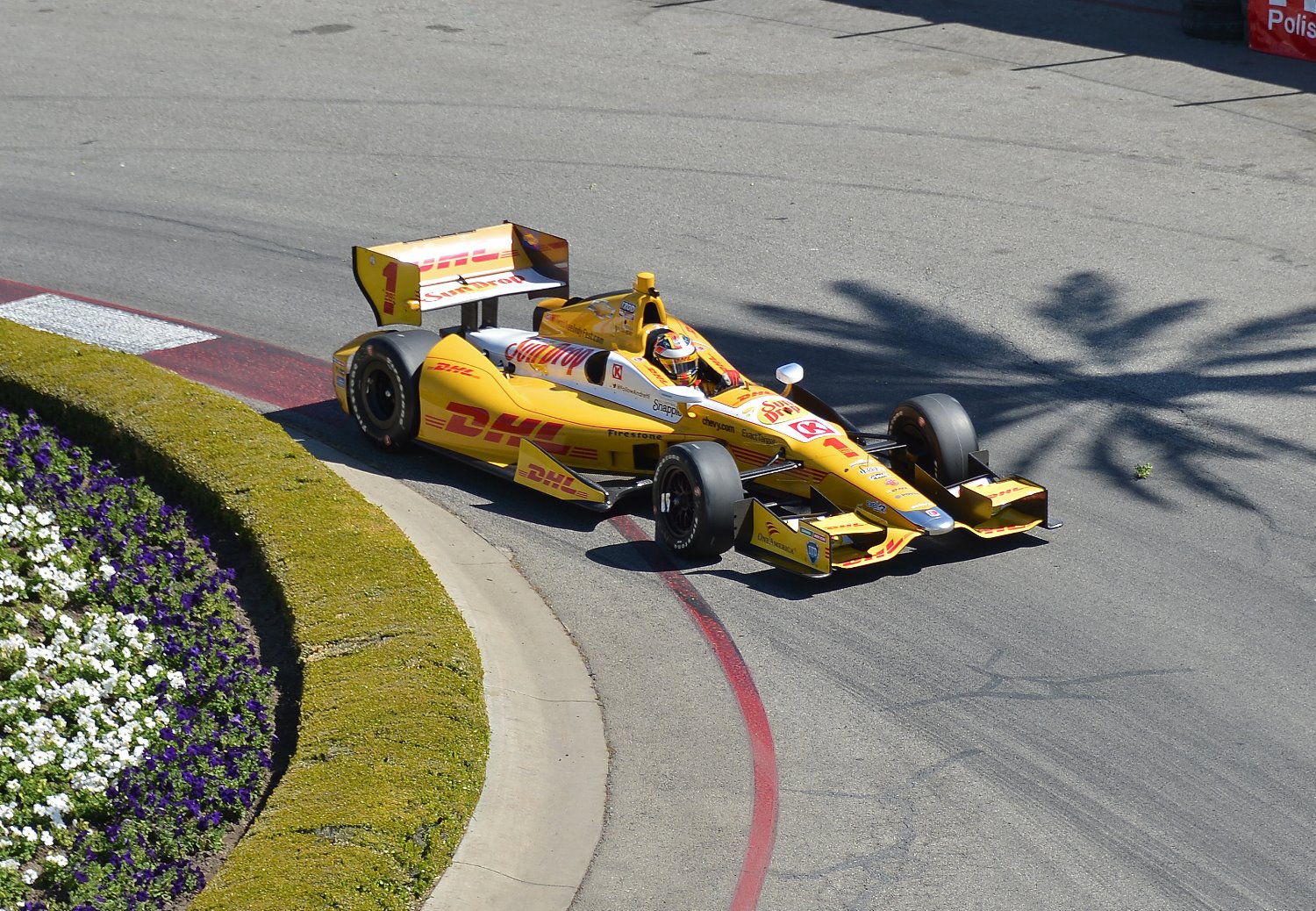 Other notables were James Jakes in 6th while AJ Allmendinger and Graham Rahal struggled in 19th and 27th respectively, but Rahal had bad luck and only completed 5 laps and they were all in and out laps every time the red flag flew.

The session was interrupted numerous times for accidents and spins involving drivers like Justin Wilson, Simona de Silvestro, EJ Viso and others.

RYAN HUNTER-REAY (No. 1 DHL Chevrolet): “It was great to be back on track here in Long Beach, it always is a great day to be able to practice here. But it was a weird day, just never really got a rhythm with the stoppages and the couple of incidents out there. I really didn’t get to see who was involved and what happened, but it took a little bit of time out of what we were trying to accomplish with the car. But again, it’s just great to be on track here. Always love Long Beach, always love getting back in the rhythm of this race track, and unfortunately Mike [Conway] likes it too. It’s a good time out there, we’re always just pushing each other. Unfortunately we didn’t get enough work done that we wanted to heading into qualifying on Saturday, but we’ll get it done in the morning hopefully in Practice 3 and look forward to qualifying."

MIKE CONWAY (No. 17 blu eCigs Honda): “It is hard when you want to get as many laps as you can in here but we got a good amount of laps. I think the most of anyone in the first one. Get rid of the cobwebs and the car felt good, and the same in the second one. We couldn't get a clear run. We got one in, and I think a lot of people, they either got one or they didn't get any so we were lucky to just get the one. It is a shame. We wanted to get through a few changes during that session. But the blu eCigs car feels good from the moment we stepped on the track. I'm just happy to be here. Trying to do a good job for these guys. [The car] feels good. Pretty happy with the balance. I think we have some areas to work on. But to still be running around the top two in the last two sessions is pretty encouraging."

SCOTT DIXON (No. 9 Target Chip Ganassi Racing Honda): “The Target car wasn’t bad today in the morning session and I think it’s fair to say things were moving in the right direction. In the second session I just lost it on entry and chased it into the wall. It was my fault."

DARIO FRANCHITTI (No. 10 Target Chip Ganassi Honda): “It was a difficult afternoon because nobody got more than one or two laps in. I think we made some good progress in the Target car, but I guess we won’t really know because of the lack of laps. We’ll find out more tomorrow."

JOSEF NEWGARDEN (No. 67 Sarah Fisher Hartman Racing Honda): “We had a hot and cold day. Practice 1 was pretty good. We didn't really finish off Practice 1 great, but I think we started the weekend exactly how we wanted to and we seem to have a pretty good base package to work from which is always nice and makes things a lot easier during a weekend. Practice 2 we really didn't get to run. We just kept getting caught out. We had a bit of an issue at the start so we didn't get out early and then once we tried to get rolling there were incidents one after another, which caught us out from even getting a lap going. It's great that tomorrow we'll have another session to work on it because in session 2 we didn't get much time to put in a lap but at least we got a little bit of a feel of the car. Tomorrow morning will be important for qualifying."

CHARLIE KIMBALL (No. 83 NovoLog FlexPen Honda): “It wasn’t an ideal start to the weekend. I think we have a pretty good car but we just have a couple mechanical things to look at. We have some things to change and try in the morning in set-up. We’ll be alright come tomorrow, we know what we need to fix."

ALEX TAGLIANI (No. 98 Barracuda Racing Honda): “It only took the Barracuda Racing team one race to figure it out on the street course. We weren't necessarily where we felt we needed to be in St. Pete and now we're definitely back in the hunt. (Engineer) Todd [Malloy] did a fantastic job working through the issues we had in St. Pete and the Barracuda Racing boys have put forth the effort, and it paid off. It looks good for us. We need to continue working at it and hopefully we'll have a great round of qualifying tomorrow."

E.J. VISO (No. 5 Team Venezuela/Andretti Autosport/HVM Chevrolet): “First testing day was a little bit tough for us. There’s been plenty of red flags due to accidents, and the mileage has been pretty limited. Anyways, we are still working on the setup – still need to find the right one for us. We are going to have a good sit-down with the guys (tonight) and just analyze our data and make a wise decision for tomorrow."

TRISTAN VAUTIER (No. 55 Schmidt Peterson Motorsports Honda): "We had big struggles in the morning session, but this afternoon I feel like we made some progress. It's very hard to judge lap times though because there were so many red flags. We're not really sure who got a clean lap in and who didn't. We did make some progress but I think we have a lot of work to be where we want to be."

SIMONA DE SILVESTRO (No. 78 Nuclear Entergy Areva KVRT Chevrolet): “Justin had an incident and was stuck into the wall and there was no yellow flag so I think I was the second car behind him and saw him too late and ran into him. It was a bit unfortunate because I think we were pretty quick and had a few things to try today and we are going to have to try and cram everything in tomorrow, but I think we are looking good."

SIMON PAGENAUD (No. 77 Schmidt Hamilton HP Motorsports Honda): “We made improvements in the car between sessions so it's good to know that the car has the potential to be where we want it to be. We need to work on the brakes because we are having a few issues there. When my car stops better I'm sure we'll be in a better position. I'm confident so far though."

ED CARPENTER (No. 20 Fuzzy’s Vodka/Ed Carpenter Racing Chevrolet): “It was an interesting day for us. In the first session, we just weren’t very good. We had understeer a lot of places. We didn’t unload the car where we needed to be. In the second practice, we were a lot better with Fuzzy’s Vodka Chevy. I was disjointed session and very hard to string laps together with the many red flags. The car was much better but I’m still trying to figure it out for much of the session. The time sheet doesn’t really look good but I feel much better about the car going into Saturday’s runs. We still have gotten more laps today than we didn’t last year on Friday. With the rain last year, Friday was a complete washout."

TAKUMA SATO (No. 14 ABC Supply A.J. Foyt Racing Honda): “Unfortunately it was a short day of work for the ABC Supply team. The car felt pretty good right away. Red flags interrupted the morning session [once] and the afternoon session [three times] which is a shame because we wanted to try a couple things and we couldn’t go through the test. We had to stop early in the last session because of a mechanical issue so it wasn’t very productive. However, we will concentrate on what we need to test tomorrow morning, get through that program and be ready for qualifying in the afternoon."

HELIO CASTRONEVES (No. 3 Auto Club Team Penske Chevrolet): “The Auto Club Chevrolet was really good today, we actually had a faster lap than we showed but that got taken away. We are happy with the gains we made between the sessions and the car should be fast all weekend. I am excited to see what we can do in qualifying tomorrow."

AJ ALLMENDIGER (No. 2 IZOD Team Penske Chevrolet): “We were a little off in the first session but luckily the No. 2 Penske Automotive Chevrolet made some gains in the second practice. After seven years away there are definitely some differences from what I remember, especially with how rough the track was. All in all a tough day but a productive day and we are ready for a good qualifying session tomorrow."

MARCO ANDRETTI (No. 25 RC Cola Chevrolet): “The RC Cola car felt pretty good today. There is still a lot of speed out there for us to find, and I am feeling optimistic thinking about our potential heading into tomorrow’s practice. Today we tried a lot of different things, but set ups are always a tricky thing to figure out. It’s great that the track is pretty similar to a year ago, so we can definitely put something together that will keep us competitive this weekend."