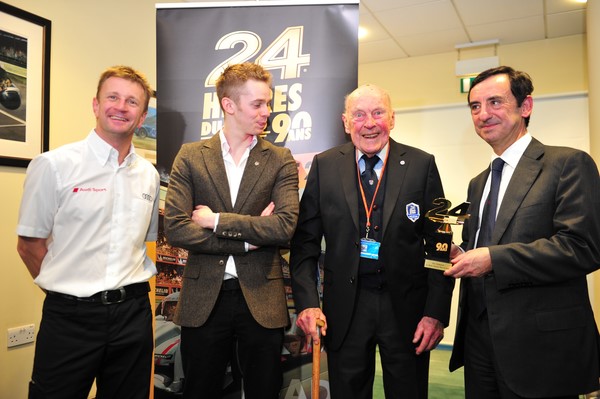 The first induction of a driver into the very private circle of the 90th anniversary Hall of Fame took place in the prestigious British Racing Drivers Club with which the ACO associated itself for the occasion.

In the context of the celebrations linked to the 90th anniversary of the Le Mans 24 Hours, the Automobile Club de l’Ouest has decided to honor the drivers through their doyen in the countries in which a round of the 2013 FIA World Endurance Championship is taking place.

After the BRDC Chairman Stuart Rolt’s speech and that of Pierre Fillon, the ACO President, Alex Brundle, who at the age of 24 is the youngest British driver entered in the World Endurance Championship and the Le Mans 24 Hours, helped Eric Thompson, 70 years his senior to put on the prestigious blazer which distinguishes this elite.

Eric was born on 4th November 1919, and he made his first Le Mans 24-Hours start in 1949 in a HRG entered by the Ecurie du Lapin Blanc finishing eight in the first post-war event. He then became a works Aston Martin driver and took part in the race on four occasions in DB2s and DB3s finishing third and winning the 2-3-litre class in 1951 with Lance Macklin. His last two outings at Le Mans were in 1954 and 1955 in a Lagonda and a Connaught respectively.

Thompson also raced in Formula 1 and he took part in one event counting for the F1 World Championship (Great Britain 1952, 5th in a Connaught) and 4 non-championship events.
After hanging up his helmet he became an insurance broker and then a bookseller specializing in rare motoring literature.

Surrounded by his wife, who was his time keeper at the trackside before they got married, his son and his daughter-in-law as well as several BRDC drivers entered in the WEC – Allan McNish, John Martin, Matthew Howson and James Walker – a very moved Eric Thompson accepted this commendation to British drivers before starting his brief speech with a touch of English humor by paying homage to the “British Medical Services which have helped me to live long enough to be here with you this evening!"

In three weeks at Spa-Francorchamps at the second round of the FIA World Endurance Championship, the Automobile Club de l’Ouest will render a similar homage to all the Belgian drivers who have taken part in the race since 1923.