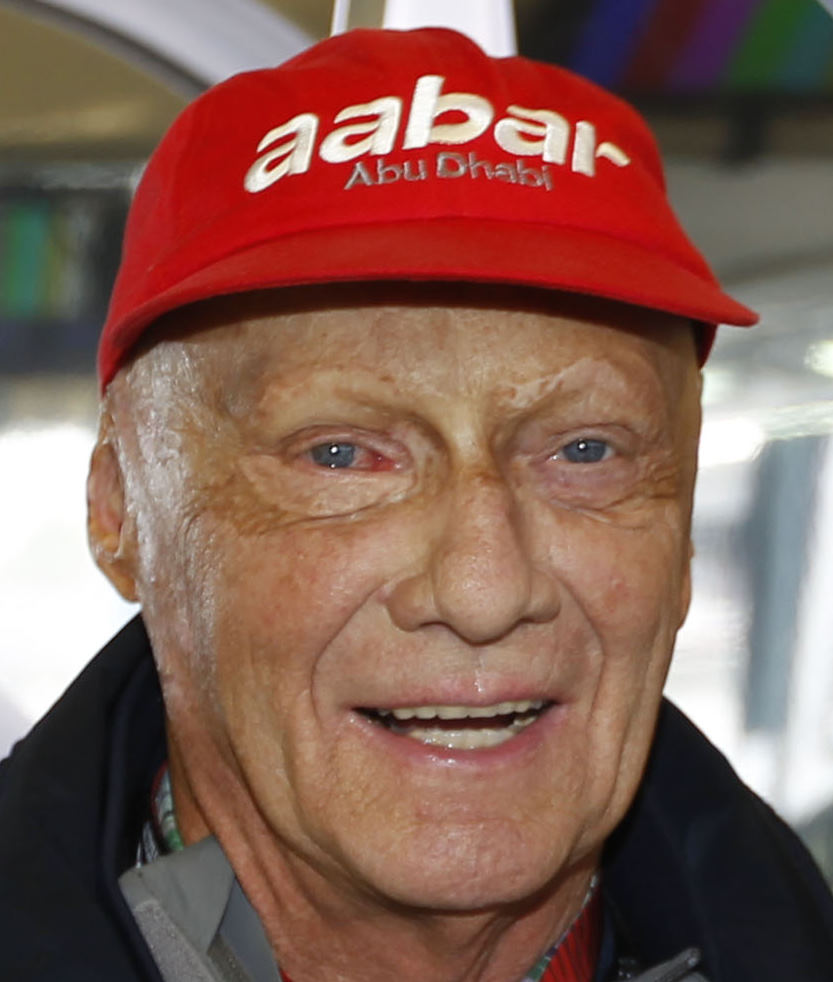 In the wake of the 'Multi-21' affair, where reigning triple world champion Sebastian Vettel laid bare his ruthlessness, former McLaren and Ferrari driver Berger compared the German with other F1 greats like Schumacher and Senna.

The Austrian wonders if Rosberg is made of the same stuff.

"Nico Rosberg is one of the best drivers in formula one," Berger told Der Spiegel.

"Whether he can be the best, he hasn't been able to prove because he's been lacking the car.

"If Rosberg had been driving a Red Bull, for sure he would have a lot of wins," added Berger.

But he thinks the difference between a Vettel and a Rosberg is something like Malaysia.

"I would have hoped Nico would have more killer instinct," said Berger.

"It is in fact not only just about the car, whether you win or not," he explained.

"Who wants to be world champion, has to be selfish. It's a rule as old as formula one itself."

Initially apologetic and sheepish, the Red Bull driver had almost three weeks to consider the matter and let rip in the days before the Chinese grand prix.

Vettel said he didn't obey the team order because teammate Mark Webber didn't deserve to win, also insisting that if he could live the fateful moment again, he would probably do just the same.

He even hinted the move was indirect payback for Webber's past indiscretions.

Asked about Vettel's verbal attack in Shanghai, Lauda told RTL: "There is not much to say.

"He would also have done it in Kuala Lumpur, but he was still confused about the situation.

"Sebastian just said the thing he needs to do to be a world champion, and well. Now everyone knows exactly what it is."

Lauda insisted Vettel's tattered relationship with Webber is not even a side-issue.

"It doesn't matter," he said. "Sebastian made a clear statement, and I would do the same. And he has been supported by the fact that Red Bull has now said there will be no team orders (anymore)."

Told, however, that harmony within a F1 team must be a crucial issue, Lauda persisted: "Who cares about peace? You have to win.

"Now at least everything is out and clear, which is better than the fog.

"The racing is now about the performance of Webber and Vettel, clean and simple, everyone knows what it is, and I think that's absolutely fine and correct," added Lauda.

In Shanghai on Friday, Austrian Lauda told RTL television: "We will not have team orders anymore in the truest sense of the words.

"The exception is the last race, but that would only be to prevent a third party from winning the championship instead.

"What happened in Malaysia will not happen anymore. Both will race freely," added Lauda.

Lauda's comments, however, are at odds not only with Brawn – who insists he did the right thing at Sepang – but with team director and shareholder Toto Wolff.

Wolff insists it's just a misunderstanding.

"Niki has perhaps expressed himself a little unclearly," he told Bild newspaper.

"If we have a technical problem, as we did in Malaysia, we need to act, just as we did. Niki also sees it this way.

"As a sportsman, I am against team orders," Wolff continued. "But as someone responsible for the team, I must think differently. I admit that openly."

He told Die Welt newspaper: "We also have a responsibility to 300,000 employees worldwide. Two Mercedes drivers crashing each other off the track does not fit the image of the group."

The saga seems to imply trouble at the top at Mercedes, with boss Brawn reportedly to be replaced by McLaren's Paddy Lowe, and even Austrians Lauda and Wolff seemingly at odds.

But, referring to Lauda, Wolff insisted: "You'd be surprised how well we get along.

"The truth is that he didn't know about the fuel problems that both our drivers had in Malaysia.

"The two of us, together with Ross Brawn — everything is fine," he said.

F1 contract uncertainty must end – Pirelli
(GMM) Pirelli is reportedly not ruling out withdrawing from formula one if the current uncertainty about the future continues.

That is the claim of the authoritative Italian daily La Gazzetta dello Sport, who said the tire marque's motor sport director Paul Hembery is very nervous Pirelli is yet to be offered a new supply contract for the 2014 season and beyond.

"We cannot remain in such a situation of uncertainty," Hembery is quoted as saying.

Dismayed McLaren targets Barcelona for step
(GMM) McLaren is now looking ahead to May's Spanish grand prix, admitting it is still far from pulling out of its crisis.

"If we have started turning it, it's a long corner," Jenson Button said in Shanghai on Saturday.

With the British team bringing upgrades to its struggling MP4-28 in China, Button told reporters: "We've made a small gain, but it's not as big as we'd hoped."

Unlike Button, Sergio Perez failed even to make the cut for the top-ten 'Q3'.

"I'm not very confident with the car," the Mexican admitted after crashing on the way into the pitlane on Friday.

"We have so many question marks, we don't know which direction we are going."

And the situation is unlikely to change substantially ahead of next weekend in Bahrain, with McLaren targeting the return to Europe instead for a bigger step.

"We've not made much of a step forward," team boss Martin Whitmarsh said on Saturday in China. "We're the fourth or fifth fastest car.

"We've got an upgrade for Spain now and that's got to take us forward."

Lotus lacking downforce, says Raikkonen
Lotus driver Kimi Raikkonen says his car is lacking downforce in comparison to its main rivals throughout the high speed middle sector of the Shanghai circuit, stating that more upgrades need to be applied before pole positions can be achieved.

"The gap was still quite big," Raikkonen said during the post-qualifying press conference. "We don't have that speed right now. Second is not too bad; I'd rather be in first place, but we didn't have the speed.

"We're missing downforce in the middle sector. We had a very small update here. I would say it is the same as in the last race. It seems to be working OK. We have some issues, but it's a similar story to Malaysia."

Raikkonen says the biggest gains Lotus have made this weekend are more down to setup tweaks and fine-tuning than new developments applied to the E21 chassis.

"The car is working the way I want it to," he added. “It has been a pretty tricky to get things exactly right. It's very sensitive, but we are happy to be where we are now."

On the other side of the Lotus garage, Romain Grosjean finished sixth fastest with his final Soft tire compound run, just over six tenths behind team-mate Raikkonen.

Webber sent to back of grid
Mark Webber has been sent to the back of the grid for the Chinese Grand Prix. The Australian, who ground to a halt during the second phase of qualifying, had just 150ml of fuel on-board his Red Bull, well below the one liter requirement for sampling.

In the past, a 'force majeure' argument had been in place, but due to the ambiguous nature of Lewis Hamilton and Sebastian Vettel's respective penalties in Spain and Abu Dhabi last year it was decided that the rule should be deleted for this season.

With Webber's car unable to be driven back to the pit lane under its own power and the necessary amount of fuel missing, the stewards were left with no option but to apply the penalty. Red Bull openly admitted to the miscalculation in the report.

"The team admitted it had not put sufficient fuel in the car. As specified in the Technical
Delegate’s report (Document 21), only 150ml of fuel was on board which was
insufficient to provide the 1 liter fuel sample and drive the car back to the pits under its
own power," explained a statement issued by the stewards after qualifying.

The need for fuel sampling is covered in article 6.6 of the technical regulations:

6.6 Fuel draining and sampling:6.6.1 Competitors must provide a means of removing all fuel from the car.

6.6.2 Competitors must ensure that a one liter sample of fuel may be taken from the car at any time during the Event. After a practice session, if a car has not been driven back to the pits under its own power, it will be required to supply the above mentioned sample plus the amount of fuel that would have been consumed to drive back to the pits. The additional amount of fuel will be determined by the FIA.

6.6.3 All cars must be fitted with a –2 'Symetrics' male fitting in order to facilitate fuel sampling. If an electric pump on board the car cannot be used to remove the fuel an externally connected one may be used provided it is evident that a representative fuel sample is being taken. If an external pump is used it must be possible to connect the FIA sampling hose to it and any hose between the car and pump must be -3 in diameter and not exceed 2m in length. Details of the fuel sampling hose may be found in the Appendix to these regulations.

6.6.4 The sampling procedure must not necessitate starting the engine or the removal of bodywork (other than the cover over the refuelling connector).

Pirelli defends its horrible tires
Paul Hembery, motorsport director: "It's clear that tire strategy is going to play a key role tomorrow and we saw that in qualifying today. With a difference of around 1.5 seconds between the medium and the soft tire, qualifying on the softer compound was the natural choice in terms of outright time. However, the soft tire delivers its best in qualifying over just one lap – a little bit like a qualifying tire – which is why the drivers left it until late in many of the sessions to go out and set a time.

"Although tire degradation will improve when fuel loads go down and more rubber is laid down on the track tomorrow, the medium tire seems to be the tire to race on, so this really opens up a number of different possibilities in terms of strategy.

"We think that most drivers will go for three stops although two is possible, especially for those starting on the medium tire. If we'd brought the hard tire, we would probably be looking at one stop, so although degradation of the soft tire here has been on the high side so far, we're confident that we're in for another action-packed race tomorrow – as has so often been the case in China."