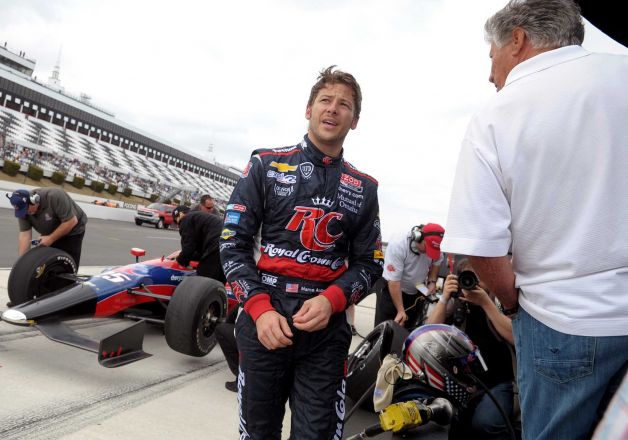 Just the sound of the engines roaring around the track gave Mario Andretti a good feeling.

"Beautiful," is how the racing legend described the sound of the return of the Izod IndyCar Series to Pocono Raceway on Wednesday.

The noise on this day was for a tire test sponsored by Firestone to help get drivers get ready for IndyCar's official return to Long Pond on July 7 for the Pocono IndyCar 400.

Several hundred fans took advantage of the free admission and sat in the lower level of the grandstand to watch Mario's grandson, Marco Andretti, three-time Indy 500 winner Dario Franchitti, 2012 rookie of the year Simon Pagenaud of France and Australian Will Power bring back the blurs of IndyCar racing.

The cars were moving around the track at a speed nearing 215 mph, generally 30 to 35 mph faster than the NASCAR Sprint Cup deliver twice per summer.

It was just one day, but everyone involved seemed to embrace the return of the IndyCar brand to a place where it was an annual attraction throughout the 1970s and '80s.

The much-needed 2012 repaving of the 2.5 mile tri-oval, the track's first new surface since 1995, was especially appreciated by the drivers.

Emerson Fittipaldi owns the IndyCar track record for qualifying, posting a time of 211.715 mph in 1989, but speeds were clocked three mph above that during the morning tire test session.

"It's a smooth, fast, but daunting type of track," Power said. "It's very nice, actually."

"I had some preconceived ideas since I drove a [NASCAR Sprint] Cup car around here," Franchitti said. "My thoughts were not quite as polite as Will's. My reaction was "Holy [bleep]' that's quick. That was my first thought."

The 26-year-old Andretti, a Lehigh Valley native who never got to drive at either of his backyard tracks, Nazareth or Pocono, said: "It was always a bummer because I always heard great things about that track [Nazareth]. From what I know about it, this is like Nazareth on steroids."

When the race was first announced last fall, Mario Andretti's first comment was that he was disappointed that he was "too damn old" to drive in it.

The elder Andretti was thrilled to be there in the pits with his grandson on Wednesday, albeit not in the role he would prefer.

"He loves it," Marco said. "He's cleaning the bugs off my shield, he's so bored. It's killing him not being in the seat. He's trying to find everything he can do."

Both Andrettis want the event to succeed.

Certainly they will be a big part of the advertising package once the race draws near on the calendar.

"I'm not surprised people are here today," Mario, winner of the 1986 IndyCar race at Pocono, said. "I think people underestimated the interest in IndyCars in this area and people who have never been able to witness an IndyCar race here will be very curious. I'd love to see this event be successful and build it back up to the level where it used to be. We feel we belong here.

"Like any event, especially when you are trying to revive something, you have to promote it and let people know it's happening. That's the key. You make noise, people will hear it."

Marco said he's glad that the promotional part of the event is not his responsibility.

"That's why I am glad I'm a driver," he said. "We're just going to have to see if the town gets behind it. Hopefully, they support it. Obviously we would have to give it more than one try. You can't write it off if it doesn't go good. I've heard a lot of positive buzz. I think it's going to be great."

Brandon Igdalsky, the president of Pocono Raceway, said he visited with some of the fans in the grandstand who enjoyed the unseasonably warm temperatures for early April.

"The fans are as pumped up as we are," Igdalsky said. "I talked to some people who were here for the first race in 1971 and they haven't been back here since 1989. They already have their tickets and they're ready to go."

Adding to importance of the race is the fact that it's part of a revived IndyCar triple-crown series.

The first part of the triple crown is the Indianapolis 500 on May 26 and the last part is the 500-mile season finale on Oct. 10 at Auto Club Speedway in Fontana, Calif. If a driver wins all three races, he or she will receive a $1 million bonus. Two wins are worth a $250,000 bonus.

"To pull that off would be pretty massive because it's three very tough tracks," Power said. "It's tough enough just to finish the three, let alone win the three." Morning Call