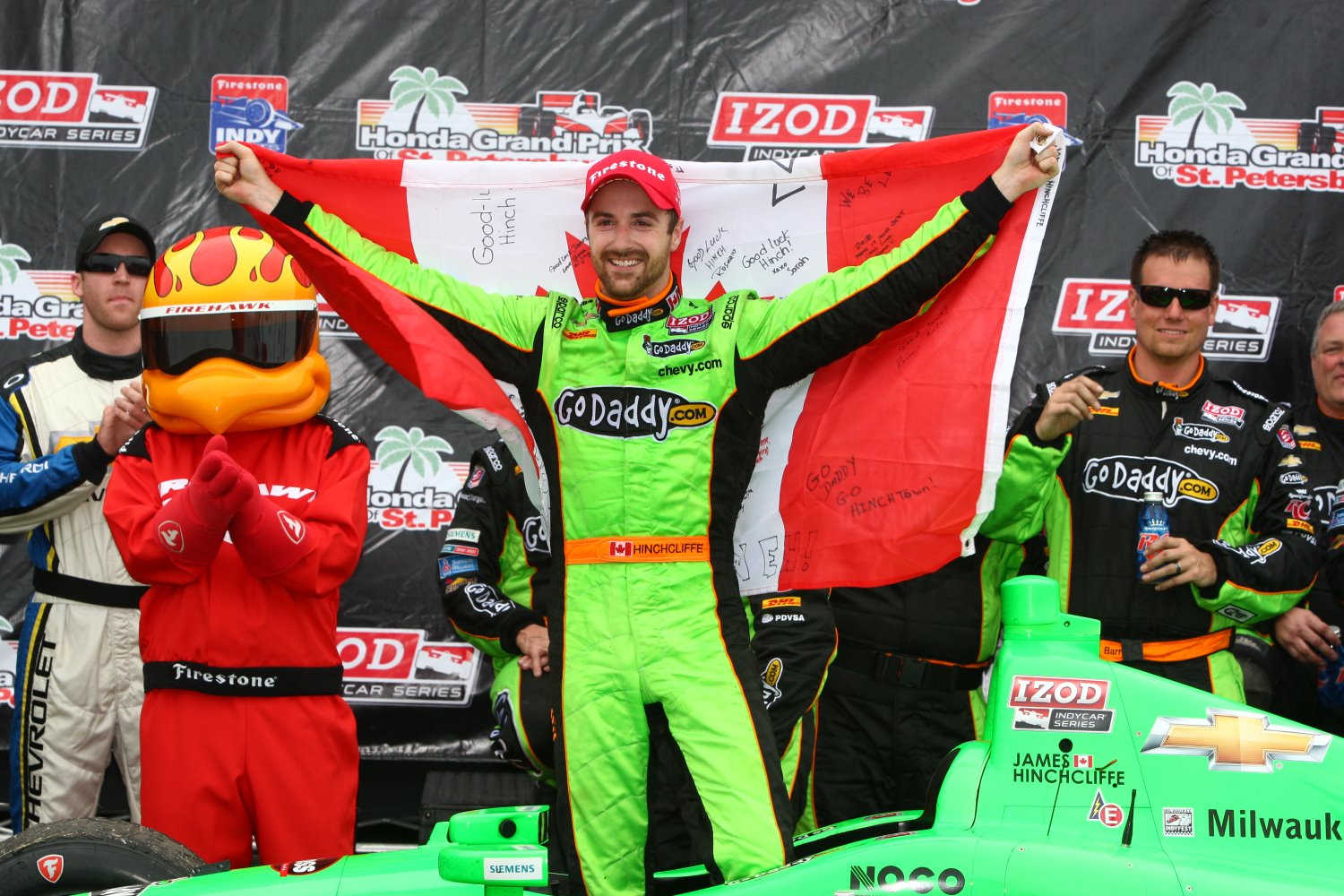 One race into the 2013 IZOD IndyCar Series season, it’s obvious that the "New Generation" is ready to shine.

1. James Hinchcliffe is not only an outstanding new talent, but he is also one of the great personalities in the IZOD IndyCar Series. By scoring his first career IndyCar win, he has firmly taken identity of the GoDaddy.com ride in the series while showing that he is a championship contender and also a major factor for victory in the Indianapolis 500.

2. Marco Andretti lived up to his family reputation and name by racing in the manner of his grandfather Mario and father, Michael, in the closing laps of the Honda Grand Prix of St. Petersburg. He pressured Simona De Silvestro in the closing laps in a battle for third place. As the two drivers came out of the final turn heading to the white flag, the tactic worked as De Silvestro’s car drifted high, allowing Andretti to dive underneath and take third place.

3. De Silvestro proved that with Chevy power she can run up front as a member of KV Racing Technology. She ran in the top three for most of the race but faltered on the final lap to finish sixth.

4. Rookie Tristan Vautier was spectacular in his IZOD IndyCar Series debut, running as high as fourth place before mechanical failure ended his race after 69 laps of the 110-lap race. But his time in the top five proved 2012 Firestone Indy Lights Series champion Vautier is a bright new face in this year’s IZOD IndyCar Series.

5. E.J. Viso was another surprise in his first race with Andretti Autosport. He was fast and fearless, but a bad pit stop foiled his effort. He was able to pedal his way back to the seventh place at the end of the race.

Watch out Ryan Hunter-Reay, Will Power, Helio Castroneves, Scott Dixon and Dario Franchitti – the new guard is ready to shine in the 2013 IZOD IndyCar Series. And that should make the next race on the schedule – the Honda Grand Prix of Alabama on Sunday, April 7 at Barber Motorsports Park – highly competitive and equally entertaining.

"It's only positive," team owner Michael Andretti said. "This whole field is so full of talent, such great personalities. It's great we have the mix we have. Simona just drove good all weekend long. Yeah, I think it's all just a positive for the series in the future. Vautier, great job.

Hinchcliffe, from Toronto, became the first Canadian to win an IndyCar race since Paul Tracy won a Champ Car Series race in June 2007 at Cleveland. His previous-best finish was third last year at Long Beach and Milwaukee. He finished fourth in his only other start at St. Pete, in 2012, and his first victory came in his 32nd IZOD IndyCar Series start. It was the 44th victory for Andretti Autosport.

And Hinchcliffe was able to forge his own identity in the GoDaddy.com car – a racing machine that was so connected to its previous driver, Danica Patrick, who switched full time to NASCAR after the 2011 season.

"I can't tell you how much that means," Hinchcliffe said. "They obviously took a big gamble on me. I'd only been in the series a year. We won Rookie of the Year but hadn't done tremendous things. For Andretti and Go Daddy to take that chance on us … we were in shouting distance of a win a few times last year. It was that last piece that was missing.

"The beginning of the season, first race, to get that out of the way, get the Go Daddy car in Victory Lane for the first time, it's awesome. Hopefully it's a match they'll carry on for a number of years to come."

The season-opening race at St. Petersburg featured everything, including drama, tremendous storylines, outstanding competition, a daring pass for the win in the final portion of the race and a popular winner.

"It was actually about the racing. What's that about?" Michael Andretti said after the race. "It was great. It was an all-out fight. Those guys were running flat out the whole time. That's what racing's all about. It was fun that Helio was keeping the pressure on there. You didn't know until the last stop what was going to happen, Marco and all that with his tires going off. That’s what makes this series so great.

"The racing product is the best in the world."

Hinchcliffe has the complete package to become the next big star in IndyCar. He is a tremendous driver with an infectious personality.

"It's good for all of us," Andretti said. "He is such a great personality. He's not only a great personality, but he also performs on the racetrack. You got it all. That's a great thing to have. I'm so happy and proud he's part of our team.
I'm excited. I'm glad he finally broke the ice. This isn't going to be his only win, I don't think."

Hinchcliffe was already popular because of his personality. But his ability as a racer was on display on the streets of St. Petersburg. Coming to the green flag on the restart on Lap 85, everyone anticipated that Hinchcliffe was coming. And when he did, there was no stopping his green-and-black machine as he pulled off a decisive pass.

"I'd like to say it was some masterful trickery," Hinchcliffe said. "I think Helio got a little hot in there. It's tough. That late in the race, the inside line gets dirty. I had to restart from both the inside and the outside at different points in the race, and it's tough. Being on new tires, on the outside, I was able to brake quite late. I saw him make the mistake and go wide. I'll wait a couple laps, he's on reds (tires), I watched him walk away from me in the last stint. I figured he was going by. I was doing my own thing, trying to conserve my fuel and tires to make sure I could make it to the end. It's a long stint at the end of the race there. Ten laps into that stint, he's still there, but he's not attacking. So the big thing for me was just be absolutely inch-perfect all the way around the track lap after lap. I knew I had a couple more overtakes, so that was going to help.

"Yeah, at the end of the day it was just putting the focus in the right places at the right times. Those last four laps, like I said, we were able to gap it a bit, and that's when it kind of became real."

Hinchcliffe’s teammate Marco Andretti lived up to his illustrious family reputation with an effort that made Mario and Michael proud.

"I don't want to speak too soon; there's still a long way to go in the season," Marco Andretti said. "I'm definitely pleased to reap some of the benefits for how hard I've been working, not only physically, but as you say, where I've been lacking. For me it felt like a win, but we'll take this. I think if we can have days like this all year, we can be in contention for a championship. That's obviously the goal. Great job to Hinchcliffe, and I have to give credit to Simona. She drove a helluva race, as well."

De Silvestro provided a tremendous storyline, and her sixth-place finish is not indicative of her event-long excellence on the racetrack. Expect her to be competitive when the series resumes at Barber.

"I think we can be pretty happy with sixth," De Silvestro said. "Now we know what we have to work on for the next race. It was really cool to be up front all day with Will (Power), Hinch and everybody; it was awesome. I think we can learn a lot from this weekend to have a better result at the next race. I really want to thank Chevy and my Nuclear Clean Air Energy sponsors for all their support. I’m really excited to get to Barber and see what we can do there."

Viso also showed signs of dramatic improvement. His move to Andretti Autosport could make him a factor this season.

"It’s been tough to survive and make it to here, but the team did a great job to get me a very competitive car and give me all the tools to stay battling in the field," Viso said. "I’m feeling good about this year; I think we will be able to achieve good positions."

And then there is Vautier, the young Frenchman who has teamed up with Simon Pagenaud at Schmidt Peterson Motorsports and was highly impressive in his series debut.

"I feel good," Vautier said. "We had a great weekend. We made some progress and were right in there during the race. Schmidt Peterson Motorsports gave me a great car. It was very good on tires, so we could be very consistent. It is just a shame I was having a lot of fun running with the other guys and wish I was still out there."

It was a great day for the new stars of IndyCar. But the same could not be said for some of the more established names.

Power looked like he had the car to beat before JR Hildebrand plowed into the back of him during the final caution period of the race. Hildebrand admitted he was "messing with some knobs" in his car, and that was enough to distract him from avoiding Power, who was warming up his tires.

"We just have to move forward and look ahead to Barber," Power said.

Defending IndyCar champion Hunter-Reay had an issue with a stuck throttle forcing him into the pits for repairs. He finished 18th.

"That’s racing," he said. "You can be on the highest high, and then next weekend you can be on the lowest low. We just have to ride it, and we'll come out swinging next week; it's all a part of it. It's a great win for James Hinchcliffe and Andretti Autosport."

And four-time IndyCar Series champion Dario Franchitti finished last in the 25-car field when he crashed on Lap 18 after he left pit road for what would be his only pit stop.

It was not a day for the established names of IndyCar, but it was a great day to showcase the new stars of the sport. And the emergence of new talented stars is enough to excited one of the veterans of the series.

"It’s so good for the series, that's for sure," Castroneves said. "Younger generation is kind of coming over. We saw at the qualifying some of the guys, especially guys from Indy Lights coming over, doing well, which is the case of Hinch.

"It's great. The series needs that. Good for him. I'm sure he's going to succeed, continue to succeed in the future, no question about it." IMS.com