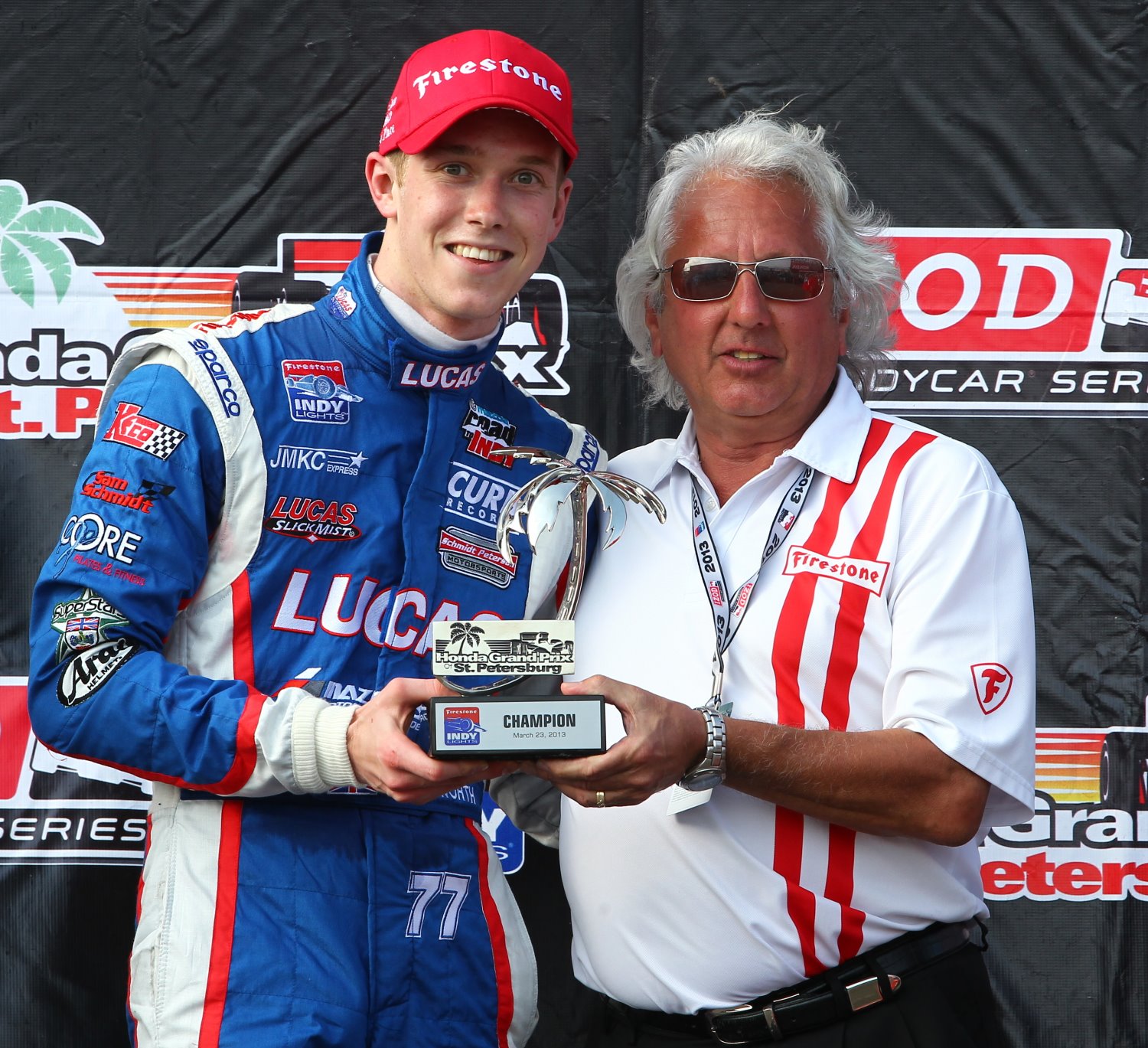 Jack Hawksworth, who earned the 2012 Star Mazda Championship, won in his Firestone Indy Lights debut for Schmidt Peterson with Curb-Agajanian Motorsports after leaders Carlos Munoz and Gabby Chaves tangled while battling for the lead.

Munoz, the Sunoco Pole Award recipient in the No. 26 Dialy-Ser-Andretti Autosport car, was battling Chaves in the No. 7 Schmidt Peterson with Curb-Agajanian car entering Turn 1 of Lap 11 when they made contact. Hawksworth made his way around the scene to take the lead, which he held the remainder of the 45-lap race.

Hawksworth led Peter Dempsey across the finish line by 4.9 seconds for the fourth consecutive victory at St. Petersburg for a Schmidt Peterson car. The past three winners (J.K. Vernay, Josef Newgarden and Tristan Vautier went on the win the series title).

JACK HAWKSWORTH (No. 77 Schmidt Peterson c/w Curb-Agajanian, winner St. Petersburg 100): "I'm so fortunate to be with these guys and working with such a great team. They've helped me develop over the winter and today I nearly scooted off on the first corner and they gave me a really, really good car. What a great way to start the season." (Did you ever think you might not make it to FIL this season?): "I never thought too far ahead, I wanted to focus on each race last year and that's the same this year. We've got to go out there and win each race, this one's over and now we've got to go out to Barber and try to win that now. We've got to concentrate on the job you're doing. When you're with such a good team the expectation is to win. Second or third isn't on the table. You've got to make the most of your equipment, go win races and thankfully we've been able to do that today."

PETER DEMPSEY (No. 5 Belardi Auto Racing, finished second): "It feels great you know, owe it to Belardi Auto Racing and Brian Belardi for giving me the opportunity to be here. Glad to bring the car home today because we are fighting for a championship. Congrats to Jack. The car was good all race, I was happy with the Firestone tires. I think they were better on the longer run. Started off the season in 2nd place, I'm not going to complain." (About best finish for Belardi in FIL) "We are not satisfied with 2nd so we aren't going to be happy until we get that first win. But for sure, it's definitely a good starting point and if we keep building on this I think we are going to be in the hunt."

SAGE KARAM (No. 8 Schmidt Peterson c/w Curb-Agajanian, finished third): "This is what we came here for. Try to get good points and make it to the podium and that's exactly what we did. I can't thank the Schmidt Peterson crew enough. They really put the car dialed in there for a good race car. We just got to figure out a little bit more speed on new tires and we can be up there with them." (Being a part of Schmidt Peterson): "They are by far the most successful team in Indy Lights, so it was a no brainer to come to Schmidt Peterson Motorsports. I mean, they won the last three titles so, like I said, it's a no brainer. I'm going to give them my best, and I know for sure they are going to give me theres."

JUAN PABLO GARCIA (No. 2 TMR-International-Euclid Chemical, finished fourth): "I'm very happy to get this fourth place. It's my first top-five of this season. I'm happy to start like this. My car was really oversteering. It was very loose from the beginning and it was very hard to the pace. There were some times that I thought I was going to lose the car because it was so sideways."

ZACH VEACH (No.12 K-12/Andretti Autosport, finished fifth): "Overall, I think it was a good weekend for out first time out. It was fun battling with my ex-teammate (Sage Karam). That is something I wanted to do for a while. I just got a little carried away with the tires. We know what we have to do different and show up at Barber. Hopefully we move up a few more places in the grid."