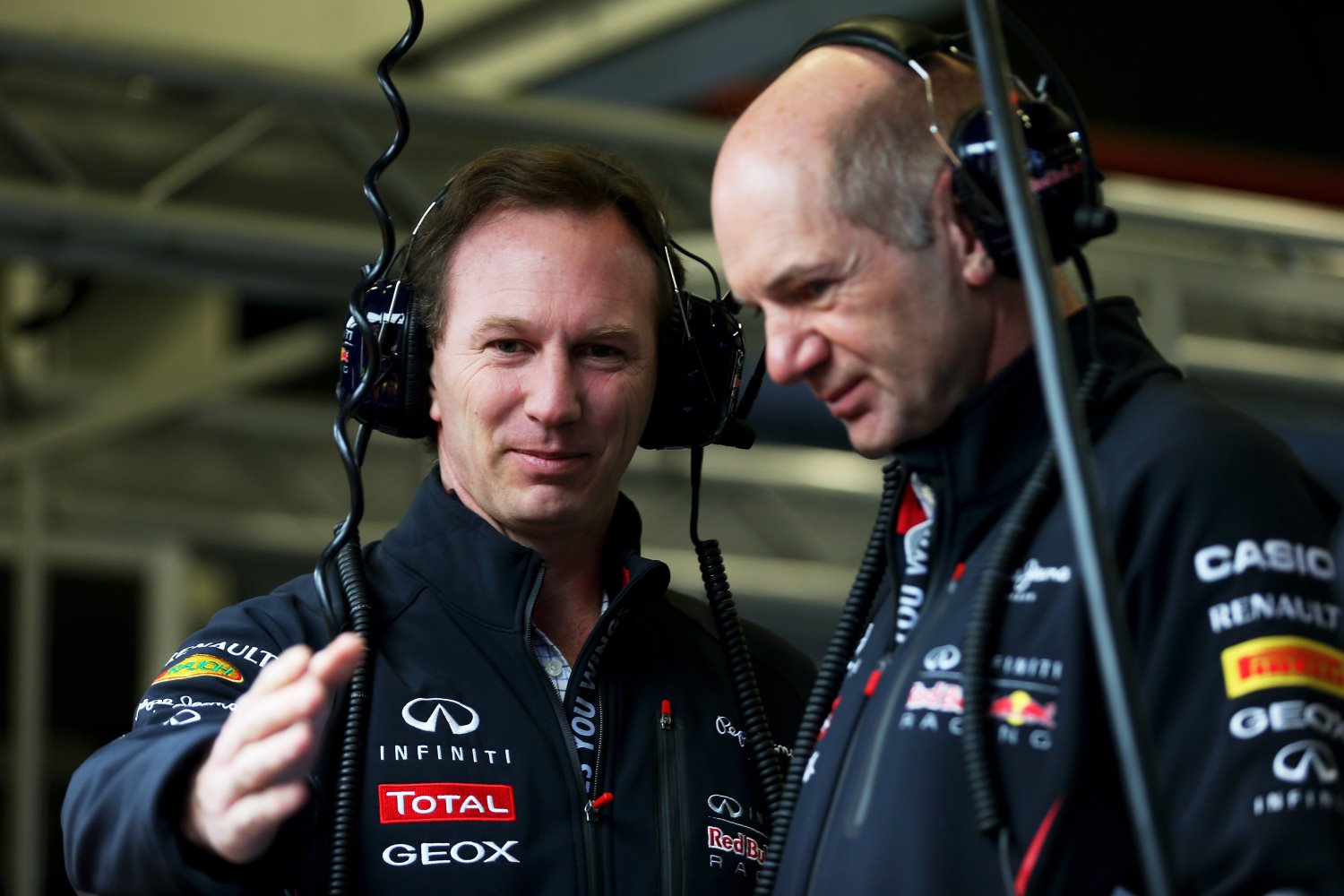 Australian Webber had a terrible start and then a KERS issue in his home race, and Horner said afterwards: "You need to ask McLaren why the ECU didn't work because he was blind and had no telemetry.

"It is something they need to get on top of because it caused a lot of issues during testing," he added.

Horner is referring to the standard electronic control unit mandatorily supplied by McLaren subsidiary MES to every team in F1.

As for McLaren's disastrous new 2013 car, there is talk of reverting to last year's winning machine, but it is believed that the British team is more likely to try to improve the MP4-28.

"McLaren is famous for responding quickly to problems. It is impossible to write them off," he said on German television RTL.

Vettel's 'Hungary Heidi ate the tires’ – report
(GMM) After a winter of disintegrating Pirellis, Lotus' Kimi Raikkonen was the kindest to the tires in Melbourne, and the Finn duly won.

"For me, making two stops was impossible," Ferrari's Felipe Massa is quoted by Brazil's Totalrace.

According to teammate Fernando Alonso, who finished second, "I don't know how they (Lotus) did that."

Indeed, among the top six finishers, Raikkonen was the only one on a two-stop strategy.

Australia, however, was much cooler than was expected by the European circus, and so team boss Christian Horner is looking ahead with curiosity to Malaysia.

Indeed, Kuala Lumpur should be hot this weekend, but it also could be wet.

"Let me answer with a question," said Vettel in Melbourne late on Sunday. "Have you ever been to Malaysia? It rains every day!"

'Massa should not be happy' – Briatore
(GMM) Although competitive throughout the weekend, Felipe Massa looks set to maintain his role as Ferrari's 'number 2'.

The Brazilian was running ahead of highly rated teammate Fernando Alonso in Melbourne until the second round of pitstops, when it was the Spaniard called in for service first.

"Felipe should not be at all happy," former Renault boss Flavio Briatore is quoted as saying by Italian media.

After the race, in which he finished fourth to Alonso's second, Massa told Spanish television Antena 3: "Of course you are not happy when you fight to win and you finish fourth.

"It was positive until the second stop. It seemed too early for Fernando but it was the right decision."

O Estado de S.Paulo newspaper quotes Massa as saying: "There is a degree of frustration, because I was not passed except in the pits."

And Spain's El Confidencial quotes him adding: "Yes I was upset when Fernando got ahead of me. That was the only problem of my race, where I lost two positions."

The perception in the paddock is that Spaniard Alonso has been punching above his weight with a less than competitive Ferrari, while Sebastian Vettel raced to the last three championships at the wheel of his Adrian Newey-penned car.

El Pais newspaper quotes Alonso as saying: "I'm not asking for a car one second faster than them, but one with which we can fight.

"Red Bull has won two of their titles in the last race, and that was with a car that was a second faster than the rest," he added.

"Making the most of what they have is not one of their virtues," Alonso quipped.

"It is usually the same: first and second in qualifying and then something always happening. Sometimes the start, sometimes reliability, sometimes the tires," he reportedly said in Melbourne on Sunday.

Sutil stuns paddock with F1 comeback
(GMM) Adrian Sutil stunned the F1 paddock on Sunday by looking so competitive on his return to the sport after a season away.

Written off by some after his 2011 assault conviction, the German is back with Force India this season and in Melbourne even led some laps — a first in his career.

Sutil ultimately finished seventh in Melbourne as his tire strategy played out, but the 30-year-old told Auto Motor und Sport: "It is surprising how well it went.

"When I saw P1 on the pit board, it was quite a feeling."

Deputy team boss Bob Fernley, however, insists he was not overly surprised.

"During the testing, if you had analyzed it, you could see the promise," he is quoted as saying.

First to seventh might then sound disappointing, but Sutil could not stop smiling.

"Considering that three weeks ago I didn't even have a seat and was only able to test for three days in Barcelona, it could hardly have gone better," he said.

Hulkenberg to use new chassis in Malaysia
(GMM) Nico Hulkenberg will tackle this weekend's Malaysian grand prix with a new Sauber chassis.

90 minutes before his first race for the Swiss team in Melbourne, mechanics went to prepare the grey C32 for the race but "fuel suddenly splashed out of the car," according to well-connected Blick correspondent Roger Benoit.

"(It was) a problem with the fuel tank, which is directly behind the driver."

Team manager Beat Zehnder: "It must be a crack in the tank. It's something I've not experienced in twenty years."

Benoit revealed that Hulkenberg's C32 – which could not be raced in Australia – has now been sent back to Switzerland, despite practice for the Malaysian grand prix looming in mere days.

He wrote that the 25-year-old will use the spare car at Sepang, while another spare is sent to Malaysia from Hinwil as soon as possible.

"I'm bitterly disappointed but at the same time I'm not blaming anyone," said German Hulkenberg on Sunday. "Things like this happen in racing."

With the British squad set to lose its Vodafone title sponsorship at the end of the season, many have joined the dots and surmised that Mexican Perez's links to billionaire Carlos Slim will fill the financial void in 2014 and beyond.

Asked if that assumption is adding pressure to his shoulders, team newcomer and 23-year-old Perez said: "No, on the contrary. Pressure and criticism is just normal.

"Hopefully Telmex will be at my side again soon," he told the Spanish sports newspaper Marca.

"I've been with them all through my career, practically since I started, so I'm a little sad they are not with me this year, because the team still has a contract with Vodafone.

"I would love to see the blue on my car again."

Perez insisted he is not bothered that some people think his Telmex connection is the only thing that got him into F1 with Sauber, and subsequently into a top car with McLaren.

"I don't want to prove anything to the people who think that," he insisted.

"They are the best team in terms of marketing. Any big company wants to be here," added Perez.

Ferrari asked Perez to 'take care' of Alonso
(GMM) Sergio Perez has claimed that, whilst a Sauber driver, Ferrari often asked him to "take care" of Fernando Alonso.

The Mexican's comments will ramp up speculation that the famous Italian team uses its political links in the paddock for a performance advantage.

Perez, formerly under Ferrari power at Sauber and also the cream of the Maranello marque's driver development 'academy', suddenly switched allegiances for 2013 as he accepted the offer to replace Lewis Hamilton at McLaren.

He had been asked by Spanish sports newspaper Marca if he feels a difference when he looks in the mirror and sees world champion Sebastian Vettel, or Ferrari's Alonso.

"In my case no," he answered. "I make no distinction between them.

"Last year, when I was communicating with Ferrari, they often asked me to take care of Alonso, but I don't know if they asked just me or the whole grid."

Asked if he sees leaving the Ferrari family as a missed opportunity, the 23-year-old answered: "No, it's an experience that led me to a better place.

"I'm happy at McLaren; I hope to stay here for many years, maybe my entire career."

Although currently at the wheel of a struggling McLaren, Perez insisted he was happy in Melbourne to have been quite close to lead driver Jenson Button's pace.

"I'm happy with that because Jenson is one of the very best drivers," he said.

"He has won in Melbourne three times. I didn't know where I would be compared to him, so while it's not a relief it is reassuring that I am strong and close to a world champion."

Ultimately, the 2008 world champion opted to switch camps, with most in the paddock believing he wanted to fly the roost, make more money and enjoy a lighter off-track load.

Interestingly, however, Hamilton has told the German newsmagazine Focus that "McLaren's offer (for 2013) was a bit more lucrative" than Mercedes'.

"I would have earned more there (at McLaren)," he insisted.

Money aside, Hamilton claims there were also sporting reasons for the switch. Indeed, given McLaren's calamitous start with the flawed MP4-28, his choice now appears inspired.

"At McLaren it was usually that I would win four or five races (per season) but never the title at the end.

"This gave me the feeling that, for the long term, I'd rather go somewhere else," said the 28-year-old.

"(McLaren supremo) Ron (Dennis) said that he could have kept Lewis if he had wanted to but he didn't want to," the F1 chief executive is quoted by Autoweek.

"Lewis told me that he would have rather taken a year off (than stay at McLaren). In fairness to Lewis, he didn't leave McLaren over money," Ecclestone added.

"I don't know what it was because of but it wasn't to do with money."