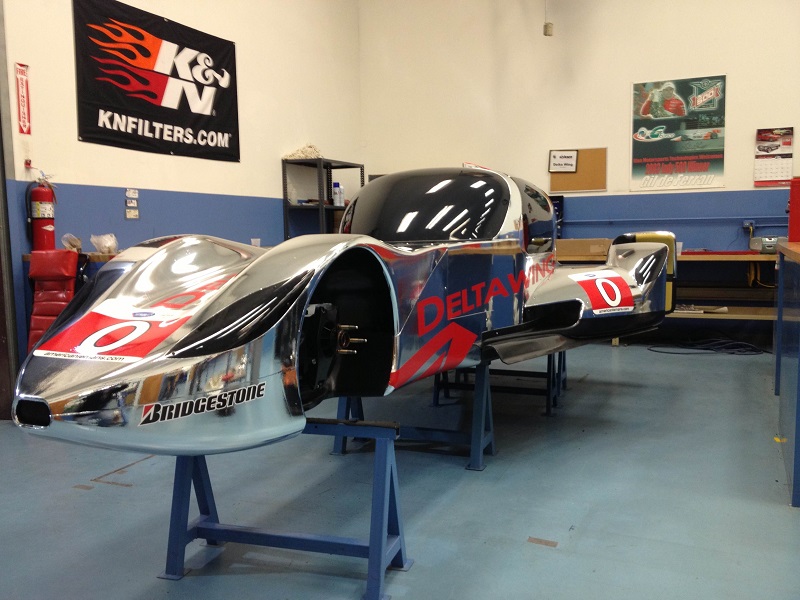 DeltaWing Racing Cars is pressing ahead on development not just with its open-top version, but also is revealing a coupe version that will premiere this week at Sebring International Raceway. A show car version of the coupe will be on display starting Thursday in the Austin Hatcher Foundation booth near the paddock, on vendor row just across from the back side of the pit lane structure.

The coupe version of the DeltaWing features a new tub and wider driver greenhouse, among other new elements, to comply with the new 2014 LMP1 regulations. The car will debut in the American Le Mans Series later this year, possibly as early as at Mazda Raceway Laguna Seca in May.

Besides the new hard-top configuration, the car is set to be fitted with a new engine designed and built by Elan Motorsports Technologies. On the current open-top DeltaWing, the team has updated its engine to a 2.0L turbocharged aluminum block for racing in P1.

“As the season goes forward, and we incorporate the new tub and new chassis with the new 2014 rules, and new engine, we think as with any new program that it will continue to improve in performance," said Dr. Don Panoz, managing partner, DeltaWing Racing Cars. “As we get close to the latter part of the season, we’ll be capable of getting onto the podium."

Elan engineer Simon Marshall (above), who has seen the original DeltaWing and this new coupe through all stages of its development, described some elements of the coupe.

“The coupe should be a no-brainer for safety," said Marshall. “It’s just to remove the possibility of the driver’s head being struck by anything. If the car is upside down, there’s more of a controlled space."

One of the coupe’s more notable aspects is that the driver will sit in the middle of the cockpit, rather than on the left or right hand side.

The DeltaWing powered by Elan makes its debut in the LMP1 class this weekend, with drivers Andy Meyrick and Olivier Pla.

The Austin Hatcher Foundation for Pediatric Cancer has partnered with the ALMS through its “Fueling Potential: Racing to Win" Campaign to help pediatric cancer patients and their families.