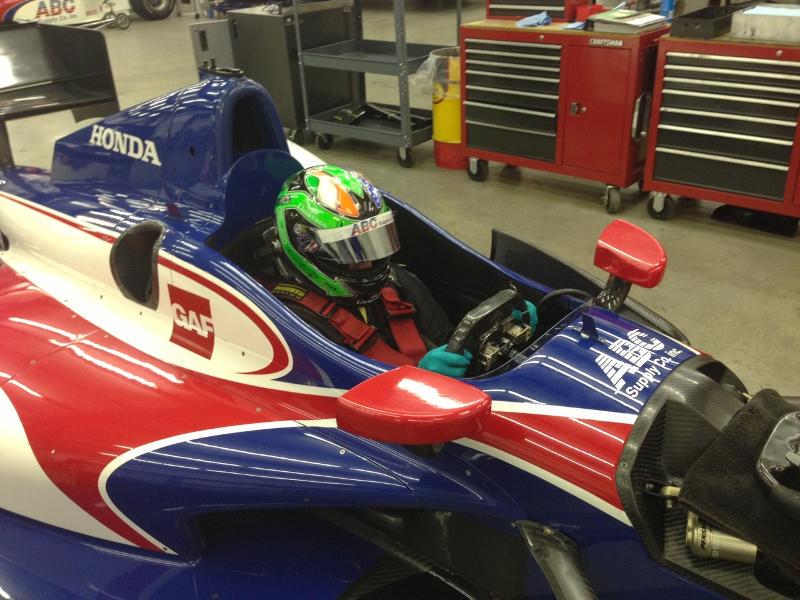 American Conor Daly impressed AJ Foyt and many others in his first IndyCar test in Sebring, Florida on Thursday, December 13th. Daly participated in day three of INDYCAR’s three day series test along with 14 other drivers.

It was an opportunity for Daly to experience an IndyCar for the first time and for the Foyt Team to look at how Daly would perform in that environment. Over the course of the day, Daly completed 120 trouble-free laps.

Q: Your first IndyCar test went very well – how did this test come about?

A: I had a few conversations with Larry Foyt off and on over the last couple months and I received a call from him while I was racing in India and he asked if I wanted to test. Of course that was an easy question to answer!

Q: What were your impressions of the car compared to other cars you have driven?

A: I thought it was a fantastic car to drive. It was not as difficult as I thought it would be to get used to but the AJ Foyt Racing team made it as easy as possible to get comfortable with the car. It had a nice bit of power and the brakes were incredible, a lot of fun overall!

Q: What was it like to work with AJ Foyt?

A: AJ is awesome to work with, he is a true racer. He loves everything about motor sports. I really enjoyed being a part of such a legendary team, working with AJ and the rest of his group of guys.

Q: Were you surprised that there was so much interest in your test from the media?

A: I'm not really sure. I never know how people will respond to what I do so in the end it was just nice to receive a lot of comments on how excited they were to see me in an IndyCar.

Q: This year you have won in GP3, tested a Formula One car, won races in India and tested an IndyCar – that's quite a variety in one season. What was that like?

A: It has been a very cool year. I've been very fortunate to get the opportunities that I've had and I'm very thankful.

Q: What's your plan for next year?

Q: What has the benefit been to racing in Europe for the past two years?

A: It has been the toughest environment in the world to race in so I have been learning at an incredible rate. As a driver who is trying to develop into the best driver I can be, Europe is the best place to do it.

Q: Why is it so hard for an American to succeed in Europe?

A: One of the difficult things is really just finding the funding to do it. These days more and more drivers are coming with huge budgets which then allows the team to not worry about trying to find some team sponsors to support the drivers that they want to run. Also, when you race in Europe it's a big commitment and you can't just do it for a year. If you want to get to F1 you have to be racing there as much as possible.

Q: When you were in Austin for the Formula One race, did you sense that Formula One cares about having an American driver?

A: There were definitely a lot of people there who were really excited about seeing an American in F1 in the near future. It would be nice to have someone waving the American flag in the Formula 1 world again.

Q: Were you surprised when you saw the track in Austin?

A: I was definitely surprised, it is an incredible facility. Without a doubt it is one of the best in the world.

Q: Do you get more autographs requested from Europe or America?

A: I don't really know honestly. It's hard to say, just depends on where I am.

Q: You just turned 21 – still very young – do you think your career is progressing as you would want?

A: It is weird, I feel old. I think it's because I've always chosen to hang with older people and since I have a lot of friends in IndyCar I just really feel like it is taking me too long to get to the top level of racing because I want to do battle with the guys at the top, whether that be F1 or IndyCar. But in reality, I've got to be patient because I'm still learning and you don't want to jump into something you can't handle at too young of an age.

Q: If you were to guess right now – where do you see yourself racing in 2013?