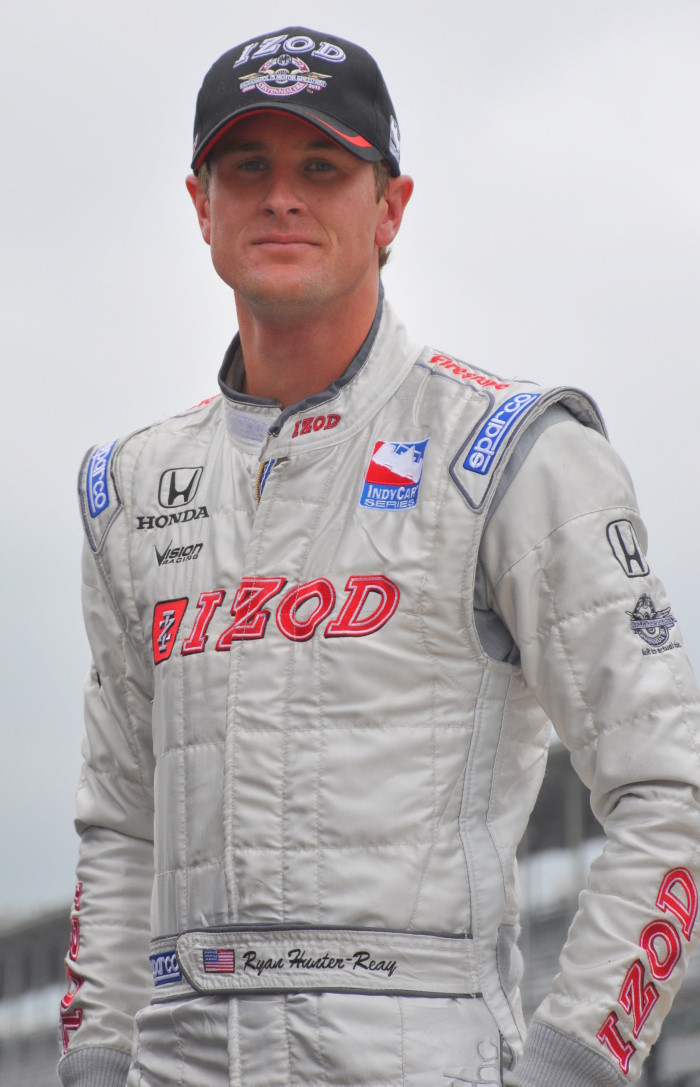 THE MODERATOR: Welcome, everybody, to today's INDYCAR conference call. We're pleased to be joined by 2012 IZOD IndyCar Series champion, Ryan HUNTER-REAY who will represent the series and Team America in the Race of Champions in Thailand later this week. Ryan, thanks for taking the time to join us today.

RYAN HUNTER-REAY: Thanks for having me on.

RYAN HUNTER-REAY: Well, I saw Jim Hancock who puts the program together, who promotes Race of Champions and runs the event. I saw him at the Fontana race, and we had just won the championship. Before I even got up on the stage to accept the trophy with my team, he said you want to do Race of Champions in Bangkok? And I was in a pretty yes mood, so it was yes to any question I was hearing, for sure. I'm looking forward to it.

Q. As I said, some of the biggest names in worldwide Motorsports are racing this weekend in Thailand. Sebastien Vettel, the F1 Champion is going to be there. Jorge Lorenzo, the MotoGP Champion, Jamie Whincup who won the V8 Supercars Championship, yourself, and Michael Schumacher is going to race there. I saw yesterday you had been placed in the same pool as Michael Schumacher. So growing up, did you ever dream of racing Michael Schumacher? What do you think it will be like to race him?

RYAN HUNTER-REAY: I certainly looked up to Michael for a long time. His work ethic and his team mentality has certainly rubbed off on me. He's a guy I've looked up to for a long time. You know, he's had a huge impact in the racing industry and on drivers, young drivers such as myself coming up. So it will be pretty cool to square off against him, first off.

I'm looking to advance as far as I can, and hopefully surprise a few folks there.

Q. You're not going to be driving an IndyCar in the Race of Champions. They have some unique cars for you to drive. How do you prepare yourself to drive a KTM X?BOW or a rally car or something like that?

RYAN HUNTER-REAY: You really don't. I don't have any of those toys to mess around with at home. So I think you have to rely on your skill set that you kind of worked on over the years and jumping from car to car, sports car to IndyCar to some of the heavier stuff that I've driven, stock cars and stuff, you just have to rely on the skill set.

So we'll see. It should be fun. I was a little bit disappointed that there is not some type of open wheel formula car in there, but I think it definitely went more of the rally drivers there. But, hey, it's still a car. It has four wheels and a steering wheel, two pedals, three pedals, you have to make it work.

Q. Before you head off to Thailand, you get a chance to drive your IndyCar at Sebring. Tell me a little bit about jumping back into that car and preparing for 2013?

RYAN HUNTER-REAY: Yeah, we're really looking forward to getting back to Sebring and kind of just bringing some things full circle from last year. We want to confirm a few things, test a few new things, and really just get some answers before the Holidays come. So it's a good opportunity, a great opportunity to get back in the car.

I'm definitely threading the needle travel wise trying to make it to Race of Champions. Luckily they let me squeeze the Sebring test in. I'm showing up as practice is going on in Bangkok, so I might miss a little practice. But the opportunity to test the IndyCar was certainly my top priority.

So it's going to be fun. It's going to be tight. I think I'm going to have to take a plane or helicopter from Sebring to get to my flight in Miami on time. But it will be one heck of a travel stint.

Q. Ryan, a question about the field that is racing in the Race of Champions. Obviously, it's a chance to get to know some of the champions that I mentioned earlier. Guys like Romain Grosjean from F1, and Mick Doohan, motorcycle champions and things like that. Is getting to meet those guys or the racing the most important part to you?

RYAN HUNTER-REAY: Just really the whole atmosphere. Being invited to the Race of Champions in the first place is a pretty big deal for me. It's a race I've watched for a while and something I've wanted to be a part of. Before we did this year, I think certainly deserved our spot. But it's going to be something racing those guys and really getting to know them and meeting some new people from around the world of Motorsports.

You really have a lot of respect for these different talent pools that come from F1, MotoGP, rally driving, and at the same time, you can learn quite a bit too about how these guys approach the challenge of the Race of Champions. I'm looking forward to it. It's going to be a lot of fun. Hopefully, we'll have a good time and do well.

Q. Is there one driver in the field that you're looking forward to meeting any more than the other.

RYAN HUNTER-REAY: I'm looking forward to meeting Michael. He's the man, 7?time world champion. There is so much to learn from him that I'll just be a sponge around him, for sure. But everybody's going to be having fun at the same time. So it is a competition.

Q. I'm interested in knowing what unique things you've gotten to do since winning your championship, and second part is will we expect to see you race again in the 24 Hours at Daytona?

RYAN HUNTER-REAY: Since the end of the season, it's been so busy, it's going to be tough for me to recap what I've done. But going straight to New York and doing the David Letterman show was a highlight for sure. I was at the top of the Empire State Building with my racing suit and the Cup. A crowd gathers around pretty quick when you have a guy with a race suit on the top of the Empire State Building.

But it's been a lot of fun, a lot of media opportunities and a lot of exposure, really. Also celebrating with our sponsors is very special. They're part of our family at Andretti Autosports, and they're a big part of what we do and this championship is theirs as well.

You know, I've been flying around. I can't even in a nutshell give it all to you because I've been on the road every two days nonstop, living out of a suitcase. It's been fun. Wouldn't want it any other way. Now with the Race of Champions coming up, this is probably the final race of 2012 for me, so looking forward to that.

And Daytona 24, should be able to announce those plans here next week, so stay tuned for that.

Q. What's been the reaction among the IndyCar community to your taking the No. 1, even though it's modified and wearing that next year?

RYAN HUNTER-REAY: Well, for the most part, the fans really liked the idea. I looked at the history of running the No. 1, and it was common, it was tradition for every year for that to occur. Up until 2005 or so, it stopped for about 7 or 8 years. We're just picking the tradition back up. I haven't had a lot of feedback from the drivers.

Scott Dixon and I had a laugh about how bad his season was when he ran the No. 1. But Ganassi at that time had just switched engine manufacturers and they were starting from scratch. So it's like I said in the past, lot of superstitious people in racing, and we're certainly tied to our numbers. 28 is a big deal for me, not only just the meaning behind it, but we've succeeded with the numbers, so naturally you'd want to keep it. But running the No. 1 is a privilege, and definitely going to take advantage of that.

Q. As a follow-up, is the test in Sebring basically a Chevrolet test or is it Firestone? Is it a tire or just basically a big Chevy test?

RYAN HUNTER-REAY: No, actually, I think it's just all teams are coming or a lot of teams. I shouldn't say all of them. A lot of teams are going to show up and test. I'm not sure if that happened by one or two teams running the track and catching on and other teams jumping on board or what. But I don't believe this is a manufacturer's test.

Q. Enjoy that flight to Thailand?

RYAN HUNTER-REAY: Yeah, it's going to be tough. It's eight something hours to London then a three hour layover, and then 12 plus to Bangkok from there. So it should be fun.

Q. Have you done any kind of reviewing tapes of Race of Champions? Are you going to see like Schumacher? Have you had any crossing of paths with him in the past?

It's not like years past in Race of Champions where you'd almost go on a rally course off? road and back on the pavement. So it's different, for sure. But I think it's going to have to be get in the car and get used to it.

Q. Do you get a sense it's one of those things that you really have to have car control and slow down to go quick on a course like this? Kind of a little bit hokie in that respect, but you just can't overdrive the thing.

THE MODERATOR: Thank you, Ryan for your time. We wish you the best of luck at the Race of Champions and at the test at Sebring, and we'll see you in the new year. So have a Happy Holidays.

RYAN HUNTER-REAY: Thanks, guys. Thanks for having me on. Everybody, have a Happy Holidays, and thanks for supporting and heading to Bangkok.