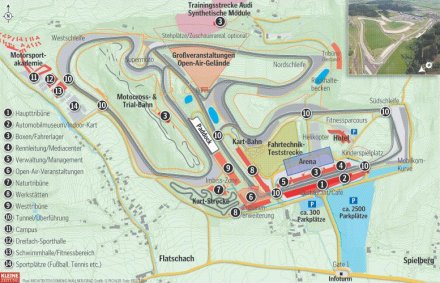 F1 reserves 2013 date for another European race
(GMM) A new date on F1's 2013 calendar has been reserved for "another European" grand prix, the FIA revealed after its Istanbul meeting of the World Motor Sport Council on Wednesday.

With the twentieth race date to be substituted in the wake of New Jersey's demise, the host of the replacement event is not yet known, but F1 chief executive Bernie Ecclestone had travelled to the meeting promising to try to revive the Turkish grand prix.

But France has also been pushing to return to the sport's annual schedule, while Helmut Marko and Sebastian Vettel this week flagged the possibility of an Austrian grand prix held at the former A1-Ring, now known as the Red Bull Ring.

The mystery race will be held on July 21, with Germany's date shifted to 7 July.

It is still unclear whether next year's German grand prix will be held as originally scheduled at the financially-embattled Nurburgring, or at Hockenheim.

According to RTL, Nurburgring spokesman Karl-Heinz Steinkuhler said Ecclestone had left open a "small window" for the talks over the 2013 race.

Red Bull can be Ferrari-like 'myth' too – Vettel
(GMM) Red Bull is "well on the way" to achieving the same sort of "mythical status" as fellow grandee F1 teams like Ferrari.

That is the claim of Sebastian Vettel, who after winning his third consecutive drivers' championship with the energy drink-owned team played down persistent rumors he could soon make the move to fabled Ferrari.

"Clearly Ferrari and Mercedes have a great history and a kind of mythical status," the German told Sport Bild.

"But we're well on the way to achieving the same with Red Bull. Realizing it needs to be our goal," added Vettel.

F1 legend Niki Lauda, however, can imagine Vettel eventually hanging up his Red Bull helmet and making the switch to another top team.

"He will eventually move somewhere else," fellow triple world champion Lauda, who won his titles with Ferrari and McLaren, told CNN.

"It's normal. Any skier changes his skis every year — so you have to change your cars at least once in your history."

"It only works in a dream," he told Italian radio Rai. "It would be a disaster."

Vettel frowns upon fans' Bruno Senna abuse
(GMM) Sebastian Vettel has distanced himself from a barrage of criticism directed at Bruno Senna after the recent 2012 championship finale in Brazil.

It was contact with Brazilian Senna's Williams that spun Vettel around on the first lap at Interlagos, and caused significant bodywork and exhaust damage that almost cost the German his third consecutive drivers' title.

Vettel said immediately after the race: "The grave of Ayrton Senna is here in Sao Paulo. Maybe someone has to go there and tell him what his nephew did today."

The 25-year-old was smiling and clearly joking when he made the remarks, but – according to German media reports – that did not stop some of his fans from defacing Bruno Senna's social media pages with abuse.

Vettel told Sport Bild: "I clearly distance myself from these so-called fans. In the end we are all part of a sport and it can always happen that we get in each other's way."

Meanwhile, he denied he lost any sleep over the recent yellow flag controversy, despite team boss Christian Horner admitting this week that it had been "an uncomfortable 48 hours".

"I always knew that I'd done nothing wrong," Vettel insisted.

Schumacher's fellow German Vettel was fighting for the title against Ferrari's Fernando Alonso, who ultimately lost the battle by 3 points.

"I was expecting a slightly different final race on the part of Michael Schumacher", Ferrari president Montezemolo admitted last weekend.

Italian Briatore, who was team boss when Schumacher won his first two titles with Benetton in the mid-90s, agrees with his fellow Italian Montezemolo.

"The way he (Schumacher) behaved in Brazil was not good.

"His preference was that Red Bull beats Ferrari," said Briatore.

"The only one who helped Ferrari was Webber," he added, referring to Vettel's Red Bull teammate Mark Webber, who is in Briatore's management stable.

Earlier this year, a company called Intelligent Transport Services launched a bid to take over the venue in the wake of the British capital's Games.

But rival bids were also launched, including by the premier league football club West Ham United.

And the AFP news agency says the club has been named "first bidder", which is reportedly a "major step" towards West Ham becoming the permanent tenant of the stadium.

"We had four good bids, as everybody knows," said London mayor Boris Johnson.

"The bid that has been ranked top is West Ham United. I am very pleased about that," he added.

"It will, if it goes through, mean a football legacy for the stadium but there is still a lot of negotiation to go on … about the terms of the deal."

McLaren had fastest car of 2012 – analysis
(GMM) McLaren fielded the consistently fastest car in 2012, an analysis has shown.

According to the German language Speed Week, although Red Bull and Ferrari ended up fighting for the title, it was McLaren with the consistently faster car, based on an averaging of race laps throughout the 20-grand prix season.

Based on all the fastest race laps this year, McLaren was just 1.8 tenths from perfection, the report claimed.

Champions Red Bull came in second with an average of 3.8 tenths off the best, followed by Lotus, at seven tenths.

Ferrari was just fourth, with an average deficit of 7.5 tenths.

"We have to make the normal gains over a winter and Red Bull and Ferrari will be flat out doing that, as will the other teams trying to catch up — Lotus and Mercedes," McLaren's sporting director Sam Michael is quoted by the Sun.

"But we're pretty confident we can do the right things over the winter and start off strong. We're going to Melbourne to win," he insisted.

Another analysis, by Germany's Auto Motor und Sport, shows that if the 2012 championship was in fact divided in two, a McLaren driver would not have been the champion or even the runner-up of either half.

Based on the first ten races, Alonso would have beaten Red Bull's Mark Webber to the title by 40 points, while the second-half champion was Vettel, with a 45-point margin over Spaniard Alonso.

2014 aerodynamic regulation changes dropped
The FIA has agreed to drop planned changes to bodywork in 2014 that was aimed at reducing downforce.

With the new engine regulations taking effect, the bodywork changes were designed to increase the efficiency of the 2014 cars. However, following a meeting of the World Motor Sport Council (WMSC) in Istanbul, the FIA has announced that the current regulations will remain stable.

"Changes made to bodywork design, originally aimed at reducing downforce and drag for increased efficiency, have reverted to 2012 specification," read a statement on the FIA website.

Those changes are also allied to amendments to the 2014 engine regulations, as "a number of changes have been made to the power unit regulations with the aim of limiting technology in some areas in order to reduce development costs."

The FIA has moved ahead with changes to the DRS regulations for the 2013 season following.

Under the new change, the use of DRS in practice and qualifying will no longer be free and will be restricted to the same zone that will be used on race day.

Another revision to the sporting regulations will see the team personnel curfew extended from six to eight hours on Thursday night, while only two exceptions will be allowed during the season as opposed to the four that were allowed in 2012.

Finally, the FIA confirmed it has postponed the introduction of cars running exclusively under electric power in the pit lane until 2017.

A dramatic start to the 2012 campaign saw seven different winners from the first seven races, with the unpredictability being heavily attributed to Pirelli's new rubber. However, as the season wore on and data was gathered at various circuits, Hembery said teams were able to understand the differences and 'dominate the situation'.

When asked by GPUpdate.net if increased degradation and wider operating windows are expected in 2013, Hembery replied: "That’s pretty much it. There’s a more rapid warm-up and more temperature going into the tires, basically because they are working harder and because we’ll have a bigger footprint in cornering.

"With the changes we’re making to the compounds we’re trying to bring back some degradation levels, because quite frankly at the end of the season we were in negative degradation and maybe not where we were asked to be. We were maybe repeating some races from the past where we were down to one pit-stop and I’m not going to say it was too easy, but teams were dominating the situation."

Hembery also discussed the development Hard tire rolled out in Brazil, with teams and drivers attempting to understand the tweaks in store for the 2013 campaign.

"It was only a limited amount of driving and it was on a green track as well, but overall it pretty much matches what we saw in our own testing," he added. "They didn’t try any of the new compounds, it was the existing Hard tire that they used, but it showed us that the improvements we were looking for we could find. Some found more, some found less and some didn’t find anything so it was a bit of a mix throughout the field.

"I think it allowed them to get an idea of the direction we are going in and the main point was that it didn’t dramatically upset the balance of the car or at least in a way that they couldn’t change with normal developments to maximize it for next season."