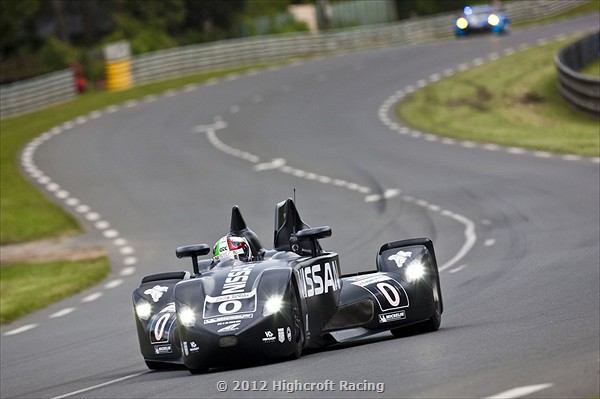 While it may not have been eligible for silverware at the 24 Hours of Le Mans or Petit Le Mans, the Nissan DeltaWing’s contribution to motorsport innovation has continued to be recognized with Autosport Magazine awarding the car its Pioneering and Innovation Award at the prestigious Autosport Awards in London overnight.

The unique Nissan DeltaWing features the performance of contemporary Le Mans sportscars but consumes only half their fuel and tires, using half of their power, aerodynamic drag and weight.

It has gathered a collection of accolades in recent weeks including the Evo Magazine (UK) Innovation Award; Automobile Magazine’s Racing Car of the Year and a Popular Science “Best of What’s New" Award.

Bowlby recently received the Royal Automobile Club’s Simms Medal and scored the Dino Toso Award for the racecar aerodynamicist of the year by Race Tech magazine.

The car was also nominated as a contender for the Autosport Awards Racing Car of the Year.

“What made the DeltaWing stand out from other contenders for the Pioneering and Innovation Award is traditionally the winners are for something underneath the skin of a race car which the man on the street would really struggle to see or even understand," Autosport, Editor-In-Chief, Andrew van de Burgt said.

“No matter whether you are a hard core motorsports fan, or somebody who doesn’t follow the sport at all – one look at the car and you can tell that it is totally different from anything seen before.

“It really is a credit to everyone involved in the project. It has generated great interest amongst our readers and we look forward to seeing the car compete again in the future."

With its long slender nose and Michelin front tires which are only four inches wide, the Nissan DeltaWing competed at Le Mans as an experimental entry under the Automobile Club de l’Ouest’s “Garage 56" concept.

Originally announced at the 2011 24 Hours of Le Mans, the Le Mans-spec DeltaWing was unveiled later that year at Petit Le Mans in September with Michelin joining as the first technical partner.

Nissan’s contribution as chief technical partner was announced just prior to this year’s 12 Hours of Sebring with its 1.6 liter DIG-T turbo engine pushing the car to easily match the ACO’s requested 3 minute, 45 second pace at Le Mans.

Nissan factory drivers Michael Krumm and Satoshi Motoyama joined Franchitti in the car at the 24 Hours of Le Mans. The car ran strongly for the opening six hours of the race before being pushed off the road in the Porsche curves.

Motoyama worked for more than an hour to repair the car to get it back to pit lane. Captured on video, the courageous effort became an enormous YouTube and social media sensation and further elevated the Nissan DeltaWing’s huge fan favorite status.

The result was an incredible comeback after Jeannette suffered a 7G lateral impact from a GTC-class Porsche. The resulting roll-over and around-the-clock repair job captured the imagination of fans in the US as well (more than 1 million views of the crash of YouTube).

“While the car wasn’t eligible to collect any trophies in its two races so far, it is very rewarding that the industry and the media recognize the significance of the project," Bowlby said.

“The Nissan DeltaWing is all about efficiency and we hope this car can play a part in shaping the future of the sport.

“There are many people who have played key roles in the development of the car but I have to say a big thanks to Don Panoz’s Garage 56 consortium with DeltaWing Racing Cars, and of course the ACO.

“Nissan and Michelins’ contributions were imperative. It took a huge leap of faith from them to really make this car possible. Both signed on at a time when we had plenty of doubters saying the car wouldn’t go around corners."

After the recent Petit Le Mans success, the American Le Mans Series announced that the car would be eligible to compete as a classified entry in next year’s championship.

“We’re very honored to receive this award and incredibly grateful to our partners Nissan and Michelin for their contributions," said DeltaWing Racing Cars’ Don Panoz said.

“The DeltaWing powered by Nissan created history at Le Mans and Petit Le Mans this year and receiving awards like this further inspire us to innovate even more in the future."

Race fans have the opportunity to see the Nissan DeltaWing on display during the LA Auto Show that began on November 30 and continues through to December 9. The car is featured on the Nissan stand at the show.

The car will also be seen at the Michelin display at the North American International Auto Show in Detroit in January next year.