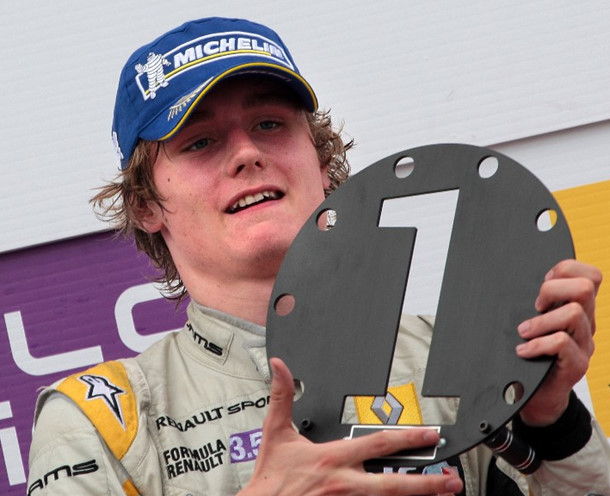 Arthur Pic, younger brother of F1 driver Charles Pic, will lead AV Formula’s maiden assault on the Formula Renault 3.5 Series in 2013 after signing a deal to race for the Spanish squad in the ultra-competitive single-seater championship.

Headed by former racing driver Adrian Valles and renowned engineer Philippe Gautheron, AV Formula will join the premier Renault-backed series next year when Arthur's experience of the 530bhp Dallara-built machine will be vital as the Spanish-based outfit looks to hit the ground running.

Montelimar native Pic enjoyed a breakthrough 2012 campaign with French squad DAMS, capturing two pole positions and claiming a memorable first victory in the series' trip to Moscow Raceway. He netted a total of 102 points to end the year eighth in the closely fought championship.

The 21-year-old's switch to AV Formula was aided by his long-standing friendship with Gautheron, who has joined the team as Technical Director ahead of the 2013 campaign. The Frenchman is among the most respected engineers in European single-seater racing and moves to AV following a glittering spell at the Addax GP2 squad. There he masterminded the success of several emerging talents, including McLaren-bound Sergio Perez and Arthur's brother Charles, who enjoyed a race-winning GP2 season alongside Gautheron in 2011 before establishing himself as a Formula 1 driver this year.

Pic has already run with the team, ending the second day of testing at Circuit de Catalunya fastest. With two seasons' experience to draw upon and the combined expertise of Valles and Gautheron, 2013 promises to be an exciting year for the young Frenchman.

Arthur Pic: "I'm thrilled to have signed with AV Formula for the 2013 Formula Renault 3.5 season and am already eager to resume testing with the team. It's great to have my plans for next year in place before Christmas and to be able to work with the excellent technical team that Adrian Valles has assembled.

"In particular, the opportunity to join Philippe Gautheron was simply too good to pass up. He is one of the top engineers outside Formula 1 and his results in GP2 speak for themself. What's more, having worked with my brother Charles during 2011 I know that he is a great guy both professionally and away from the circuit. Adrian meanwhile has an outstanding record in single-seater racing, not least with his Superleague Formula title and his runner-up finish in Formula Renault 3.5, and is now translating that success into team management.

"I have recently undergone surgery on my shoulder after dislocating it twice during the season, which undoubtedly hampered my progress. I’m recovering well and am now fully focused on getting back into the car and building towards 2013 with my new team. "

Philippe Gautheron, AV Formula Technical Director: "From the moment we received an entry for 2013 Arthur was our first choice to drive for AV Formula. I got to know the family when working with his brother Charles in GP2 and was hugely impressed by Arthur's dedication. In particular, the resolve he displayed after a difficult 2011 campaign really caught my eye. I worked with him in post-season testing and was extremely pleased with his attitude. He then built on this by showing very well for DAMS in 2012.

"Last month's test in Barcelona went perfectly. We completed our program and then went fastest on the final day. Thanks to his experience, Arthur was able to lead the team and that’s exactly what we were looking for.

"Our target next season must be to fight for the title. Arthur will move to Barcelona so as to fully integrate himself within the team and we will put in a great deal of effort between now and March to achieve our goals."

Pic will be in action for AV Formula during pre-season testing which begins at Spanish venue Motorland Aragon on 22/23 February. Further tests will take place at Paul Ricard (8/9 March) and Circuit de Catalunya (19/20 March) before the new season kicks off at Monza on 6-7 April.

12/01/12 Adrian Valles' new AV entry has been confirmed as one of 12 teams on the initial shortlist to compete in Formula Renault 3.5 next year.

As revealed in October, the team took over RFR's entry for the post-season tests, but with a view to competing in the series in 2013. It has now been named on the shortlist for 2013, the only new team to make the initial cut.